Start a Conversation
Add a Photo
Turn on suggestions
Auto-suggest helps you quickly narrow down your search results by suggesting possible matches as you type.
Showing results for
Search instead for
Did you mean:
Post in Trending at Sephora
Posted 10-19-2021 | Updated Sunday

@Ispend2much6 @This sounds so stupid. I’m saddened to hear of birchbox’s demise but just annoyed at how stupid their “pivot” is. Tell me how my health will impact my beauty choices?  Like yes someone who is in menopause will need more moisturizer than someone who is not but other than sweeping generalizations you can make based on someone’s reproductive life stage I’m not sure how my physical health is going to impact what kind of mascara I like.

@Ispend2much6 @itscarin All this "gimme your data including medical information to help you with your beauty choices" is a little too much of the lies, just say you want my data for monetary purposes and go. I'd rather go to a dermatologist or a someone specialized in health for advice on my beauty choices than give up my private health information like my vitamin levels and how many times I get sick a year to a company that will do God knows what with (I guess 🤑$$$ related).

While I find this proposal inappropriate and creepy, I can't help but feel like it came straight out of a great & fascinating Twilight Zone* episode.

@Nahnom  I agree!  Every time I get a covid test or blood drawn I wonder if any of my genome is being shared, and with whom.

@Ispend2much6 I stopped caring about if my DNA is taken/used/shared since I read cases in the States & Canada (links at bottom) where through pretense, police officers easily got the DNA of the suspect by using the saliva on an envelope ✉️  the suspect licked on.

In the very very unlikely & hopefully remains very very unlikely event that someone/some organization wants my DNA for whatever reason(s) all they need to do is get me to lick an envelope or follow me and pick up a soda can/juice box I was drinking out of.

Creepy: Yes. Not Moral: Yes. Is there anything I can do about it? No, just keep on not doing crimes and not doing anything unethical.

Despite all that, I do not freely give personal information (especially health-related) to apps, especially dubious-sounding apps like this one claiming that giving it your health data will help make beauty choices 🙄.

Actual police cases where they easily got the DNA by pretence. Replace DOT with .

@Nahnom   Makes sense.  You can only do so much; good to know what you can control and what you can't.

@itscarin  Excellent points.  I guess we'll be feeling bittersweet feelings as we use up our bargain-priced Oribe from Birchbox.  I don't like all this emphasis on data and metrics either; I'm a person, not a formula, and I'm complicated. 😂

You can now buy Uoma Beauty at Shoppers online.  Beauty Bakerie* will soon be available on Shoppers drug mart online and you can see some of their products listed. Uoma Beauty will physically be in select Shoppers stores "sometime in 2022" (beauty advisor).

If you look at the list of brands / sort by "New" makeup/Beauty on the Shoppers drug mart website, you can see Uoma and Beauty Bakerie.

@Nahnom Thanks for the udate for Canadians!!

Is Bite Beauty owned by the same company as KVD?  I have been trying to order one of the holiday sets for over a week, but the sale price doesn't display, only the retail price for each product in the set.

I sent an email last night, to customerservice @   bitebeauty dot com, and this is the reply I was sent:

@Ispend2much6 That's so strange . They are both subsidiaries of Kendo/LVMH  though, which is also Sephora's parent company. They also are the parent companies (with partial or full ownership) of Fenty, Fresh, Givenchy and Benefit along with a host of other brands

@Kim888   I thought Sephora and Bite were somehow related too.  I know I didn't type anything incorrectly or go to a spoof site; maybe they're consolidating some services to save money.  Thanks for letting me know I wasn't crazy (at least about this.)   🙂

@Ispend2much6 once that happened to me with the pottery barn/william Sonoma brands. I didn't realize they were related but I called about an issue and had a random conversation with the wrong brand haha

SANTA BARBARA, Calif.--(BUSINESS WIRE )--Olaplex Holdings, Inc. (“OLAPLEX”) announced the launch of its initial public offering of 67,000,000 shares of its common stock. All 67,000,000 shares of common stock are being offered by certain of OLAPLEX’s existing stockholders (the “Selling Stockholders”). OLAPLEX will not receive any proceeds from the sale of the shares by the Selling Stockholders. The underwriters will have a 30-day option to purchase up to 10,050,000 shares of common stock from the Selling Stockholders at the initial public offering price, less underwriting discounts and commissions. The initial public offering price is currently expected to be between $14.00 and $16.00 per share. OLAPLEX has applied to list its common stock on the Nasdaq Global Select Market under the symbol “OLPX.” The offering is subject to market conditions, and there can be no assurance as to whether, or when, the offering may be completed or as to the actual size or terms of the offering.

Now they're raising the price

Olaplex raised the price range for its initial public offering, which is planned for later this week.

Olaplex said Tuesday it would sell 67 million shares at $17 to $19 , up from the $14 to $16 price range it had previously set. Olaplex will trade under the Nasdaq ticker OLPX. At $19, Olaplex’s valuation could reach $12.3 billion.

Olaplex is one of seven companies expected to list their shares this week. This includes Amplitude  , the data analytics company that begin trading Tuesday  under ts ticker AMPL. On Monday, Amplitude received a $35 reference price from the Nasdaq. It opened at $50, 43% above that reference price.

Founded in 2014, Olaplex is a beauty company known for creating the bond-building category. Olaplex bond builders claim to repair hair that has been destroyed by chemicals, environment, or even age.

Advent International, a private equity firm, acquired Olaplex in January 2020; it will own 78.2% of the company after the IPO, a prospectus said. Olaplex is scheduled to kick off its life as a public company on Thursday, Barron’s reported.

Healthcare Triangle also increased the size of its deal to about 9.2 million shares . The Pleasanton, California, company had initially filed to sell 8 million shares at $4.50 to $5.50 each.

Of the 9.18 million shares, 8 million are coming from Healthcare Triangle, while shareholders are offering the rest, a prospectus said. It will trade under the Nasdaq ticker HCTI.

Quick update on Olaplex's shares. By September 30th, they had popped up to $21/share raising the company's market value to $13.6B 😮 They're currently trading at $22.94. My understanding is this "pop" is pretty common.

Sometimes I like those "recommended/suggested for you" types of ads/links that Google provides (other times I feel like they are reading my mind, especially if it is something I didn't talk about aloud).

Uoma Beauty is now in Morphe retailers (launched Sept 9, so someone else may have already posted this)

LYS Beauty came to American Sephora stores on Sept 9 (per this article shape DOT com/lifestyle/beauty-style/lys-beauty-sephora). This is why @itsfi saw the LYS Beauty Higher Standard Satin Matte Cream Blush Confident at her store. I saw another article talking about how the brand is launching in stores (not sure if only American ones) early fall with "an endcap by November" (I think the article came from Glossy or something with a name similar to Glossy?). Also in case anyone was wondering what it means, endcap means promotion display.

Hopefully it becomes available in Canada (and international).

Thank you @Nahnom! I’ll keep an eye out for the display in November. 😃 If one of the stores near me carries the serum foundation, I’ll try to post some swatches for folks. Fingers crossed that they will be in store in Canada and internationally. 🤞🏼 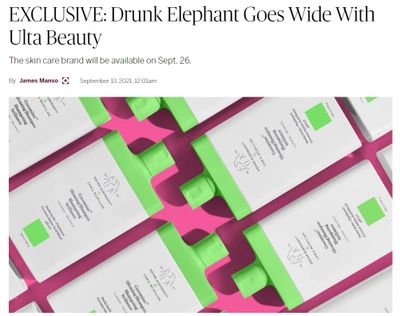 Was not expecting this, but Ariana Grande is launching her own makeup line called r.e.m. beauty and first product to release will focus on the eyes, which I think matches the name she picked and is very on brand. 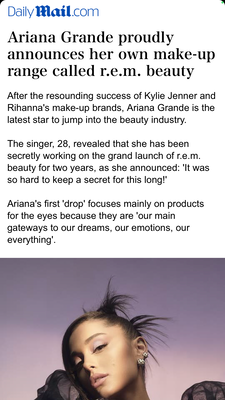