Start a Conversation
Add a Photo
Turn on suggestions
Auto-suggest helps you quickly narrow down your search results by suggesting possible matches as you type.
Showing results for
Search instead for
Did you mean:
Post in Trending at Sephora
Posted 07-13-2017 | Updated yesterday

We’re starting this thread for you guys to report any issues and weird things that you are seeing or ask any questions. We have a number of issues logged that we are already working on a fix for, so this is a work in process.

Some things to note as you are reporting issues:

It’s good to see you all and thanks for being patient!

Whenever reporting a bug we need as much info as possible or our tech team cannot reproduce the issue and verify it's actually occurring. If they can't see the issue they cannot fix it. You cannot overshare details, test on too many devices or share too many screenshots... The more detail the better!

A couple more things I've noticed and know a few others have noticed too, but I still wanted to mention it.

The threads do not include an OP or a posting date, so a lot of really old threads seem to be popping up and we don't know until we open it. Is it possible to include those in the header?

I'm still seeing a thread nesting issue as well. I believe it was a bug, but if it's a setting (and it's been confirmed to work), will someone please let me know so I can adjust mine?

I like how it looks on mobile, it's much easier to work with and navigate which is great, but it does not look great on desktop. Does Lithium do platforms that have a mobile version and a desktop version? Some platforms are able to expand and collapse based on the device (like Sephora's own mobile site vs. desktop version). Right now it feels like it's been optimized for mobile use and desktop use is running a larger version of the mobile platform.

Last one, I promise. I am not overly concerned about "followers" and "following," I won't do anything with it, it won't serve a purpose to me. What I do not like, however, is the "top contributors" bar. Those of us who use this frequently know who the top contributors are, and they know we definitely appreciate them very much for their efforts, I'm just worried it will invite more bullying, trolling, and threatening. Users have been targeted specifically for their "popularity." I don't think it's something that really should be be advertised. This isn't a contest and no one is trying to win it, there doesn't need to be a "leaderboard."

Oh, sorry! Editing to add one that thing!

The spam, ugh! Is there a way to add a multi-step verification for starting threads? They wasted no time transitioning to the new platform. Or a post limit based on time? YouTube live stream comments have that haha, it's silly, but it prevents people from posting the same thing over and over and over. I think it may also prevent some of the snarky, petty, arguing that occasionally occurs. I'm sure others will disagree with me, but sometimes the only way to curb it is to cut people off... Just temporarily of course haha. But for the spammers hopefully it will make it too much of a hassle to spend the time waiting to keep posting.

@KatieBT,  The main feed is filling up with spam again. I reported as many as I could see.

Mobile...while I do appreciate having the display optimized for mobile, I actually miss being able to resize pages on my phone at will. I could zoom in on pics/text as needed, and zoom back out to my heart's content.

I don't see an option to add spoiler tags on mobile. Am I overlooking it, or is it really not there? EDIT: Never mind, found it...wasn't expecting spoilers to be a warning triangle. Not sure what I thought that triangle was, but I didn't think it meant spoiler. I guess I get it now lol.

Mobile is also taking entirely too long to load. When I click to a thread and start scrolling down, the page scrolls me back up to the top two or three times before it finally finishes loading. It's frustrating to wait forever for it to finish loading, and equally frustrating to go ahead and start scrolling just to be bumped back to the top. This is especially obnoxious on large, pic heavy OP's like the Promo Code thread.

I'll also second or third or fourth other requests to please please add page numbers to the tops of the pages. If going to the next page is going to drop me out at the bottom, I have to scroll up to see the posts, then scroll back down to get to the next page.

Old posts are moving over with either huge numbers of missing posts, or else the sort order is completely out of whack (not sure which, as I'm mostly looking at large posts with thousands of replies, and I haven't dug through any to figure it out). For example, the Ulta GWP thread made it back over today, but the most recent post it displayed was something like Jan or Feb. I know folks have mentioned this regarding other migrated posts as well...just wanted to underscore the problem.

Hey there, me again. 🙂 There seems to be an issue where when scrolling through threads under a group, the shown reply isn't the newest one. Is that a sorting issue, or a bug?

@KatieBT Thanks for all you're doing to help!

@lachaton The 'preview' tab may help a little with the spoiler issue. It's not quite what you're looking for because it's not within the text box where you're replying, but you can use the preview tab to make sure the post is formatted the way you want before you submit it.

I wish I had something interesting to spoil. Here's a llama being fabulous.

@KatieBT. I have a question about replies. When you reply to someone you can only see the person you are replying to and not the whole thread… Is there a way to change that so you can see the whole thread? Sometimes I reply to more than 1 person in one post and want to see everything not the just the post I am replying to. Thanks!

A couple of suggestions:

- Add the ability to reply many more times to the same thread.  There seems to be a limit.  Really annoying!  This may have already been reported.

- Add the ability to reply to replies.  It seems you either can't do this or there is a limit.  Also really annoying!  This may have already been reported.

@KatieBT  I know it will take a few days before everything is migrated and I submitted a list with missing threads but would it be possible to get the PAT McGRATH LABS migrated since she is releasing new products now. It would be nice to have access to all the info. Thanks! 🙂

Spam all over the board this morning. 😞 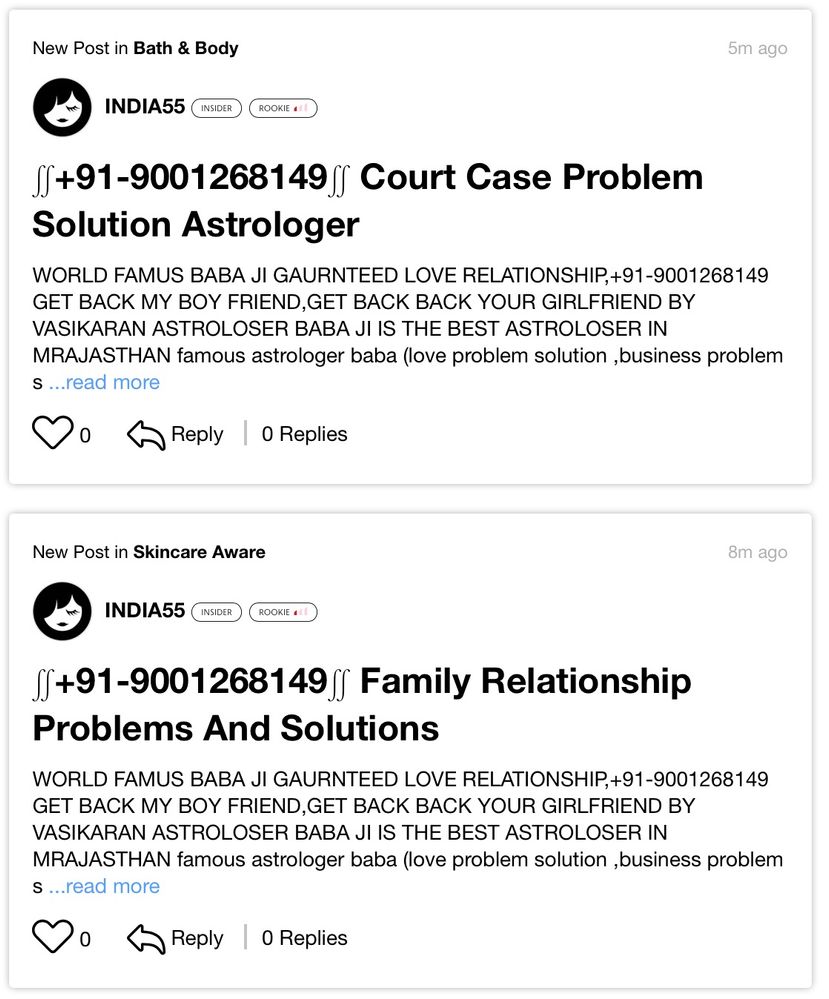 They will never stop. 😞

Can we also get an "other options" button (the button with the 3 dots that leads you to more options for each post) on the "preview" of each post so that we can report inappropriate content (ex. spam) without having to actually click on the post to find the "report" option? Sorry, I really suck at describing 😞

Everything that was posted since June 6th is missing from The Party Thread. Is the content still migrating?

ETA: or is the order just screwed up?

The same thing is going on with a few other threads (like Mermaids & Unicorns and Beauty Pet Peeves 2) that reappeared today.

Is it possible to create your own group and if it is how can you do it?

No solution for these pesky spammers on new BT either?!

Yeah, I'd really like to see an anti-spammer solution as well.

Yes, can anyone please stop these spammers?

@KatieBT Some posters mentioned that there had been a video tour and tutorial of the new site which I somehow missed. If it's still available could you post a link? I'm still trying to find my way around. Thanks!

What Are You Wearing Today?

I swear I saw the WAYWT thread at first and now I can't find it!

2 Replies
Conversation Stats
Photos175
Are you sure you want to uncurate this?
Cancel OK
testing