Start a Conversation
Add a Photo
Turn on suggestions
Auto-suggest helps you quickly narrow down your search results by suggesting possible matches as you type.
Showing results for
Search instead for
Did you mean:
Post in Nailed It
Posted 11-26-2022 | Updated 36 seconds ago

😅 Their polishes are hard to resist from @makeitup305 ! Looking forward to seeing which ones you got! 😃

@Saradestin which one’s your favorite so far? Did you have an easy time using the magnet? I bought some but have never used one before.

@makeitup305 So far I have only used two and it is difficult to choose a favorite because they are so different. I have used Raven (matte) and Smokescreen (magnetic) If I had to choose one, I would probably go with Smokescreen because I love the gray/pink combo but Raven is so pretty!. The magnet worked perfectly and much better than my temporary DIY tool.

I still have other two other Mooncat polishes to try and I will be able to tell how much I like them after testing how they perform. In the bottle they look gorgeous!

Wow, amazing color and shifts, @Saradestin !  I love gray/black and pink together so this is a really great polish! 🖤💖🖤💖

Thank you so much @Titian06 ! This is a really beautiful polish!

Let's get the China Glaze holiday collection out of the way before my bazillion BF polishes start rolling in...otherwise they're likely to get ignored for eternity 😅

I watched both the Janixa and Phoebe Moon swatch videos after I'd already ordered; both of them were pretty meh about the whole set, and I let that be a bit of a demotivator for me, so these have been sitting in the background for a while now. I have to say though, I'm much more enthusiastic about them after trying them, and while the whole collection won't be for everyone, if you like glitter, I'd bet a few will tickle your fancy ✨

I wasn't sure I'd get any of them to full coverage, so I started with a base of Revlon Pure Pearl, a shimmery soft white. I think these would also look amazing over black, or a coordinating cream, or a contrasting cream...pretty much anything, really, the color combos are endless 🌈

She's Icy: tiny silver glitters and larger silver shreds. One coat on my pinky and two on my ring. This one had a bit of a weird formula, it came out on the brush like I'd dipped it in jam, all clumpy and blobby, but still managed to spread really easily and didn't gum up on the nail. Intense concentration of the shreds maybe? In any case, I'm a bit nonplussed by it as a topper, but the fact that it built up so quickly and easily was really nice, and I love it as a nearly full coverage glitter bomb.

If It Sparkles It's Mine: looks like a basic rose gold in the bottle, but on the nail I can see distinct light pink and copper tiny glitters plus larger copper shreds. There's also a tiny pinch of holo glitters in here for some subtle pinpoints. I like this one way better than I thought I would back when I assumed it was "just" rose gold 😋

I Speak Glitter: small blue and green glitters with holo bar glitters. One coat on my index, and I think I put three on my thumb. Lovely combo! 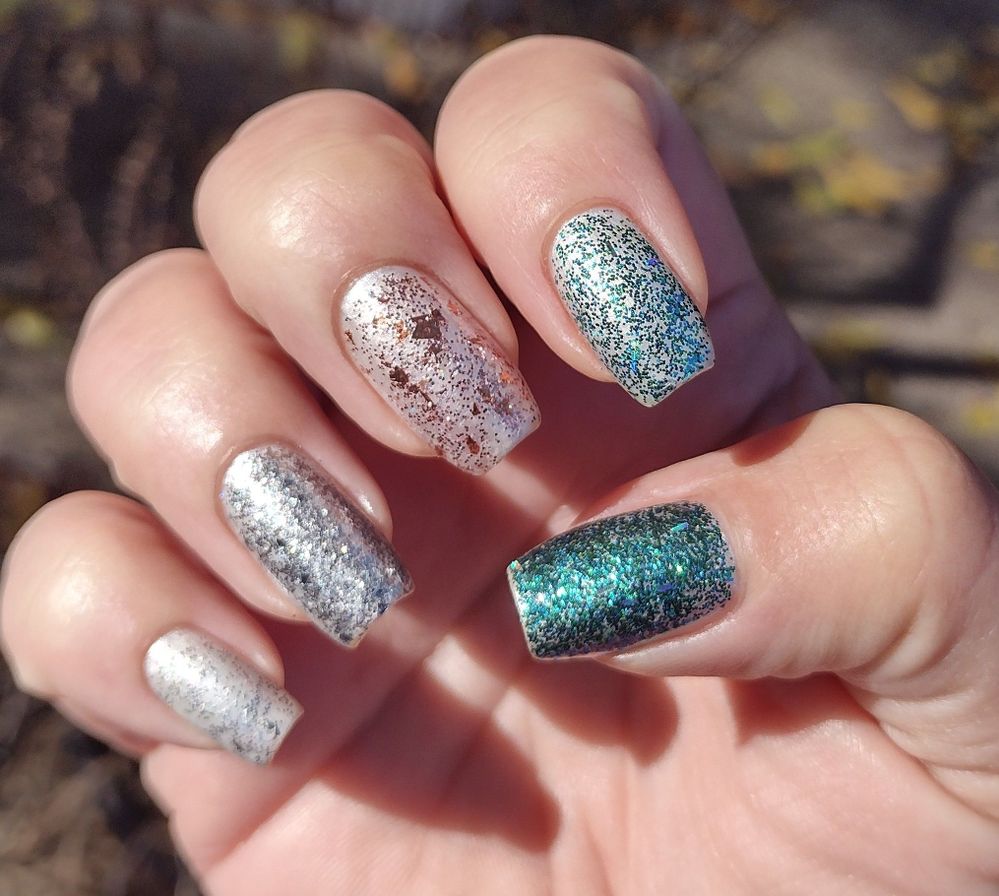 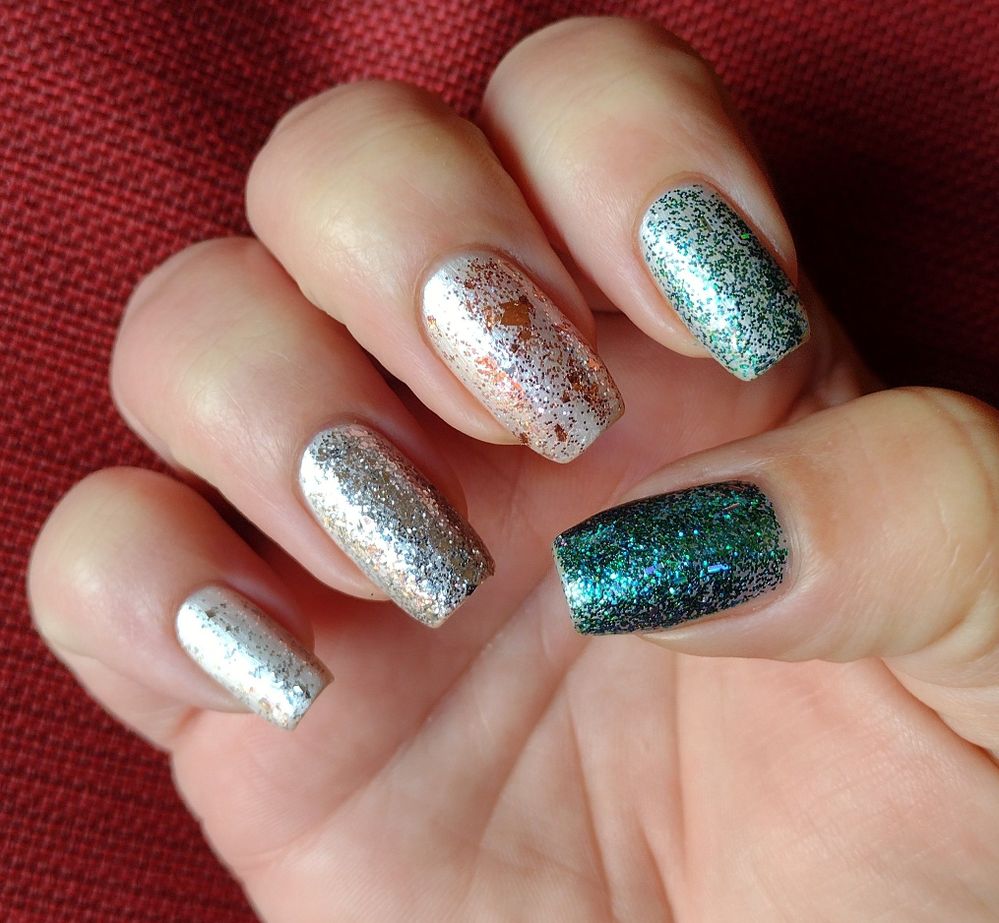 Get Your Glitter On: looks plain red in the bottle, but putting this one on reveals it's a mix of tiny baby pink and red glitters with slightly larger red glitters. This one also has a smattering of small holo glitters. Three coats on my thumb and one on my index. I think this one looks amazing built up to full coverage, though I'd maybe do a coat of red under it to hide the thinner coverage around the edges.

Queen Of Bling: the most basic mix of all of these, this appears to be just two sizes of gold glitter, tiny and small. No holo, no shreds, no nothing weird. It's dense enough that I think it would get close to full coverage in 2-3 coats if desired.

Glitter Is The New Black: my eyes are having a devil of a time trying to pick out the components in this one, but I know I see tiny black glitter, black bar glitter, black holo bar glitter, and tiny silver glitter. Might be some black shreds too? Can't tell if the irregular shapes I see are actual shreds, or just bars and glitters overlapping each other in a jumble. The formula was similar to the silver one in that it seemed very blobby on the brush, but it laid down smoothly without getting gummy. Two coats on my ring (I think...or was it three, I've lost track) and one coat on my pinky. 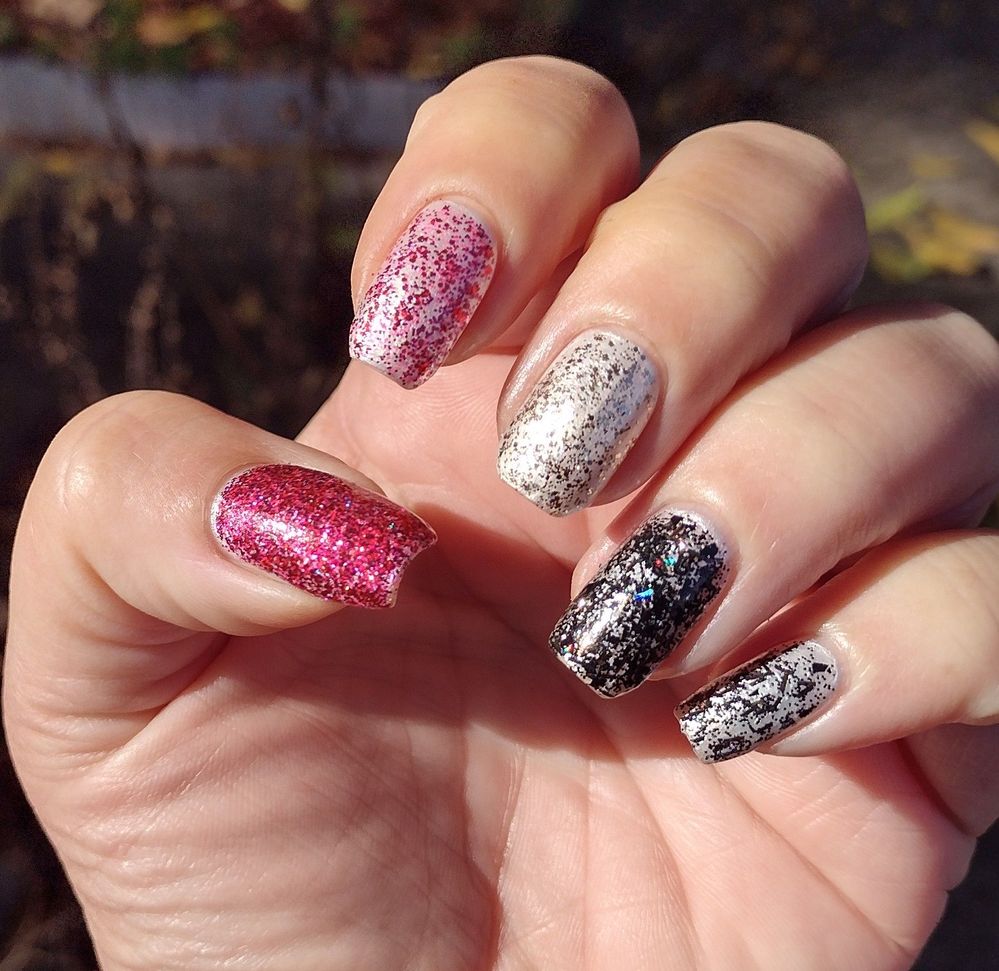 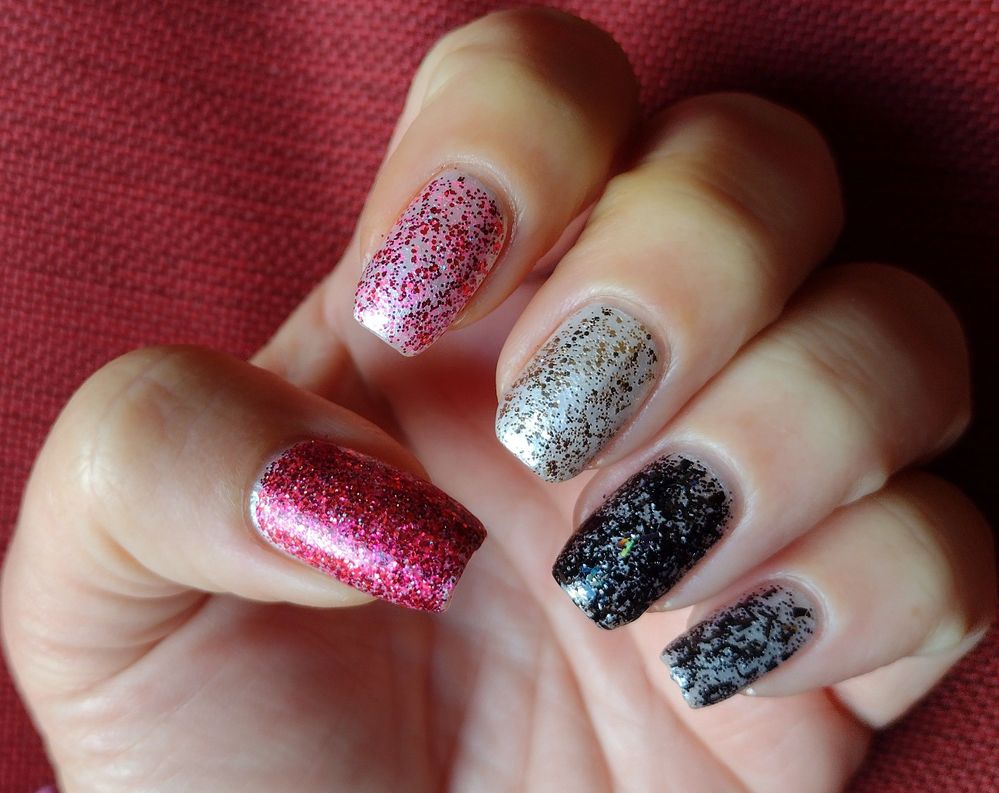 @RGbrown Perfect mani for the winter. I love all the different flakies on your right hand.

Thanks so much! I'm really digging on these more than I expected to; I mean, I always love glitter, but I had such low expectations after watching some swatches that they could do nothing but get way better than I realized they'd be lol  ✨

My brain froze at "glitter isn't really my thing"...I recognize all the words, but I can't comprehend them as used in your sentence?! 🤔 😂 Ha!

If It Sparkles It's Mine would look amazing over your warm toned Zoya mani!! 😍 And ooohhh, I bet the red over 7th & Flower would be divine too!

How beautiful @RGbrown ! I am a glitter obsessed  enthusiast so I am loving all of them so much but “If It Sparkles It's Mine“, not only is beautiful, but it perfectly defines me! 😁

It's ok to be glitter obsessed 😄 The bright copper tone to that one is stunning!

@RGbrown  Oh wow. Lovely I Speak Glitter and Get Your Glitter On are my favs .  Thanks for showing them😀

Those are fabulous choices! Thanks so much! ❤️💚

Ahhhh, glitter!! 😍 These look amazing @RGbrown! I Speak Glitter is really speaking to me. Gorgeous. It would be fun to play around to see how all these sparklers would look under a different base color. I think these would dazzle paired with so many different shades. ♥️

Sets like this almost make me wish my collection were smaller, just so I could have a little more time to really play with mixing and matching base colors and toppers to explore the possibilities a little deeper! I am going to try and keep these in mind as holiday toppers though, and try to remember to add at least a couple to some festive manis 🎄

I did these the other day but didn’t like the combo so they came off the next day. 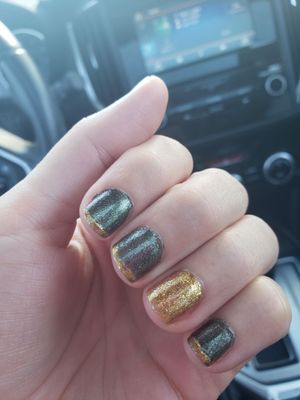 Currently wearing ILNP Gaia, the flakie version that was discontinued. I should’ve used a base coat since 3 coats is still not enough coverage but I still like it. 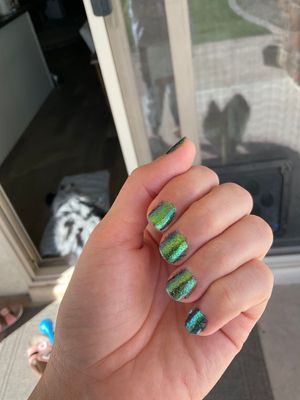 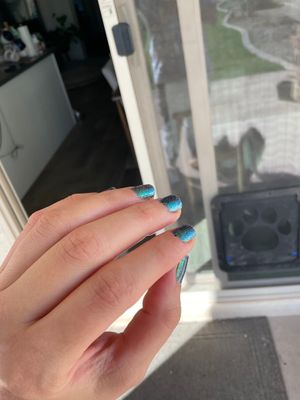 It's pretty, but not for your taste @makeitup305 I don't do my nails for work reasons but love watching all of your experiments with color 🥰

@makeitup305  Both are pretty.  This green is a beautiful green 💚

I like both manis @makeitup305 , but I understand not being convinced with how your plan came out. These things happen. The good thing is that it has an easy fix.😁

I don’t have a very creative mind so I struggle thinking how to combine my polishes. I am better at copying 🤪

12 Replies
Conversation Stats
Photos3,098
Are you sure you want to uncurate this?
Cancel OK
testing