Start a Conversation
Add a Photo
Turn on suggestions
Auto-suggest helps you quickly narrow down your search results by suggesting possible matches as you type.
Showing results for
Search instead for
Did you mean:
Post in Nailed It
Posted 09-26-2022 | Updated 53m ago

@ather, between Hailey Bieber's chocolate glazed nails and autumn being upon us, I can see brown polish being on trend. Chanel's fall collection included a ton of nude and brown polishes and I've seen a few polish sets centering on brown shades. I'll have to check my toppers to see if I have something that will work with a brown polish and keep it looking brown. I love your "more testing is needed." I've been experimenting with other polish combinations for that glazed donut nails look.

I lol'ed at your comment about always wanting to change your nails. I feel that. I think what keeps me from rotating a mani more frequently is time. I normally do my nails in the evenings but I'm just too impatient to have them completely dry so there's often smudging by morning; or, sometimes there's polish on my sheets. Whoops. 😫

@itsfi  you are so funny. I am happy that I am staying on trend!!! Good to hear Chanel is doing browns and nudes! I need to check the new Chanel lineup! I’ve been doing gels so no drying time for me 🤣

I love it @ather !  Heading to Dunkin right now 😀

@ather  That brown looks like a perfect chocolate donut color to me. Well done!

@WinglessOne  Thank you!! I wanted a more light brown but it works! I am still happy how it turned out!

I'd say you nailed the glazed donut look 😁 These look great!! 🤎

@RGbrown  Thanks! It took a few try’s but I’m happy with it. I also think the right chrome powder helps!!

@Mellmars1185  Thank you! Still need to perfect my nails tho!

@ather @ They look great to me but i know the feeling!

Purposely ignoring the first day of fall because it's been back up in the 90s here for the last week or so (until today, now it's 70...guess I angered the gods and they are trying to remind me of my place ‌😂‌)

Hopping in the wayback machine for a trip to 2015 with OPI Color Paints! I found the 6pc mini set at NailWholesale and desperately wanted to give OPI's jellies a shot. ‌❣️‌

The full collection had 8 jellies and a silver foil to use as a base; the mini set I picked up has 5 of the jellies plus the silver, aka the perfect amount for a fun skittle set. I decided to do up some simple art to showcase all of them, both with and without the silver base.

All nails have two coats of the jellies over a clear base coat. Let that dry, then I just used the bottle brush to draw three stripes of silver side by side, each a little shorter than the one next to it, and then repeated the same thing with the jellies over the silver, just a little lower.

Pink, orange, and yellow are *amazingly* smooth and easy. Flawless color distribution, zero streaks or fussiness of any sort. You'll never build to full opacity with these, but the level of pigmentation is amazing nonetheless.

Purple and turquoise were not so nice. Streaky and difficult on the full nail, I finally just dropped a blob near the cuticle and hoped for the best, knowing that would be all that showed anyways. There are streaks over the silver too, but it becomes more interesting and less of a headache there, since I wasn't worried about coverage at that point. These could probably be built to full coverage, or close to it, even without a base, as they get pretty dark pretty quickly.

Full size bottles with bigger brushes might have helped these two a bit, but I perused a few blog posts from 2015 reviews, and they were pretty universal about them being problem children.

The silver is just a silver foil. Not particularly noteworthy or something to seek out specifically. It's a bit streaky, even just doing short lines like this I had to patch a few spots, and I'm sure I have better silvers in my existing collection. 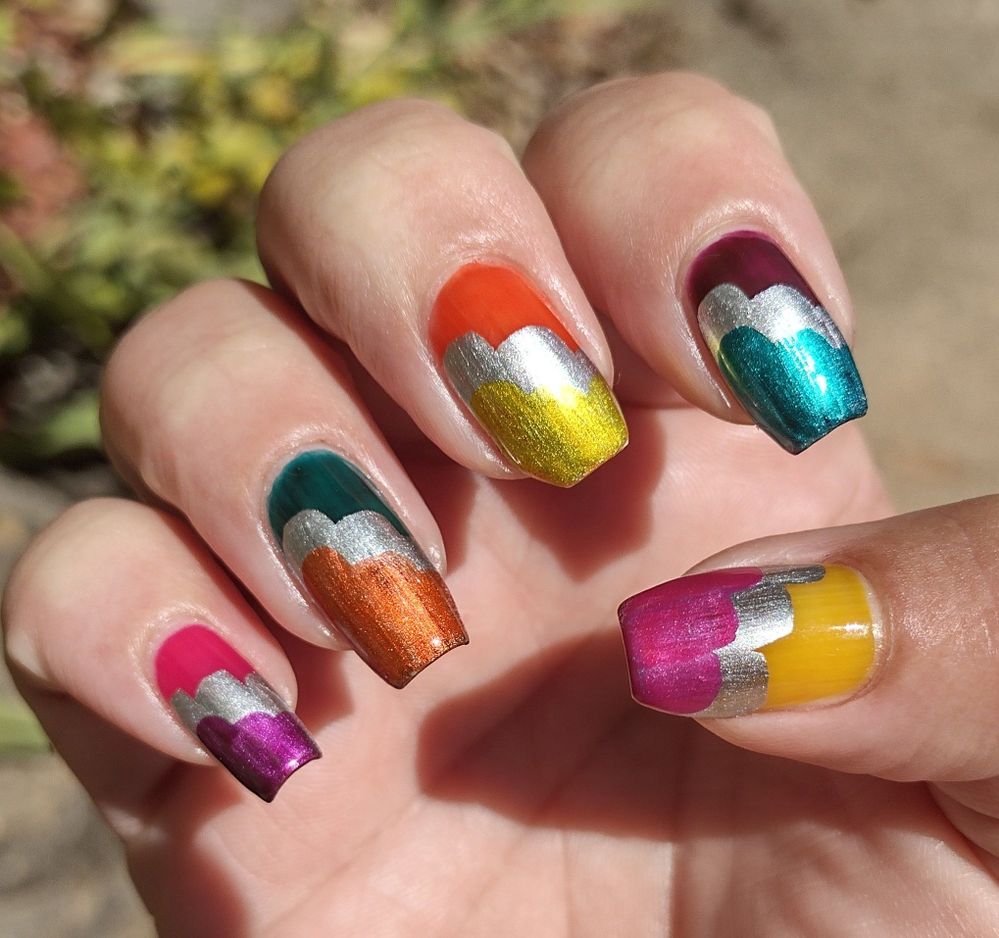 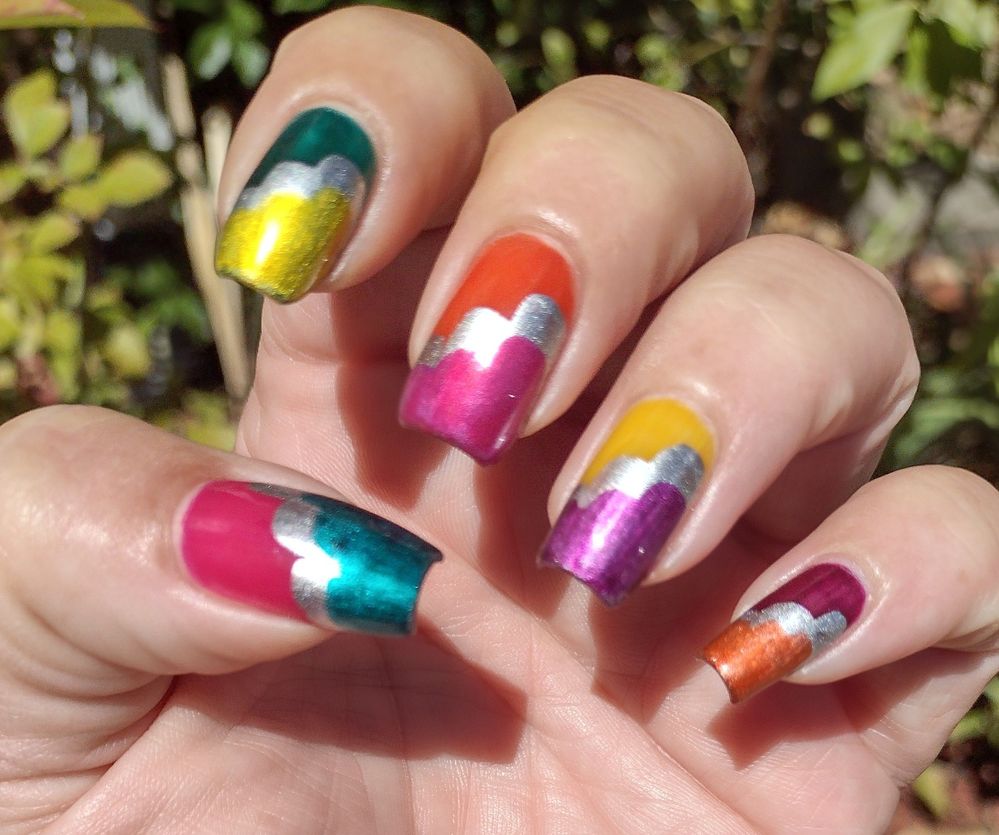 There are three more shades in the collection, a deeper red-pink, a bright grass green, and a deep blue. I spent a little time looking for them last night and assembled a cart...am holding off for now, but they're rolling around in the back of my mind ‌🤔‌

Wow! Such a stunning mani! You always bring the most gorgeous designs and color combinations @RGbrown ! Spectacular! ❤️❤️❤️

Thanks so much! This was fun to do (and easy too, which is always a plus 😁) 🌈

That doesn’t look very easy to me @RGbrown  😅😅😅

This one falls under "looks more complicated than it really is"...it's literally just three straight lines with the brush, each a little shorter than the previous one to create the wave pattern. Super easy, I swear! ❣️

They are beautiful @RGbrown!  These colors are terrific w/w/o the silver.  Very creative mani!

Conversation Stats
Photos3,140
Are you sure you want to uncurate this?
Cancel OK
testing