Start a Conversation
Add a Photo
Turn on suggestions
Auto-suggest helps you quickly narrow down your search results by suggesting possible matches as you type.
Showing results for
Search instead for
Did you mean:
Post in Insiders
Posted 11-20-2017 | Updated 03-18-2020

Anyone who picked this up, what were the colors?

@tinobiscuits I didn't redeem this one, but it lists the shades on the product page. The lipstick is the shade Sweet Cream and the lip liner is #068. Based on online swatches, they're much lighter than they appear in the picture. Hope this helps!

it is sold out since yesterday.

it is sold out since yesterday.
3
Reply
3 Replies

if anyone ever has a promo canceled because it goes out o...

if anyone ever has a promo canceled because it goes out of stock contact customer service. they can sometimes send you a different promo or at least offer you points
5
Reply

RE: it is sold out since yesterday.

How do you know? I placed an order at around 2am and it went through, I added extras to get this promo, I will be disappointed if I don't get it:/
3
Reply

I got it today

I got it today
3
Reply

Thanks @Natalian and @KNC24. Code updated above, picture update to follow soon.

@Lazybeautybeast thanks for updating the thread.
3
Reply

bite beauty promo with a $35 buy in vibbite 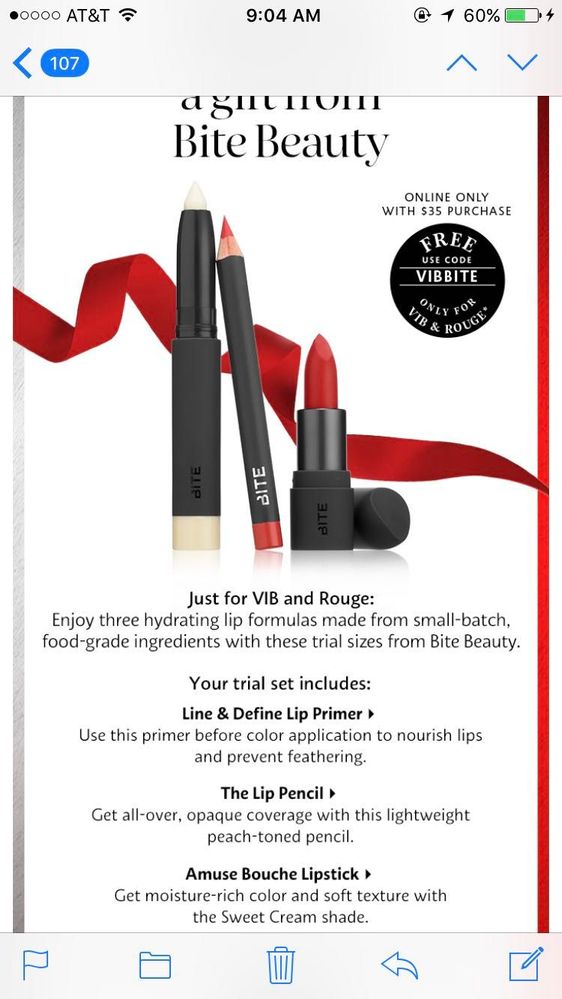 Also not a promo, but looks like the rewards bazaar is dropping new items everyday instead of just the regular tues/thurs schedule...which I just realized is just today and tomorrow 😕

Not quite a promo code, but hope all Sephora promotions are welcome here!  I was surprised to see this banner for 3X points on all purchases from now until the 19th, Sunday! 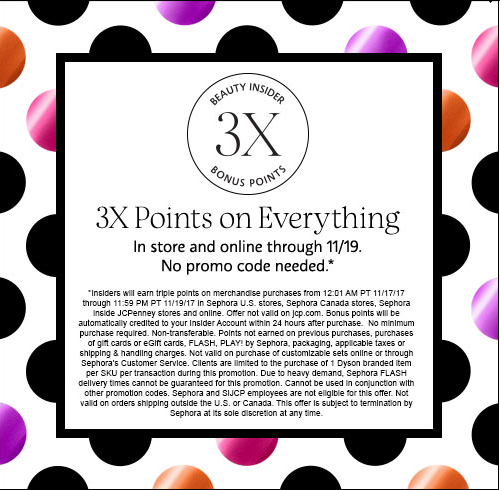 Yippeee!  Triple points to use on rewards that sell out before we even see them!  Obviously I mean that sarcastically but we all know the rewards situation rings true and they should fix that.

Thanks @MlleCC! Point multipliers are good here too. I'm...

Thanks @MlleCC! Point multipliers are good here too. I'm just not going to add to the main post, mostly because it is only 2 days and I'll probably forget to remove it later. lol
7
Reply

A small public service announcement for anyone using the AROMA/SPRITZ code and just wanting one of the two Armani fragrances (or was I the only one not wanting the pair? lol)

RGbrown - I respect your efforts in the name of science 😜

@RGbrown Thank you, I ordered the women's version, too & of course it (finally) just shipped! *sigh* Can't decide if I should just forget it or place another order...

I wanted two women's for stocking stuffers, but screw it.. my sisters will get $8 Pacifica from Ulta instead...cheaper than trying to place another $25 order. 😛

@RGbrown Haha good plan! Yeah I don't think it's worth it, I'll just add it to what I'm giving my boyfriend for the holidays. What's funny is I had initially clicked on the men's mini, thinking of him, but then I couldn't stop looking at the notes for the women's & I was like, "Well... he already has so many fragrances" (like I don't lol). I was curious about the scent, but I can just go get a sample (I really should take more advantage of this) 🙂

If you place any Ulta orders, select the fragrance sampler...I got the women's as a sample there recently as well 😄