Start a Conversation
Add a Photo
Turn on suggestions
Auto-suggest helps you quickly narrow down your search results by suggesting possible matches as you type.
Showing results for
Search instead for
Did you mean:
Post in Lip Lovers
Posted 07-12-2018 | Updated 07-18-2018

Kudos to Kylie and the Jenner/Kardashian clan! Kylie was named the YOUNGEST-EVER SELF-MADE BILLIONAIRE.  Was she really self-made though? What are your thoughts about celebs using their fame to launch beauty products? Why do we all fall for it? 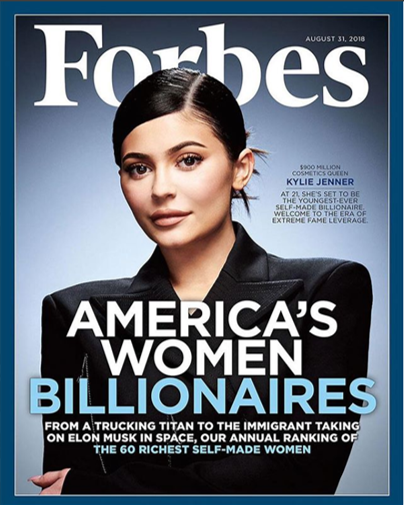 I am not a fan of the Kardashians, but I don't think it matters if she is self-made or not. Just because she grew up in a wealthy family does not guarantee success. It may make it a little easier if people have heard of you or you may not need to take out a business loan, but you still have to put in a lot of work and have a vision for your company. She could just as easily waited for her inheritance and done nothing. Also, some children of celebrities end up having a tragic life of drug addiction, alcoholism, etc. Good for her if she has found something she obviously enjoys. I would also rather her put out makeup, then make episodes of a bad reality TV show.

I have a couple of her lip kits, and while they are ultra drying and the lip liners are cheaply made (i.e. the entire "color/lip liner" portion falls out of the "pencil") they are beautiful colors. However, the reason I stopped buying into her is mainly because of the quality vs the price tag. I can get equally better lipsticks for her price or a tad more at Sephora and they aren't as drying. She does however have a wonderful marketing team behind her, because I can see the appeal from her makeup line.

To the question of whether she was self-made? No. She came from money and had a huge head start into the business. It's not as if she became an indie brand and worked her way up to get to where she is now. We all knew she was going to get people to buy her stuff regardless because she is a Kardashian and the Kardashian Klan is pretty popular. She was set to make it and didn't have to struggle like many self-made smaller brands have had to.

I personally have no issue with celebs trying to launch their own makeup brands though. I mean heck, look at Rihanna's line! It's wonderful and she even started the push for other makeup brands to stop with the BS and pursue more darker shades for women of color. I think celebs can have both a good and bad impact on the makeup industry and they are free to start a line if they want. However, calling them self-made maaaay be a far stretch.

Here's what I don't get -- does anyone actually buy her products?  I don't, nor do I know anyone who does.  I'm not sure where all her phantom customers are coming from.  I would never buy a Kylie Jenner product for the same reason I never bought an Estee Edit product (even when they're 50% off at CCO's or Sephora).  That family and their aesthetic doesn't appeal to me.  Everything they put their names on is ultra low quality stuff.  They are to female-targeted products what Donald Trump is to real estate.  It's all smoke and mirrors, made in China, and overpriced for what it is.

It's impressive that her brand is making so many sales, but I find it very hard to believe an 18 year old has the business acumen to pull that off on her own.  Kris Jenner, as always, is the mastermind behind this, and is very good at networking and getting in touch with the right people.

Have a superstar makeup artist come up with formulas for my new cosmetics line, get me in touch with all the right marketing people, and make me Kim Kardashian's friend on instagram. I'll be making 800 million in sales, too!

@influensterkels I think the term "self-made" is a bit much.  Comparing her to business-people who came from nothing (poverty, no connections) doesn't seem right to me.

I wonder how much involvement she has in her company, does anyone know?

@suzyo All I know is what I read on AGC blind item rehash.

@fieldsofclover I dunno what site that is but on CDAN the blind that always repeats and reveals is her cosmetics line .. insert brand here.. with her name slapped on it. Does it make her a self made billionaire? No. Does it make her/her team smart for pulling the wool over everyones eyes? Sure does.

You know what, I say good for her.  Sure, others probably deserve it more, but theres no denying that her cosmetics line really took off and her fans LOVE it!  900 million from her cosmetics line? That's crazy.  Good for her for making it on the cover.  I know many dislike that family but they sure do know how to market themselves.

Such blatant pandering by Forbes to have that particular woman on the front cover. Also, SELF-MADE?!?! For real? Words have actual meaning, and Kylie is most definitely not self-made, not by a long shot.

Interestingly enough, ABH, Huda, and Jamie Kern Lima (IT Cosmetics) are also on the list and their successes are absolutely all their own. I will never understand the current celebrity obsessed culture, for cosmetics in particular, the quality of the product should speak for itself. Celeb collabs/endorsements feel desperate more than anything else.

I've been seeing this all across twitter today and got attacked (figuratively) but I imagine you ladies are a lot more logical!

Like everyone else has said here, I don't particularly get the charm of the family and never really watched their show or bought products from any of their brands. Its hard to completely miss everything because they seem to be EVERYWHERE but 🤷🏽‍♀️.

Though I agree the 'self-made' claim is pushing the bar on journalism, I do think they deserve credit for where they are. Many people have 15 minutes of fame but I do think it takes some ingenuity to keep it going for a decade (it feels more like a century) and turning it into a financial powerhouse. They are selling their 'lifestyle' and people are more then willing to continue pay money for it. I can't imagine handling all that and heading a $900 million cosmetic company at 21, even with a lot of help. Yes it was absolutely easier for her then someone who started with nothing, but that also doesn't mean she didn't work for it.

I've never been one to buy something because it was endorsed by or had the face of a celebrity on it (except for my backstreet boys poster, no regrets 😂). I just think to have a billion dollar in sales in 2 years takes more then existing fame and instagram popularity.

@Aaliaa The mom is a ruthless, marketing, and business genius for sure! I absolutely would give Kris her due, to me, she's the entire reason for their success. The cynic in me is guessing that Kris really runs the show and makes the important decisions, but having Kylie as the "head" makes more sense when your audience is young teenage girls.

Also, take Forbes lists in general with a grain of salt. Almost all these lists are based on incredibly vague estimates and a lot, a LOT, of self reporting 🙂 All the PR & financing of Kylie Cosmetics is handled by none other than Kris herself (for a 10% cut) while everything else from manufacturing, purchasing, sales and fulfillment are all out-sourced. Kylie clearly isn't an idiot and likely works harder than most people in her situation, but there are also thousands more out there that probably work 100 times harder and will never have access to the resources she has just based on name alone. Going back to that article someone posted on BIC a while back about the cost of makeup displays and starting up a cosmetic line in general, just having the capital alone to start manufacturing and stocking inventory...no small thing.

And don't sell yourself short 🙂 I bet you'd be amazing given the chance, which is sort of my point. There are lots of brilliant women out there that could also run a successful company given unlimited resources and unlimited support, Forbes lauding Kylie as some sort of wunderkid just feels disingenuous and promotes a crappy narrative. Let's not forget Forbes also touted the genius of Theranos/Elizabeth Holmes. Yes, I'm sounding salty as hell right now but 2018 has really worn me down with its penchant for no-talent families that grift/ahem the WH  🙂

And in case it wasn't clear, I think you're awesome and you've got absolutely valid points 🙂  getting down off my soapbox...

@MissPuff,  it'd be perfectly fine with me if you stayed on your soapbox!  🙂

You are too kind @MissPuff! I agree with you I'm sure Kris (and a lot of other people) had a lot to do with it. I don't disagree with you I think I was just trying to play devils advocate a little. Forbes used her for her 'celebrity' power and I guess it worked since we are still talking about it. It is absolutely a puff piece (sorry I had to 🙈😂🤦🏽‍♀️) but I don't follow the magazine enough to know if thats expected?

On to more important notes, I'd absolutely crash your happy hour and buy the first round! @veronika23 @fieldsofclover

Ahem, I believe thats what the kids call shade. 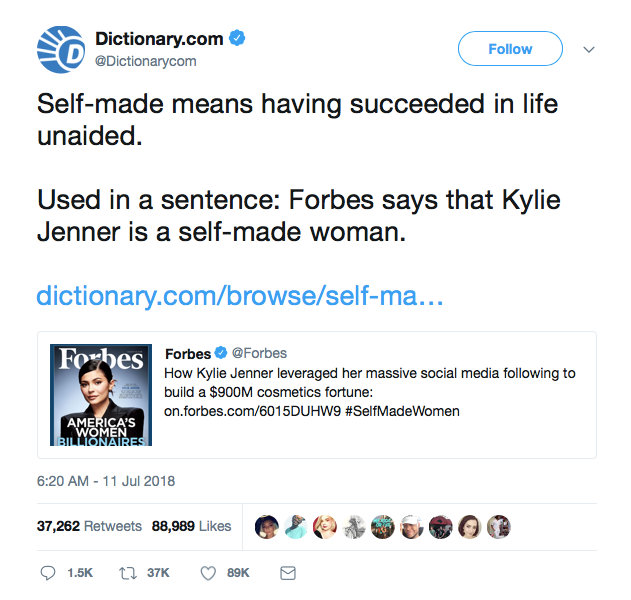 My favorite gif ever 🙂

@MissPuff I want to hit a happy hour with you and @veronika23 so. badly. now 😂

@fieldsofclover, @veronika23 Sometimes alcohol is the only answer I have these days 🙂 Let's do it 🙂

@MissPuff"Such blatant pandering by Forbes to have that particular woman on the front cover." The only thing that comes to my mind is that the devil works hard, but Kris Jenner works harder! 🤣

1 Reply
Conversation Stats
Photos4
Are you sure you want to uncurate this?
Cancel OK
testing