Start a Conversation
Add a Photo
Turn on suggestions
Auto-suggest helps you quickly narrow down your search results by suggesting possible matches as you type.
Showing results for
Search instead for
Did you mean:
Post in Haul Stars
Posted 2 weeks ago | Updated 2 weeks ago

The Tried and True OG's

This morning while getting ready I reached for a product I have been using for... I'd say at least a decade - Kate Somerville ExfoliKate Intensive Pore Exfoliating Treatment and I thought about how long I've been using it. It's one of the first products I remember that really got me interested in skin care, and I still use it to this day. Then I was thinking about all the other products I started using so many years ago, and still use.

We all have those new releases we are excited to try, a product we've had our eye on for a while and finally get, collections we love where we need every shade, or a recent fave. We'll share products that work well for us, discuss how to add a product to address the new skincare issues that's popped up... but how often do we give our first loves some well... love? What helped start your relationship with beauty that you are still using? Here are mine -

CLINIQUE High Impact Mascara Okay y'all do know I love this if you happen to see my What Are You Wearing Today posts... it's literally the only mascara I am willing to wear.

Urban Decay Eyeshadow Primer Potion - Original Standard Size - 0.33 oz/ 10 mL For real not enough people talk about how good this stuff is and it's probably cause eye shadow primer is boring.

Dior J'adore Eau de Parfum I remember years ago (like two apartments, a townhouse, and a house ago) I lusted after this perfume and got a 500 pt reward that included a small bottle and kept that for as looooooong as I cooooooould before it wasn't quite as painful to buy a full sized bottle. Still my absolute favorite.

bareMinerals Original Mineral Veil Pressed Setting Powder This might be kiiiiiiinda cheating cause to be fair it was the Original Loose Veil I wore way back when, but this was before Pressed was even a thing. I just prefer the pressed compact is all, but it's basically the same product.

Share yours, be inspired by others' loves, and reminisce on a time when your stash was significantly more minimal.

belif Moisturizing Eye Bomb , I always come back to it, the texture on it is wonderfully thick, but creamy and it doesn't irritate my eyes.

Also my brow pomade.  I have no love for kvd, and I know she's no longer associated with the brand, but this pomade is so good one, I keep purchasing.  ABH pomade is great, but I like this one a little more.  #KVD Beauty Super Pomade Vegan Eyeliner, Shadow & Brow Pigment Medium Brown

@alexasteph I was just thinking of starting a thread like this the other day! Great minds 😉 '

For me,  Tarte Shape Tape is still undefeated. Even though I have try skin, it's the best full coverage concealer I've found and it doesn't crease or get crepey on me. It's the first concealer I thought really covered my dark circles.

Marc Jacobs Tantastic (RIP) was my first high end bronzer and I still love it all these years later.

Colourpop Super Shock Shadows still get me, even if I don't wear them often. Being able to buy so many different shades for $6 each was amazing.

@makeitup305 I agree about the ColourPop Super Shock Shadows! Those are amazing, I have a pretty decent collection of them myself. It wasn’t until a few years in to my makeup journey I discovered them though, since they were an online brand for so long I had never seen or heard anything about them until I started following pages and watching videos.

@alexasteph I think I tried them either the year they came out or the year after. I've been hooked since, even if I don't wear them as often.

@makeitup305 I really enjoy their pressed powder shadow palettes too!

Lancome Effacernes Waterproof Long-Lasting Undereye Concealer is one of my favorite Old Guard makeup products, used as a concealer anywhere on my face.  No need to use powder over it.  I order this from the Lancome site or Ulta sites, since it is no longer available on the Sephora site.  🙄

I will try to get a sample of the Lancome Idole EDP.  I like florals, so this might be good for me. Thanks for mentioning this fragrance!

@tsavorite Did you see Lancôme is 20% off today and tomorrow? Perfect time to pick up Idole!

Thank you, @alexasteph !  The mini Idole is already sold out and I haven't tried the scent yet.

@tsavorite It’s really lovely, super feminine! It’s a really creamy floral, not too sweet, but comforting and inviting. I’ve gotten compliments the last few times I’ve worn it, more than any other fragrance I have!

This is such a fun idea, @alexasteph!  You really made me think.  I realized that I've been using the Lancôme Monsieur Big Volumizing Mascara Standard Size Black - 0.33 oz/ 10 mL foreeeever and it's still pretty much my favorite.  I try other mascaras, I nearly always go back.  I also still love the Anastasia Beverly Hills Strong Hold Clear Brow Gel Clear even though I know that a lot of people are over the "crunchy brow" trend, lol.  Sunday Riley Good Genes All-In-One AHA Lactic Acid Treatment is also something that's always in rotation and I know that there are plenty of "dupes" out there but I love Good Genes so much that I keep buying it anyway.

Thanks for sharing YOUR tried-and-true products!

@CookieGirl1 Good Genes is a recent addition to my routine and I love it!

@alexasteph it's one of the few "instant gratification" skincare items that I've found.

@alexasteph  I tried hard to think in terms of the longest-used favorites I own, not just my absolute favorites… I mean, some of my absolute faves are recent releases or simply not as old as others I have. But I still wound up listing more lip products than I meant to (surprise surprise). 😂 🤦‍♀️ 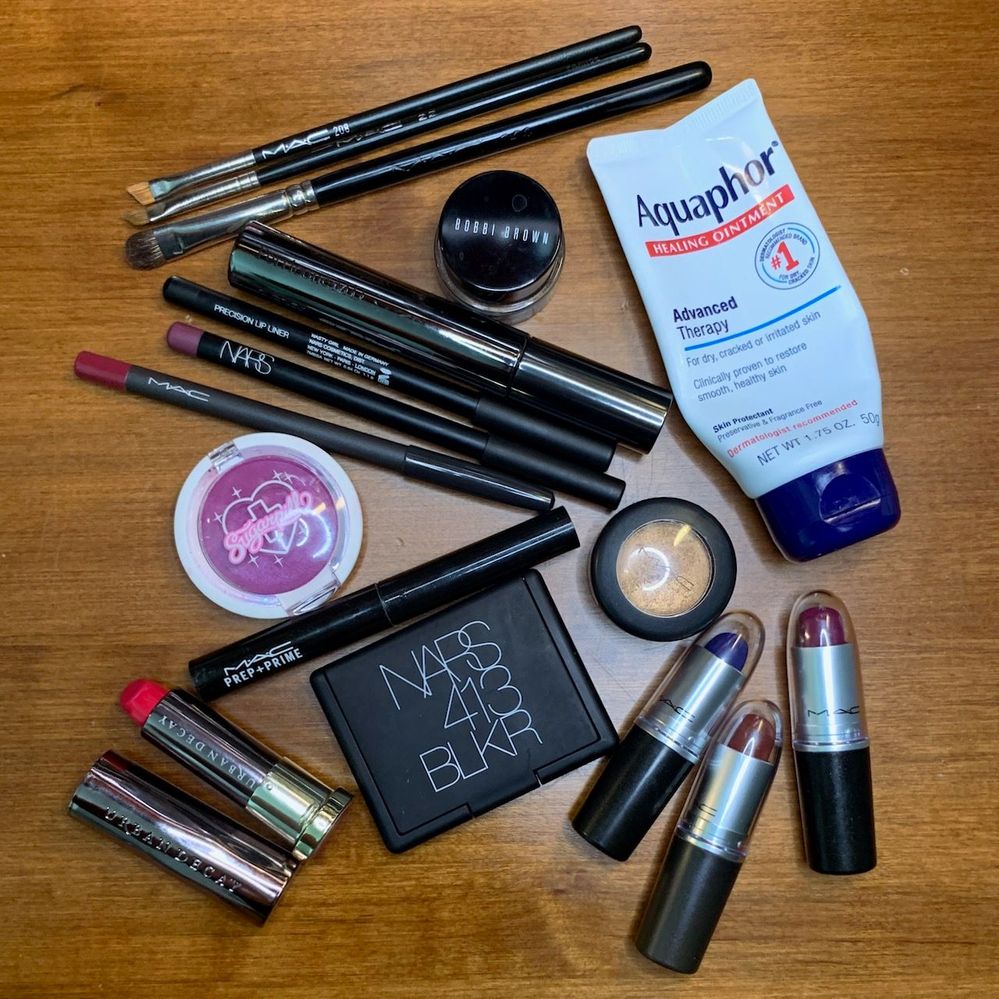 This photo makes me realize how many faves are discontinued... sigh.
Lips: lipstick is the first makeup item I ever loved, and it's still my absolute favorite. My love of lipstick began with Revlon in the 1980s, but I can’t recall the last time I used a Revlon bullet. In 1990, I “graduated" to MAC lipstick and the rest is history.
Brushes: in the early 1990s, I bought some MAC natural hair eyeshadow brushes. Of those, I still have and use my old 144 shader, 22 angled, and 208 brow. The 144 will forever be a favorite brush; its replacement, the 239S, is fine but not as good. I’ve used that 144 so much in the last 30 years, all the silver lettering’s worn off the handle. [ EDIT: thinking back, that 208's not as old as the 22 and 144. I think I bought the 208 in the 2000s, so it's at most 21-22 years old vs. the 30-32 year old 144 and 22. I wish I still had my original natural hair 217 blender, which performed better than its synthetic replacement. ]
Eyes: I'm excluding palettes because I've decluttered all my oldest ones.
Blush: I didn’t use any until NARS Blush won me over, and that wasn’t too long ago… around 5 years ago, I think. The first NARS blush shade I ever bought was either Outlaw or 413 BLKR, and now they’re both discontinued.
Skincare: Aquaphor Ointment for the win. It’s my daily lip balm, occasional “eye cream,” skin protector in frigid Chicago winters (keeps me from getting windburned cheeks and super dry chapped skin), wound barrier, and I even use it to custom-blend lip shades.
Other than Aquaphor, it’s hard to name any favorite skincare products I’ve used for a long time because I’ve tried and stopped using so many. Eh, I could’ve included Origins Clear Improvement® Active Charcoal Mask to Clear Pores 2.5 oz/ 75 mL in my photo: that’s the only Origins skincare product I still use, and it’s dang effective.
NARS Precision Lip Liner

@WinglessOne Nars Orgasm was my first high-end blush. In retrospect not the best shade for me, but the formula is a hit almost every time.

@makeitup305  NARS still makes my favorite powder blush formula. They apply beautifully, blend easily, and last all day. Sometimes the palette blushes aren't up to par with the singles, but I even love the blush palettes I own. I just wish NARS would stop discontinuing my favorite shades.

I always laugh when NARS claims Orgasm is a universal shade. Not sure they still make that claim since launching Orgasm X, a sign that they finally realize Orgasm's useless on some (especially deeper) skin tones—which is also funny because NARS is known for inclusivity in general. Or I should say, Francois Nars is known for that. Anyway, it's a good thing NARS has so many other shades to choose from, all skin tones are bound to find at least one that works.

@WinglessOne the tone and the sheen I just don't find very flattering on me, even if the depth works. Every time they have a palette come out I have to talk myself out of buying it. I think the Wanted blush palettes were some of the best quality wise (that weren't baked gelee formula). I usually have good luck with NARS overall. Even if their stuff can get repetitive, the quality is more consistent than most brands, imo.

@WinglessOne Thanks for sharing! Does the MAC Prep & Prime also help extend your lipstick’s wear time/keep lipstick from smudging onto things so much, or does it mainly keep the lipstick from feathering around lip lines?

17 Replies
Conversation Stats
Photos3
Are you sure you want to uncurate this?
Cancel OK
testing