Start a Conversation
Add a Photo
Turn on suggestions
Auto-suggest helps you quickly narrow down your search results by suggesting possible matches as you type.
Showing results for
Search instead for
Did you mean:
Post in Skincare Aware
Posted 10-25-2016 | Updated 04-27-2017
DiVWA

Does anyone know if Sunday Riley has discontinued its Bionic cream? It's no longer showing on Sephora website or at most other websites. 😞 This is the first anti-aging type cream with bells and whistles that I've been able to use without any reactions.

Can a mod pipe in and confirm?

Thank you for the updates @Alicehoopz and @twingrandma and @prti. I've not had time to keep up with the lawsuit and the company's plans about Bionic so appreciate your updating to this thread.

this lawsuit was dismissed

I feel like we live in a day and age where the default reaction to not getting what we want is to sue. which, I don't know, maybe it's just me but...that's stinking weird. what if ALL skincare was pulled? because that's the point of skincare lol. and it's up to the customer to determine if it's effective enough to buy imo

anyway glad it was dropped.

The class-action complaint, which was filed in early December of last year, according to legal news site Law 360, centers around Bionic, an anti-aging cream made with aloe-leaf extract, prickly-pear extract, and copper. The suit, filed by two women who purchased the cream for $125 for 1.7 ounces, alleges that they were “duped into paying an exorbitant price for the product, as if it were an effective drug."

"Like a modern-day snake oil salesman, Sunday Riley … preys on consumers' fundamental fear of aging by marketing the [cream] as if it were an FDA-approved drug that could change the physical structure and function of skin itself," the plaintiffs, Helena Armstrong and Lynn Moore, state in the suit, which Racked was the first to resurface in 2017.

In the suit, the plaintiffs cite examples of the brand's alleged "misleading claims" with photographs of its products' descriptions and ingredient labels, including "combatting [sic] every anti-aging concern and cause of aging," "prevent + reverse the effects of aging," and "help to extend the lifespan of your skin."

We've been in touch with Sunday Riley for comment, but the company has issued no formal statement. We've also reached out to Lee Litigation Group, the law firm representing the plaintiffs, but at the time of publication we had not heard back. We will update this post as more information becomes available.

Here are some updates for Sunday Riley...

- Bionic is NOT discontinued.

- Blue Moon and Flora may be discontinued. They are being sold in limited quantities. 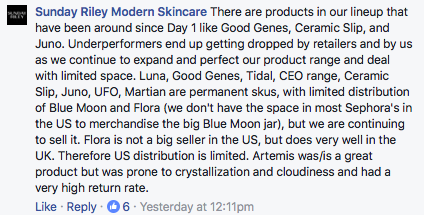 Thank you thank you prti!! Bionic is the only product I've repurchased 6+ times, and I've been obsessively and frantically checking the internet for updates on my fave product everyday for months and months!! So happy!

Thanks for sharing prti!  This is super helpful.

What else can you use that is similar to Bionic? Does anyone has any suggestions?anyone

@MultisHoegal, a good friend of mine (you know who you are) suggested Odacite Oleasomes Time Release Delivery Cream as a similar product. It doesn't have the same ingredients but has similar consistency (although not as sticky when put on--it's a bit thinner). So far I like it a lot and am using it instead of the half bottle or SR Bionic I have remaining.

Another product that is a bit thicker but feels pretty good is Drunk Elephant Lala Retro Whipped Cream. But this one doesn't seem to have anti-aging type ingredients as the Odacite time release cream does.

The Odacite site gives free samples of three products so you could get a sample of the time release cream that way. They do require paying for shipping though sometimes the shipping is free too.

There was a post from BritishBeautyBlogger that there is class action lawsuit against SR for making inappropriate (prescription drug-like) claims about the efficacy of Bionic. Her take was that they are being made an example for claims that couldn't possibly be true. I am assuming that was why it was pulled from the market.

I believe the Luna Oil is under the gun also for getting its blue coloring from food coloring, instead of from blue tansy as promoted.

Oh no!   Luna + Good Genes have made such a difference in my skin since I started using this combo several months ago!  I seriously hope Luna Oil doesn't become discontinued.  I personally don't care if it contains some blue food coloring.

And for the sake of the ladies whi have had good results from Bionic, I hope it isn't discontinued, either.  Once you find your hg products, it is so hard to give them up! 😥

I'll just give my two cents here. I got far better results from Luna than from any prescription retinoid I tried before. And it was surprise too, since I was just trying a sample. So if it has food coloring or not it doesn't bother me. Food coloring is so safe you can eat it, and it's only used here to saturate the color of the oil, so you can see when it's all absorbed by the skin. The blue tansy color alone wouldn't have as much contrast against the skin.

I never used Bionic, so I can't give an opinion on their claims as @lipstick4soul mentioned, but I can say that Luna + Good Genes was a total game changer for me (someone who visits a dermatologist frequently). I see the big brands making ridiculous claims all the time, not to mention the blatant false advertisements, and never heard of them being sued. It bothers me they chose SR to "make an example" of, instead of going after the real offenders.

I heard the blue coloring was added to make it really clear that this is not a product to be worn during the day, when you would get sun exposure. I was annoyed by the coloring at first but when I heard that explanation I was like, "oh yeah, people are really lazy about reading/following directions so that's kind of a brilliant strategy."

The blue tansy/blue color thing always sounded like random bs eyeroll-y marketing to me, but I don't remember if it came from SR directly or if it was from stores/sites trying to tie it into a bigger "natural" ingredients campaign. It's harder to build hype on effective ingredients that sound too "chemical"-y, so it's hard for me to blame companies/stores when they focus on gimmicky ingredients instead of proven ingredients.

Actually, blue tansy essential oil is actually that color and smells like that. I was a bit shocked when I found out it had added blue color because I thought the marketing and overall image of the product implied it was that color from the tansy. 😒 it totally lowered my estimation of SR in general.

@lipstick4soul  It does have that particular scent.  At least we know it's in there!

I never liked that they added blue coloring. I don't need it on my face, that's for sure.

oh no!  I really enjoy the Luna oil, so that makes me kind of sad to hear!

i like it too, but I would be happy if they didn't make it blue just for the look!

@Ispend2much6,  I think you would be interested in this whole discussion.  🙂

Thank you @tsavorite- you are correct!

3
Reply
43 Replies
Conversation Stats
Photos2
Are you sure you want to uncurate this?
Cancel OK
testing