Start a Conversation
Add a Photo
Turn on suggestions
Auto-suggest helps you quickly narrow down your search results by suggesting possible matches as you type.
Showing results for
Search instead for
Did you mean:
Post in Trending at Sephora
Posted 04-18-2011 | Updated 08-13-2019

I get the feeling that 70% of the reviews on Sephora.com are fake-- posted by the product distrubutor. I always click on the user and see if they've reviewed other items or not.. I mean, almost every product has at least 4 stars total. That seems a little unlikely. It bothers me.... Luckily they have a great return policy so you can try things out yourself. Thoughts?

Wasn't there a scandal where some beauty brand would make their employees write at least one review as a part of their job? It was a pretty big brand with a lot of products which was why I was so disappointed. Not surprised however.
1
Reply
1 Reply 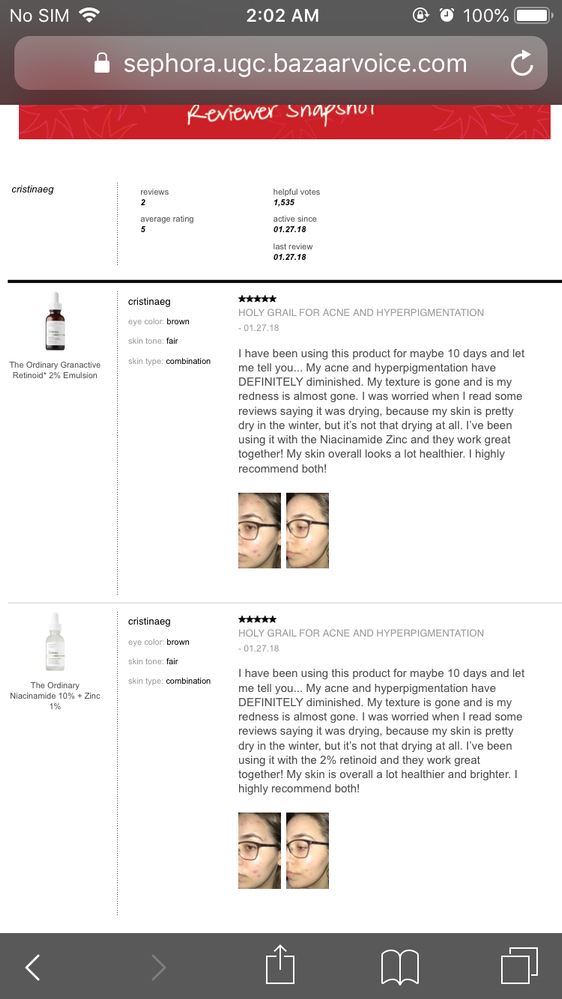 I feel like it makes sense that the reviewer posted the same thing twice, because she used the products together and referenced the other product in her reviews.

@01Mooncake  Just wondering: how can you tell it’s fake? Is it because the person posted nearly identical reviews of two products?

If so, you’ll probably think I’m a fake reviewer, too. I posted nearly identical reviews of Drybar On The Rocks Shampoo and Drybar On The Rocks Conditioner, because I used them together and both were great, but they were listed as separate products. I wanted to get the word out about both, but I didn’t feel it was necessary to write entirely different reviews.

I can assure you that I’m not a fake reviewer, though 😊

@PinkEvergreen I’m sure yours aren’t fake. I work in this industry and I know people who work directly for a lot of these companies, they don’t even bother to change their user names so it’s very easy for someone like me to pick out the reviews that are biased and really shouldn’t be there per Sephora’s ‘Sunday Riley Scandal’ new rules. Understandably, Sephora isn’t going to know who these people are, or maybe they do, I don’t know.

This happened with the new Herbivore Prism serum. I get Herbivore emails so, when I got the announcement email about Prism, I went to the Sephora website to see how much it was & possibly purchase it. I was surprised to see that there were already like 10 reviews. They were mostly glowing reviews about how it had "changed my skin", "best serum ever", etc. Curious, since it literally had just been released within the last hour. BUT there were also 2 reviews where the reviewer pointed out that it was weird to have so many good reviews so quickly (even if people got samples, how did it "change their skin" that fast) AND that most of those reviewers had never reviewed another product. Fast forward to almost a month later (it was released July 2), there are *still* only 20 reviews and ALL OF THEM are 4 or 5 star except 1. Which means- 10 people reviewed the product within an hour of its launch, only 10 more people have reviewed it since (strange for something so effective), and Sephora definitely deleted the questioning reviews. I get it, the review section is not a place to question the integrity of reviews (or is it..?) however, that is a clear case of fake or altered reviews that I actually saw first-hand. To the people who posted questioning the fake reviews- THANK YOU. I like being able to see shadiness for myself. I always assumed but, now I know.

I agree, I got a sample of the adaptogen deep moisture cream and was thinking about getting the full size. Almost all the creams released 1-3 years ago have no more than 4 stars, but this one suddenly had five, released about a month ago. All the profiles ended in numbers, and have only reviewed 1 product. Obviously they're fake. This was was more obvious than they usually are, anything with the "clean at sephora" mark usually has more fake reviews than usual I've noticed. They're obviously a big money-making company, why not verify a purchase before posting a review? Its not going to affect their sales..

Yes, I definitely think this is completely true. They all have high ratings. And I’ve been trying to post reviews on products that I rate one star, and they NEVER let me. It always says they can’t post it. They for sure are picking and choosing what reviews they want posted.

I gave up on rating products on store websites and just rate them over on Influenster instead. Haven't seen them delete a review and the reviews count toward the possibility of getting into campaigns.

I just came upon this topic.  I actually got really annoyed by this because my review was continually being deleted over and over again.  I finally had enough and made a video about it.

I am a VIB Rouge and my reviews do not go through, not even 5 star ones. I am very disappointed by this!

@xhayzee, I'm sorry to hear this. I'll look into this and send you a PM!

Thanks, I look forward to hearing from you!

It's almost arrogant of them thinking we are so dumb that we'll believe the ratings and not do our due diligence before purchasing a product.  Very upsetting.

Put the thanks in wrong spot lol but it is very frustrating!

Thanks, I look forward to hearing back from you!

Sarah - I somewhat agree because if not all reviews are posted the product is not getting a well rounded review!! Almost everything I got from Sephora was amazing! However, there was a product or two I was slightly disappointed with and I feel other people could use my opinion in deciding to buy. I nearly always read reviews to make a decision.

I know I've struggled to get a few reviews through - although to be fair, one was 4*. The others were 2-3*. I save my reviews and will continue editing/resubmitting until they go through (this is a bit of a sticking point for me: I get really irritated when sites seem like they might be impacting the review system so I'll take the time to make sure mine can go through). I didn't actually know people had problems with reviews being removed.. I don't think any of mine have to date, but apparently I'll have to keep an eye on that.

That said, I know that I typically leave higher reviews purely for the fact that I don't buy that much, and when I do I've done as much research as I can which means I'm rarely dissatisfied with a product, with a few exceptions.

Yes, I'm quite sure a lot are fake as peeps have said.  I also believe that Sephora will remove some negative reviews.

I order reviews from low to high stars.  Then I look for trends in the negative reviews.  If there are any multiple occurrences of something, for example,"too oily," "keeps slipping," or "doesn't last," I figure those are a consistent complaint and I need to determine from there if I will buy it or not.

I don't like reviews where, for example, they say, "it makes me break out," and other comments that are so individualized. It's useless for other people for whom the product would not cause them to break out.  If that person who made the break out comment stated their observations of the color, smell, texture, lasting power, etc., in addition to it, I actually rate that review as useful.

With positive reviews, I actually look for detailed observations, tips and other useful pieces of advice.  Those are the reviews that I believe more than just a general thumbs up.

I exclusively read Rouge reviews and also order from low to high reviews. That being said, I do my own research and don't really rely on Sephora reviews. Most people probably aren't as interested or willing to but in that amount of time into researching products, so I guess the fake reviews work in the aggregate.