Start a Conversation
Add a Photo
Turn on suggestions
Auto-suggest helps you quickly narrow down your search results by suggesting possible matches as you type.
Showing results for
Search instead for
Did you mean:
Post in Trending at Sephora
Posted 10-06-2021 | Updated 01-25-2022

We’re starting this thread for you guys to report any issues and weird things that you are seeing or ask any questions. We have a number of issues logged that we are already working on a fix for, so this is a work in process.

Some things to note as you are reporting issues:

It’s good to see you all and thanks for being patient!

Whenever reporting a bug we need as much info as possible or our tech team cannot reproduce the issue and verify it's actually occurring. If they can't see the issue they cannot fix it. You cannot overshare details, test on too many devices or share too many screenshots... The more detail the better!

@TeamBIC I am using Google Chrome.  I know I am not the only one who is having this issue as @BaseballJen mentioned it too.

Helloooo, @SportyGirly125 and @BaseballJen! Thank you both for your patience on this. Our vendor has started looking into this issue, but haven't yet been able to recreate the error on their mobile web browsers. Are you still not seeing any popups after clicking the camera icon in the text editor? We'd love to know if you're seeing anything different!

@TeamBIC I noticed last week sometimes it works and sometimes it doesn't.  This week I didn't notice any issues yet.

@SportyGirly125 That's GREAT to hear! Hopefully the photo uploader continues to work for you (and @BaseballJen) 🤞

Our vendor partners mentioned that it's possible that the "Reply to Post" page might struggle to display the photo uploader if the page has not fully loaded... just something to keep in mind in case the issue comes up again in the future! And please feel free to let us know if it does 🙂

@TeamBIC I appreciate the new messaging format. The problem I have with it is that when I reply back the reply button is so far down by the bottom menu that it doesn’t allow me to hit the reply button. The menu covers that area. This happens on mobile and on the App and is really annoying. The only way to respond back is to start a new message to the person.

Thank you for bringing this to attention, @SportyGirly125 - I just noticed this yesterday and didn’t make it to my computer to check it out there as well, although it seems like it might just affect mobile users.

Thanks so much for flagging this to us! We see what you mean on our mobile web browsers, and are working with our vendor partners now on a solve.

Would you be able to provide a little more detail about the experience you're seeing on the Sephora app? We'd love to understand any issues that are surfacing in the app design - a screenshot might be helpful for us to pass along to our partners!

@TeamBIC I think the only issue is the bottom menu screen getting in the way on mobile when replying back.  This only happens if the message is longer than a couple of words.  No issues on the app since I tried it today.

Appreciate the clarification, @SportyGirly125! We saw the same experience, and wanted to give you an update that a fix to this "Reply" button issue on mobile browsers will be going live next Wednesday, 10/20. Thanks again for bringing this to our attention! ❤️

@TeamBIC Yay. Thank you for the update!

Someone broke the feed on the mobile site (mobile, chrome, Android). I sat down at my desk so I could get more threads in one shot, and the full site on my desktop is just fine and dandy (chrome, windows). I'm unsure if the app is affected as I don't I have it.

Instead of showing the most recent reply to a thread, the mobile site is now showing the original first post of whatever thread is at the top of that page, and if I click "read more", I am directed to the original post of that first thread. When I took these shots, Empties V2 was the first thread on the first page, but that'll change as soon as someone else bumps another thread to the top. A few pics:

^First thread on the first page of the feed 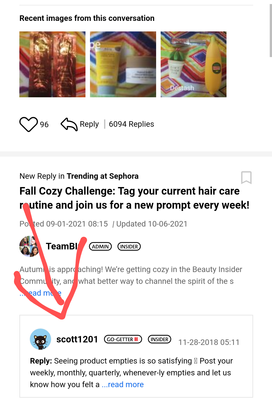 ^Second thread on the first page of the feed 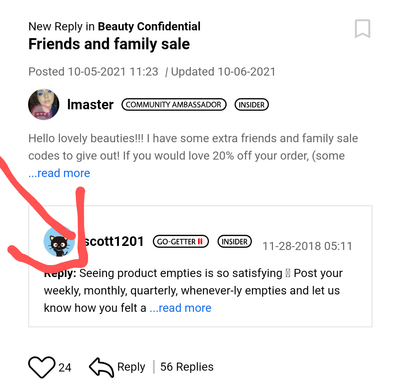 ^and the third thread from the first page of the feed

When I go to page two of the feed, the same thing happens, but this time it's using the original text from the first post on the second page, and so on and so forth for seemingly every single page of the feed.

ETA: aaaaand as soon as I posted, it seems to be fixed. Leaving this post up anyways, as it's a weird anomaly 🤔

Hi friends! Thanks for pointing out this glitch where incorrect posts are being pulled into the post preview boxes on the Community homepage feed. To give you some background, our vendor partners have been helping us make routine, behind-the-scenes optimizations to the Community forum to help improve performance, and it seems the latest update inadvertently caused this bug ... whoops!

Yesterday our partners reverted the optimization changes which brought the homepage feed back to normal. We'll be continuously trying to re-launch the updates without causing the feed glitch again, and appreciate your patience as we work to get the BIC in tip-top shape! 🙏

(P.S. Glad some of you noticed the newly upgraded private message inbox! Thankfully, that update wasn't what caused the feed issues - we're happy we get to keep it in place. ❤️)

@TeamBIC hello - I just wanted to report this original post glitch is happening again for me this morning.  I’m on the mobile site on Apple !

@RGbrown this happened to me too!! Last night around midnight PST. It was so weird!! But it appears to be fixed. Since weird bug with an update?

Edit: Sometimes what is described above is happening and sometimes it is the most recent "parent" reply that shows up. It's been very glitchy.

@RGbrown @This has been happening to me all day on and off as well! So strange!

@RGbrown I noticed the same thing earlier today and thought it was very odd too. The format of my PM inbox on mobile feels like it’s been upgraded so I assumed the issue with the site replies could be related to this change?

Ahhh, I'm glad I'm not the only one that saw it. So weird! Hopefully it doesn't come back again.

Whoa, yeah, the PM box is way different, I hadn't seen that yet. Definitely could have been a side effect of the update!

@RGbrown you're definitely not the only one. I had a similar thing happen, just with a different thread. I'm also using chrome on Android.

@SportyGirly125  Good job!  I noticed that the pictures she used in the makeup swatches/looks didn't look like the avatar picture, but thought, "Who knows makeup can really change a person's appearance!"  The spamming was a clue though.

8 Replies
Conversation Stats
Photos168
Are you sure you want to uncurate this?
Cancel OK
testing