Start a Conversation
Add a Photo
Turn on suggestions
Auto-suggest helps you quickly narrow down your search results by suggesting possible matches as you type.
Showing results for
Search instead for
Did you mean:
Post in Skincare Aware
Posted 09-26-2021 | Updated yesterday

Open for input and suggestions👇🏼

We love hearing about every masking experience, and suggestions are always welcome.

This Week’s Theme: 👻 Spook-tacular Masks! Bats, ghosts, and all other scary skin treats🦇

Letter of the Week:  R 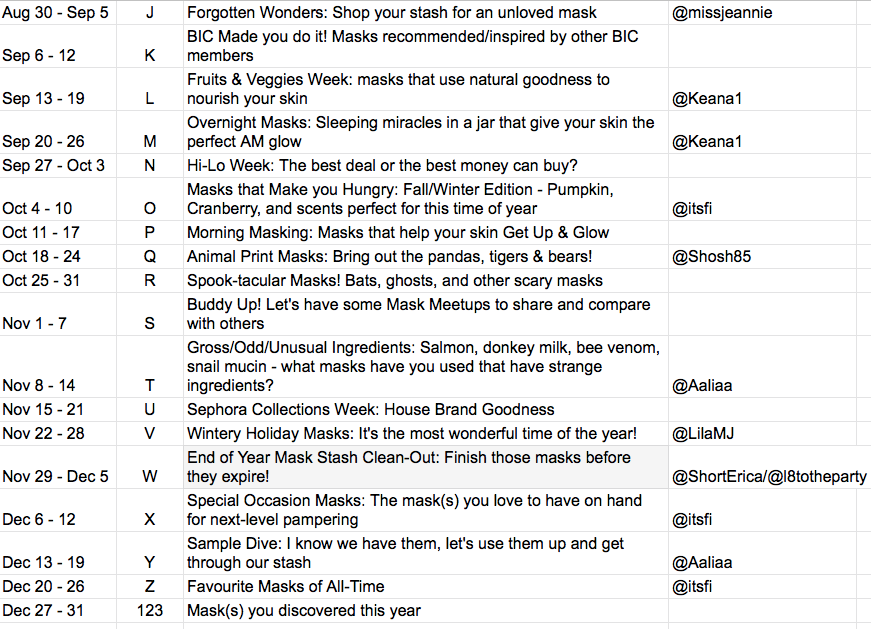 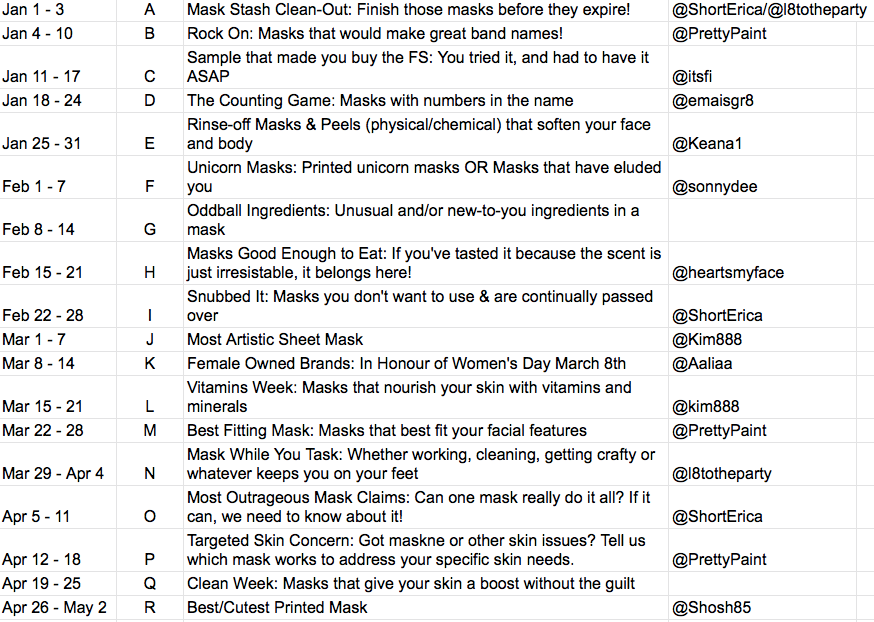 Thank you @Aaliaa for starting this thread, and giving us a place to share our love for masks💗

Another PSA: the packaging on these are adorable! These make great gifts / stocking stuffers! 🎁 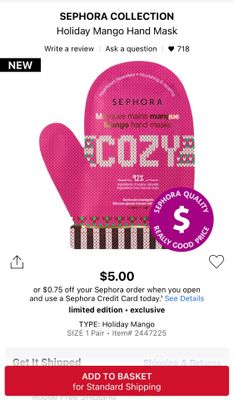 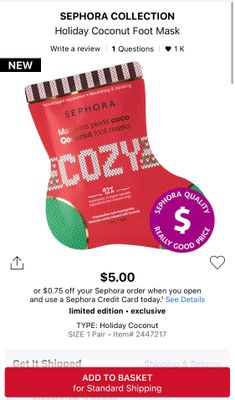 The packaging on these are cute. I can see how they'd make great gifts; will have to pick some up.

@elleb810, Sephora always does an excellent job on the packaging for the holiday releases of these masks. This year’s design is exceptionally adorable! 😍 So cute you could skip the wrapping paper! 😉

Thank you for these VIP PSA’s, @itsfi! The packaging this year is pretty adorable.

@eshoe, Sephora always does a great job with the holiday packaging on these masks.

@itsfi  The packaging on these holiday ones are always so cute!

@Shosh85, Sephora does a good job with their holiday packaging for their hand and foot masks. There's a part of me that would like to see some limited edition scents / "flavors" on these holiday masks. The big draw for them for me is really the packaging though, as I think there are other similar masks out there that perform comparably or better.

@itsfi - how cute! Great idea for gifts or stocking stuffers.

@eshores, very cute, right?! Sephora always does a great job with the holiday packaging for their hand and foot masks. These have been hits as gifts in years past; I'll pick up a few again this year to gift.

PSA: Just noticed that Sephora Collection has come out with a new limited edition sheet mask for the holidays. 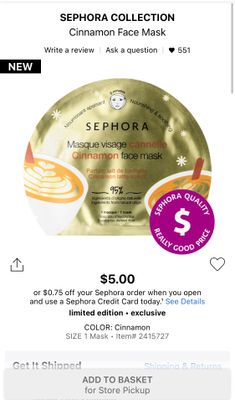 Not sure whether I’ll pick this up; probably won’t do so immediately, but that others here may be interested.
SEPHORA COLLECTION Cinnamon Face Mask Cinnamon

There’s a hand balm in the same scent available too.

@itsfi  I do love cinnamon but not sure I want it on my face. I’m curious about the scent tho!!

Same @ather, same!! I feel like all the maskers here are feeling the same way about this cinnamon mask. I plan to wait until these products are available in store. I'll go in then to do a smell test of the hand cream. We'll see from there how adventurous I am feeling about cinnamon on my face.

@itsfi  I'd be curious to know how this one smells! Not sure I'd purchase this one either. Just like the other SC masks, this one has fragrance high on the list and the star ingredient is low - but I'm not so sure I'd like a lot of cinnamon on my face anyway

@Shosh85, yeah. I'm not so sure about cinnamon on my face either, but like you, I'm curious about the scent on it (even though having added fragrance that high up on the INCI list, or just having it at all, seems odd. Have to share that when I first saw the reference to "cinnamon," my brain associated it with being a cinnamon roll mask - associated the scent of it being akin to a cinnamon roll because I know that "cinnamon roll" is not a skincare ingredient ... or, not yet, at least! Hahaha! What do you think? It could be a superfood, right? 😂🤣😂

Also, looking at the illustrations, I actually thought it might be a spiced latte or cappuccino. I was a little bummed when I realized it was neither. 🙁

I'm debating whether to pick this one up; currently leaning on not, but my curiosity may get the better of me. I'm inclined to wait until there's a good sale, maybe post-holidays?

M for Marshmallow, Meience and an Overnight Mask: 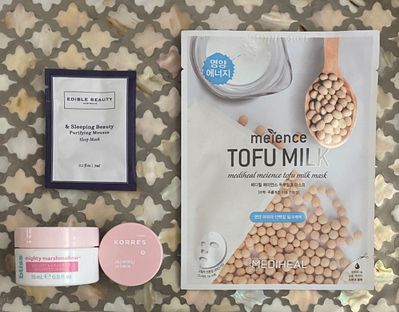 Spoiler
The Bliss Mighty Marshmallow mask is about as unobtrusive as it gets; slight ashy scent (similar to CT’s Goddess Mask), smooth application and easy wash-off. This is a repurchase, but I doubt I will go for a third jar. The Korres Lip Butter in Jasmine (with a cake batter-type scent) is one I always have on hand. This feels similar to room-temp butter and has a soft ballet-pink opaque wash of color. This was my go-to prior to discovering Laneige lip masks, and I still like to have a jar or two on hand of this at all times.

The Mediheal Meience Tofu Milk has a clean, fresh scent and a decent fit. It is slightly oversize, but no snipping was necessary. The mask material is a “OEKO-TEX Class 1-certified, triple layer, embossed bamboo sheet,” according to the brand’s site, and it is indeed very comfy. The serum is a milky cream that feels gentle and soothing on the skin. After about 30 minutes, I removed and let my skin absorbs the remaining goodness. After about 15 minutes, my skin still felt pretty sticky, which used to be a bit of a dealbreaker for me, but I’ve come to terms with tack and now we are friends 🙂 I would 100% repurchase this one.

Finally,  the Edible Beauty & Sleeping Beauty Purifying Mousse. I found this little gem in the MOTM box, and a big thank you to whomever placed it there! This pale pink, airy mask has Australian Pink Clay and Zeolite (has vitamin A & C, claiming to illuminate & brighten). I pondered whether or not this would be too drying for my normal skin, but instead found it imparting a softened, almost blurred appearance. It reminded me in performance to the Alpyn Calming Midnight Mask. I snuck three uses out of this little packet, and never once found my skin dry or tight in the morning. A love and going on my wish list! Thank you @keana1 for this week’s challenge, I loved it as did my skin:) 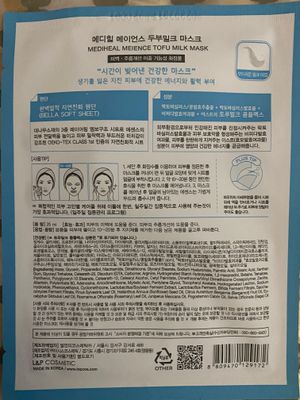 @missy94612 the FS is on my to-do list, for sometime soon. I initially planned to pick it up for the F&F sale, but was side-tracked by the candle set!

@eshoe  All these sound lovely! I am glad you and tack have become friends. It’s always great to hear when you are able to move past your differences!!

Ha ha, it’s about time, @ather. I have always wondered if a point would come where I ceded to the tack, and it has arrived. I no longer fear the mask removal 😉

The Korres lip butters are so smooth and nice.

Which is your favorite, @elleb810? I was so surprised to find they don’t typically have scents related to their names!