Start a Conversation
Add a Photo
Turn on suggestions
Auto-suggest helps you quickly narrow down your search results by suggesting possible matches as you type.
Showing results for
Search instead for
Did you mean:
Post in Nailed It
Posted 10-31-2017 | Updated 5 hours ago

@Shosh85  I agree. I think I could do my left hand but my right might be tricky!

Wow @ather ! That’s stunning! 😵😵😍😍 And it is pure winter, so icy looking! It is true that a few snowflakes ❄️ would make it look so pretty! 😃 I have a snowflake stamping plate that I want to try, but who knows if I will be able to make it work! 😅😅😅 I already started my stamping journey and it was a hit or miss (with few hits an a bunch of misses 🙈) But it’s so much fun!

@Saradestin  Oooo stamping looks so much fun. I haven’t taken the plunge yet. Doesn’t mean I won’t lol. I’m looking into the magnetic polishes right now!! Can’t wait to see what you do!!

Gorgeous mani, @ather , and it looks great with your silver ring! 🤩

@Titian06  Thank you!  Everything needs to match!!!

This is flipping fantastic! 🤍✨ Bless you and your patience with chrome powders 😅

@RGbrown  I think it’s less patience and more I am stubborn. I spent the money on it I will make it work. Lol. I’m pretty stubborn like that. I was just at a winners and I saw an opi chrome effects no wipe top coat. But it didn’t say gel on it. I assumed it was regular polish I kinda wish I grabbed it but I figured I would just continue the way I’m doing it.

This one? 👀 It works well if you want to try doing it with regular polish, but honestly, I think gel is the easier route with powders. I never pull mine out because I don't have a gel setup, and it's just so fussy to mess with 😕 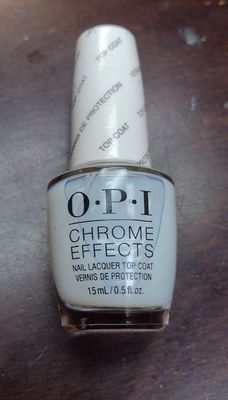 @RGbrown  Nope. It was different. I bet it’s the gel version maybe? 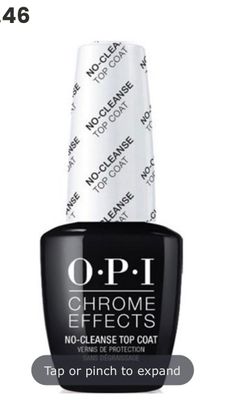 It was this one!

Ah, yup, that's the gel version! I had it too (I found a set at Burke's with the one I posted, plus this one, and two of their powders), but when I went to play with it, it was cured solid in the bottle somehow, and I wound up breaking the brush stem out of the top trying to get it open 🤣 AFAIK, it's just a no-wipe topcoat, which you've already got under control!

@RGbrown  Ahhh ok I figured as much. Cool to see. I normally don’t see gel at winners.

I found a 6pk of an OPI red gel at TJM the other day 🤔 And have seen the occasional bottle of other colors here and there, but it's rare, and normally only 1 or 2 at a time.

@RGbrown  Oh wow. Crazy. I’m an hour from any of those stores so I don’t go often. But I’ll have to start looking when I’m close to one.

@itsfi  Thanks! If only I could do some snowflakes on my nails they would be perfect!

Oooh, snowflakes on this mani would be  would be so fun @ather! ❄️ I have snowflakes on my list for nail art but that’ll be for another day, when I have more time and patience.

@itsfi  maybe I can try it when I am on my Christmas break and have more patience!

In case you can't find better deals on China Glaze polishes at other retailers this month: 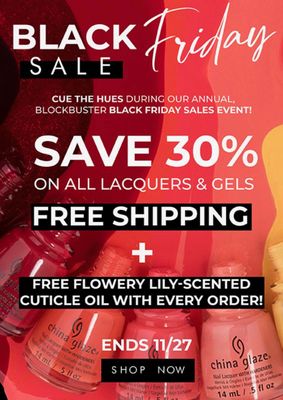 "Black Friday 30% Off On All Nail Lacquers & Gels PLUS Free Flowery Lily-scented Cuticle Oil AND FREE Shipping" offer valid online only on chinaglaze[dot]com, ezflow[dot]com, supernailprofessional[dot]com, and ibdbeauty[dot]com through 11:59 P.M. PST on November 27th, 2022. No code required to redeem offer: discount automatically taken at checkout. Valid on orders shipping within the U.S. Taxes, shipping and handling fees are excluded from any discount. Cannot be combined with some coupons and offers. All items marked "final sale" cannot be returned or exchanged. Merchandise purchased online is not returnable in any of our retail or specialty store partners. China Glaze, EZFlow, Super Nail Professional, and IBD Beauty reserve the right to modify or cancel this promotion at any time without notice.

Receive free standard shipping with any US order through 11/27 (before taxes applied). This offer is valid for standard shipping to the first shipping address in your online order. Offer is non-transferable to any other purchases without consent from E-Commerce Support. This offer is valid only for online purchases from chinaglaze[dot]com, ezflow[dot]com, nailtek[dot]com, seche[dot]com, supernailprofessional[dot]com, and ibdbeauty[dot]com. Not valid at any partnering retail, department or specialty stores. This offer is subject to change without notice. We do not ship to APO or FPO military address, Guam, the Virgin Islands and P.O. Boxes.

Thank you so much for letting us know @WinglessOne ! Every day there is a new sale popping up! It’s quite exciting! (and almost scary 💸 😂)

@WinglessOne  Oooooo thanks for sharing!!

I received my first Mooncat order from their recent sale.

These were my choices, from left to right:

Supervillain: a multichrome flakies Lacquer filled with holographic glitterthat shifts between shades of blue and purple. 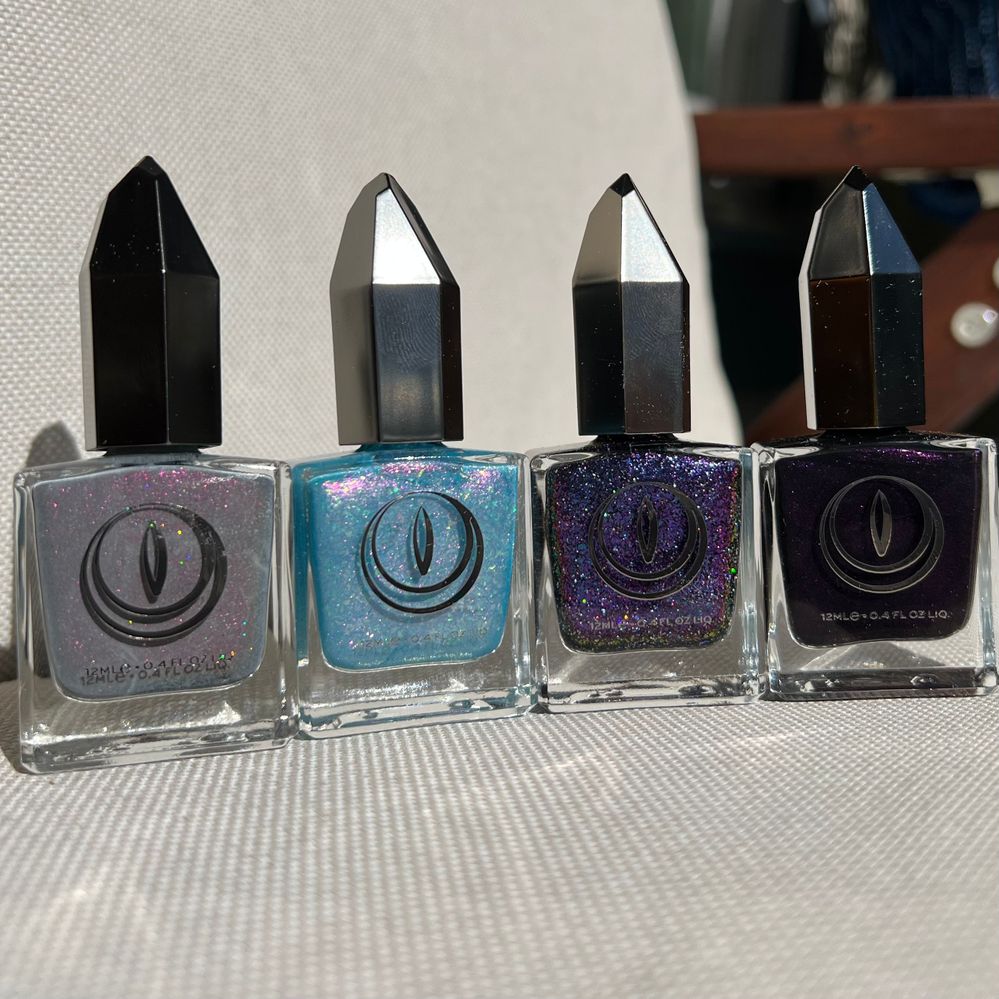 I applied the first of the polishes, Raven, the simplest of all, thinking on maybe playing with stamping later on. It was opaque after the second coat but I applied a third one.

It is a very matte formula that looks almost black in the shade (very very very dark eggplant) and has a hint of purple in the sun. Exactly what I wanted, so I am very satisfied with it and happy i got it. Now I want Dream Within a Dream and Rue Morgue 😅. I have six months to save for their next sale 😁. 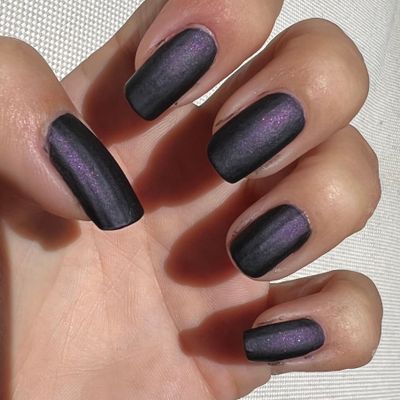 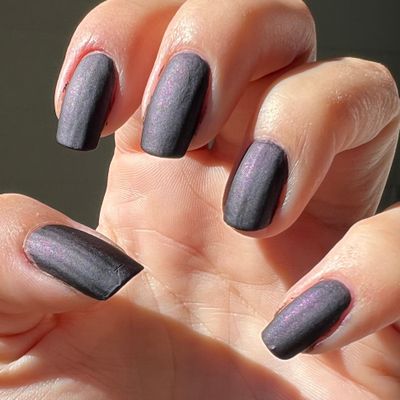 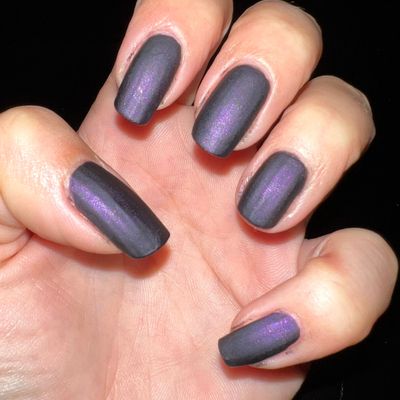 17,140 Replies
Conversation Stats
Photos3,119
Are you sure you want to uncurate this?
Cancel OK
testing