Start a Conversation
Add a Photo
Turn on suggestions
Auto-suggest helps you quickly narrow down your search results by suggesting possible matches as you type.
Showing results for
Search instead for
Did you mean:
Post in Nailed It
Posted 10-05-2022 | Updated 20m ago

Squee, congrats! I can't wait to see your results!! 🦇 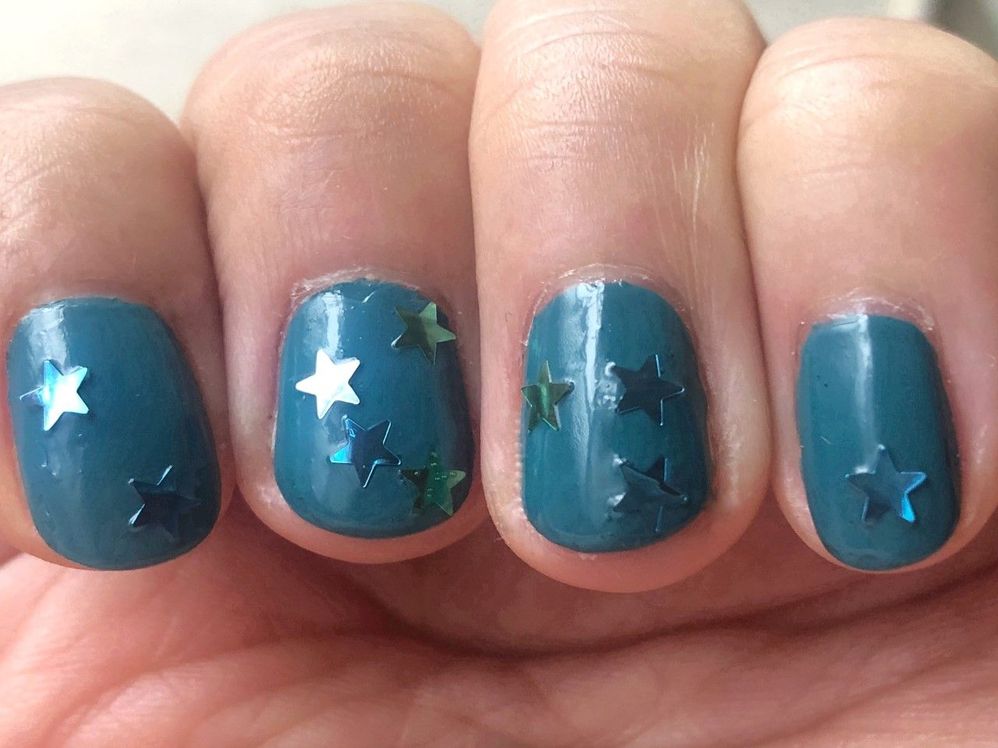 OPI Is That a Spear topped with Nails Inc Glittering Greenwich Multi-Coloured Star Topper
I picked up a handful of toppers from Nails, Inc. sometimes this year - or, at least, I *think* it was this year <gulp>, but had yet to try them. Some time late last week, I thought the deep teal shade of OPI Is That a Spear would make a great base for Nails Inc. Glittering in Greenwich Multi-Coloured Star Topper, a clear, thick-ish base with silver, green and blue stars. In the bottle, Glittering in Greenwich looks beautiful. It was a completely different story when it came to its application, wear and effect.  Where to begin?! Major difficulties getting the stars onto the nail, even on those rare instances when I was able to get a couple onto the brush itself. I ended up pouring some product into a bowl and using a pair of mini tweezers to pull out the stars and place them onto my nails. This worked out fine until I wen to apply the top coat from the polish - it was not a smooth application, not with the clear base and not with the final effect - the stars would clump together if I was not extremely careful and even then, it left a finish that was neither glossy nor matte. I even tried applying a different top coat and it did not make a difference, which I thought was very strange. Sadly, this topper is a no-go for me and I plan to re-home it (though I do feel a bad for giving someone else this topper since it's so fussy and difficult to use.
Topper, Take 2: 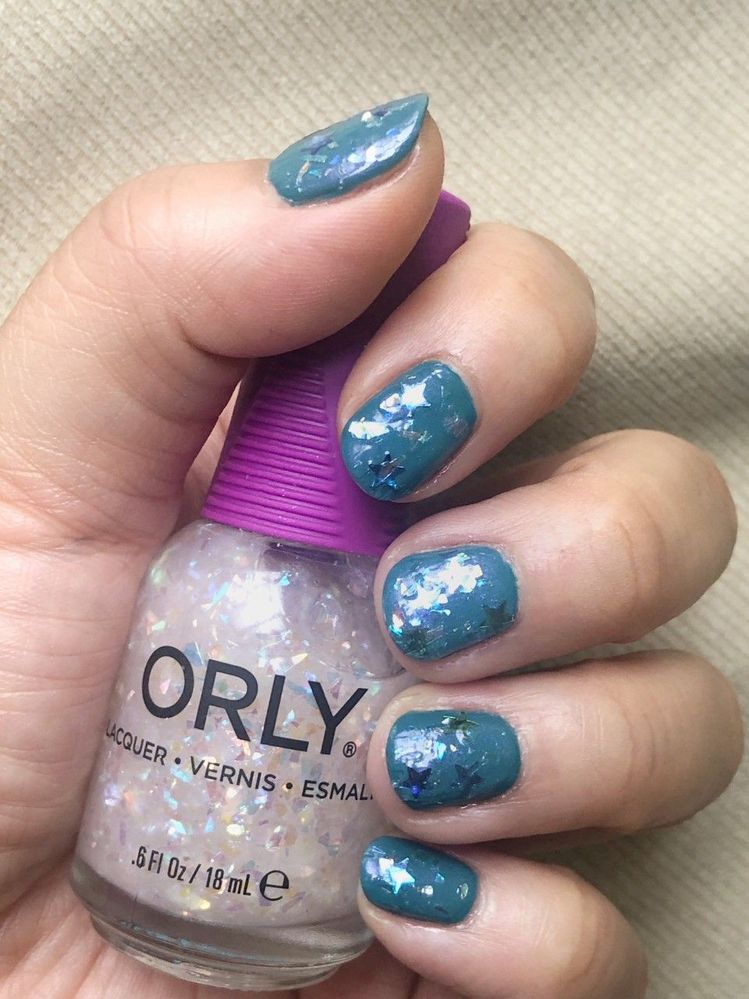 OPI Is That a Spear + Nails Inc Glittering in Greenwich Multi-Coloured Star Topper + Orly Kick Glass Top Coat
I was determined to try to salvage my mani, particularly as I was fond of the teal shade, so the next morning I decided to layer another topper over my nails; this time with Orly Kick Glass Top Coat, which has a milky white base and multi-shaped flakies scattered about. The polish is described as producing a shattered-glass effect and was inspired by the National Football League's first female coach (Jen Welter was an assistant coach intern for the Arizona Cardinals for training camp and the 2015 preseason). I have mixed feelings about this one. It's fussier than I expected but compared to Nails Inc Glittering in Greenwich, this Orly topper was a breeze to use. That said, I like the effect this Orly top coat can provide and am up for trying it with a different base color at another time.
10
Reply
20 Replies

Such a beautiful, sparkly and fun mani @itsfi! I am sorry that the toppers were a little bit of a pain to work with, but the results look gorgeous! 💙💙💙

@itsfi  The star topper is the best!!! And the teal is also gorgeous!!!

Thank you!! The combination is a pretty one @ather, especialy since there are different colored stars in the topper. 🌟

@CookieGirl1, thank you. A little more effort for these toppers but they do make for a fun look. 🙂

@itsfi I love the little stars 🌟.

@itsfi Beautiful base shade. I also have troubles with a star topper by Nails Inc. There are so many stars but it is really hard to get them on the brush!

@Mellmars1185, IKR?! You'd think with all the stars in the bottle, you'd have the opposite problem. 😂 I've found it helpful to pour out the stars into a small dish and pick them up from there, with the brush or a pair of tweezers.

Ugh, I hate fussy toppers 😣 The result is a fabulously sparkly starry mani, but I feel your pain!

If you don't have a glitter grabber topcoat, and don't want to use multiple layers of true topcoat, you can use a few layers of clear polish as a filler over the topper before adding topcoat. Another thing that can be helpful with particularly slippery toppers is to place the bits where you want them, then let them dry for a while before adding anything else on top, giving them a chance to set up where you placed them and reduce slippage. It's a PITA though, and like you, I'd just as soon avoid it!

@RGbrown, this is the fussiest topper I've used. I have 2 more from the brand and I'm a little nervous they'll need a lot of attention as well. But thanks to you and folks here, I have plan B, C, D... to address any fussiness. 😁 I'm pretty sure I have a glitter grabber top coat, though I may have lent it to a relative; will take a look into that. If not, time to pick up a glitter grabber top coat. Ha!

Sorry about all the pokey bits @itsfi I have no knowledge of topper troubles, there's alot of information in all the replies. I'm very intrigued as I read, amazing community knowledge 💙

I love the way the stars look on the teal, fyi. it's very magical evening.

@CynthieLu, this is such a fabulous thread! Made so by all the folks here - beyond the great mani's that people share, folks are super encouraging and kind, and as you said, so knowledgeable and helpful.

@itsfi  This looks great save for the snagging stars.   Is there any way to curl the stars before application?  Maybe stick a few in a plastic bag and give them a quick blast with a blow dryer to see if warmth will make them more pliable so you can give them the shape you want.  It works with lashes so maybe?  🤷‍♀️

@heartsmyface, oooh, hadn't thought of the blow dryer. Good idea! Making a note to give that a shot 😉 with either this one or another similar topper from the brand. That definitely works for my lashes so it's worth a try. Thank you!

@itsfi  Bummer about the topper trouble. 😞 I do think the stars look good with that teal polish, and Kick Glass really takes it up a level.

Confetti the size of those stars is usually a good time to use a texture smoother/filler (beneath a top coat) or a very thick plush top coat, or even 2-3 layers of a regular top coat. And even then, there might still be some pokey bits on a few nails. Sometimes I can bend dry confetti to better fit the curvature of a nail—if I'm patient enough. 😄

@WinglessOne, that’s a good call on the texture smoother / filler; thank you. I read that adding additional layers of top coat would help but I didn’t find that to be the case. If the stars were too close to an edge or side, that’s where poking could become an issue for me, but I didn’t have it on long enough to see if the other ones would snag or poke easily.

@itsfi  Yeah, for multiple layers of a "normal" top coat (like KBShimmer or Glisten & Glow's top coat) to smooth texture as much as a texture smoother (G&G's Glitter Grabber in my case) + top coat (like G&G's or KBS's), I'd need 5+ coats. 😄 Some people swear by Seche Vite as a texture smoother, but I stopped using that top coat long ago so I can't confirm or deny those claims.

@WinglessOne, I laughed at the 5+ coats - I hear ya! I ran out of patience at 3. 😆 I think I may have a half-used bottle of Seche Viche somewhere if I haven't rehomed it. Will have to see and if I do, I'll try it. Otherwise, I'll look for my G&G Glitter Grabber.

1 Reply
Conversation Stats
Photos3,102
Are you sure you want to uncurate this?
Cancel OK
testing