Start a Conversation
Add a Photo
Turn on suggestions
Auto-suggest helps you quickly narrow down your search results by suggesting possible matches as you type.
Showing results for
Search instead for
Did you mean:
Post in Nailed It
Posted 10-04-2022 | Updated 2 hours ago

@Titian06  This is a beautiful combo. Sorry Dance With Me was so problematic. It looks lovely paired with Parcs & Parasols though!

🥳 your two colors look sweet togeather @Titian06 , way to mix it up with something fun. It's hard but really rewarding to try new things 😁

Hooray for two shades! It's always fun to play with colors and see what works, and these are amazing together! ❣️

Broke into my new LynB Disney villains polishes this morning. 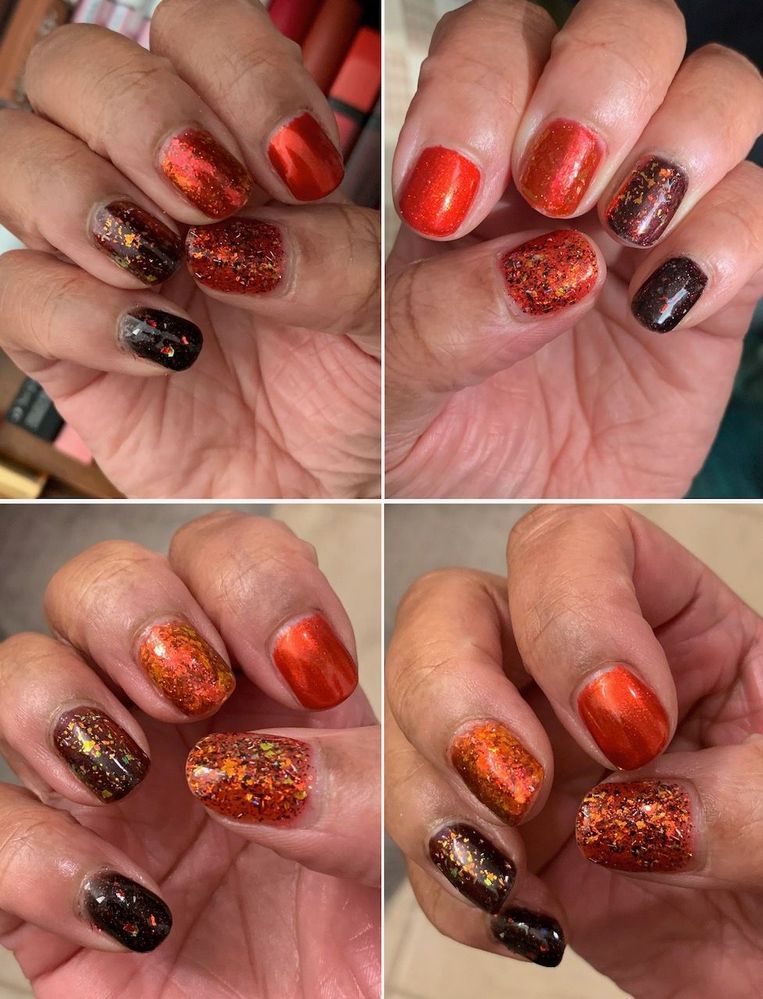 Clockwise from top left: indirect sunlight through a window, sunbeam through a window, and 2 temp/tint-adjusted photos taken in my bathroom lighting.
Details:
Spoiler
Everything’s 3 coats unless otherwise stated.
Thumb: LynBDesigns Say Goodbye to Prince Abooboo. A tomato red jelly bejeweled with iridescent flakes of green, gold, red, pink, purple, and black. Named after Jafar (Aladdin). This is a chonky one: a texture filler (in my case, G&G Glitter Grabber) is essential. I used an additional 2 layers of top coat: first KBShimmer Clearly On Top, then Glisten & Glow top coat. This polish is well worth the extra effort. Photos can't capture how shiny and jewel-like it is.
Index: Cirque Colors Firecracker. A bright red shimmer magnetic. I used a magnet only on the last coat, resulting in a very subtle effect that’s more obvious on my right index nail than my left. This one was opaque in 2 coats, but I wanted to lay down a fully opaque shimmer base and then pull a magnetic pattern over it via a 3rd coat. I might add a li’l somethin’ to these 2 nails in a couple days.
Middle: Phoenix New Blood. The fiery red, orange, gold, and green flake + random holo polish of my dreams. I wanted to see this against Prince Abooboo. The 2 polishes have similar base color and shifts, but New Blood’s got bigger flakes. I love ‘em both.
Ring: ILNP Eclipse (2 coats) topped with LynB Say Goodbye to Prince Abooboo (1 coat). Using Eclipse to give all those jewels a black-to-red duochrome base. Used Glitter Grabber to smooth texture, then topped with KBShimmer’s top coat.
Pinky: LynBDesigns You Fools!  A black jelly base full of iridescent flakes and glitter in red, white, citrine, aqua, and cobalt blue. I assume it’s named after Cruella de Vil (101 Dalmatians). Also needed Glitter Grabber, and I didn’t clean up well enough along one side of my right pinky: there’s still a red flake poking out there. Gotta tend to that before it snags on something and chips off. My photos don’t pick up all the glitter, especially not the random cobalt pinpoints. But they’re there.
KBShimmer Clearly On Top vs. Glisten & Glow top coat: Now that I’ve used KBS’s on my previous mani, I’ll say it does hold up to hand sanitizer a bit better than G&G’s. Otherwise, I get the same amount of chip-free days I usually get with G&G (5-10—and remember, some of that’s due to my choice of base coat). I do think G&G is glossier than KBS, maybe 5% more. But KBS’s top coat is a good one: it’s shiny and durable, and it doesn’t drag polish. It’s a worthy contender.
8
Reply
14 Replies

@WinglessOne, fall is my favorite season and I am lovin' the fall feels from this fabulous group of polishes. I don't typically gravitate towards brown and orange polishes but a few of the beauties here have me wanting to expand my browns and oranges immediately! 😍

Thanks @itsfi ! Heh, none of those polishes are brown. I suppose one of them might look brown on some people's screens because it's layered over Eclipse; it doesn't look brown in person though. 🙂

I don't have a ton of brown polishes, now that I think about it. I have some bronze browns and at least one deep espresso/nearly black cream. I probably ignore brown polishes out of spite because they get released as part of fall collections. 😂 As if fall's the only time anyone thinks of drinking hot coffee or notices the color of tree trunks, or whatever else brands claim is autumnal about brown. I know I've already ranted about that in this thread, so I'll spare everyone a second round. But seriously, fall needs a rebrand. Fall is waaay more colorful than brands want folks to believe.

Ha! There must be something off with my color settings - there’s a couple polishes that look brown. 🤔 C’mon iPhone!!

Yeah @WinglessOne, brown doesn’t seem to get too much love until fall and then it’s thrust upon us. But there’s so many more shades out there that give off fall feels than brown - greens, pinks, plums, rust, and so on and so on. I love muted, dusky shades year round and especially in the fall. Any shade can be fall friendly. I might just have to cull through my polishes to find the least likely fall color and wear it over and over again this season. 🤔

@WinglessOne I especially like how your ring finger polishes layer!

I hope LynB releases some of these mystery villain polishes as individual singles someday, now that the mystery bundle's no longer available. I also wonder if everyone got the same polishes in their bundle... I can see Jenna creating polishes for villains I didn't get in mine. I'm trying to remember what the promo image looked like for this bundle, because it showed some Disney characters; might've shown one or two for whom I don't have a polish. I could swear Kaa (Jungle Book) was one of those, though he's a villain only in Disney's movie adaption (vs. the original source). It'd be fun to have a Kaa-inspired polish.

@WinglessOne So I opened everything in the mystery bundle and in no particular order. Some of the names are silly but this is what they are!

Did you get the same ones?

1 Reply
Conversation Stats
Photos3,140
Are you sure you want to uncurate this?
Cancel OK
testing