Start a Conversation
Add a Photo
Turn on suggestions
Auto-suggest helps you quickly narrow down your search results by suggesting possible matches as you type.
Showing results for
Search instead for
Did you mean:
Post in Nailed It
Posted Thursday | Updated 13 hours ago

Hmmm, I'm not sure I've stamped with yellow specifically, but I do have some "stamping with regular polish" tips that might help.

Polishes made specifically for stamping are typically a bit thicker than regular polish, with dense pigment. Look for these qualities in regular polish for best results...one coaters, or particularly thick creams are usually most likely to succeed. If it's thin at one coat, it likely won't show when stamped, unless it's over a color that's much darker or much lighter, and it'll most likely be a soft wash of color, not super vibrant. Not every regular polish will work, sadly, so I like to paint out some scrap swatches on plastic and test a few different polishes at once to see which works best.

If you can't find a good stamping yellow in your collection, is this a design you could maybe rework into a reverse stamp? Maybe do the outline in a basic black or other known-good-stamper in your collection, then fill in with yellow and/or other shades for the pop of color you seek? Or even stamp it in white so the stamped outline disappears, if the design makes sense without a visible outline.

@RGbrown, wow! This is super helpful. Thank you for taking the time to write this all out. That makes sense about stamping polishes being thicker.

Reversing the color would totally work; I was just curious about stamping with a yellow polish. I’ll look into reverse stamping or finding a thicker yellow polish.

Thank you @RGbrown! To think I only had 2 yellows in my entire collection at the beginning of 2022. 😂 I’ve managed to increase the size of my oranges and browns too and there’s still a lot of the year left for more polishes. Oh goodness.

"...there’s still a lot of the year left for more polishes. Oh goodness."

This hit me hard the other day too. I just crossed 1400, and I'm fairly certain I hit 1000 either late October or early November last year (need to double check that...seriously, that can't be right!), so that means I've bought 400 polishes in 11ish months. This is ridiculous 😳😅

That’s not ridiculous @RGbrown! That’s some savvy shopping! 😉 There’s been a ton of crazy good deals and bundles throughout the year this year.

Oh squee!!!! What a cute little collection! Cherish these days, as one day, when it's bigger than you are, you'll look back and wonder where the time went and you'll realize how much joy they've brought into your life and you'll wonder how you ever survived before they arrived.

<Where's a stork emoji when you need it?>

Entirely too many good deals, and the holidays aren't even here yet. "Oh goodness" indeed! 😬

(side note, I edited my response to your original post of this mani, wanted to make sure you saw it, as you responded to it before I realized what I had done!)

@RGbrown, yeah, I’m a little scared for the holiday sales. 😂 In my head, I’ve mapped out a plan for not overdoing it, but the plans I make in my head don’t always get  implemented exactly the way I planned. 🤪

I went back to read your edited post and yeah, I still think it’s not that ridiculous. I may be a smidge bias but I’m sticking with “not ridiculous.”

(Not that post, back up one more before that!)

Hahaha @RGbrown! 😂 Got it! ✅ That was very thoughtful of you to edit your post but it’s all good - I completely took your original post to mean exactly what you intended it to mean, so no worries. Is that because we’re on the same wavelength or because it never would cross my mind that my posted mani was not pretty (l🤪😂😂😂), I don’t know. 😝 Maybe a little of both? Hahahaha!!

Great sampling of yellows, @itsfi ! 💛💛💛  I love the one on your ring finger.  Too bad about the Olive and June-- it's my second favorite because it has such a daisy/spring flower vibe to it. 🌻🌼💛

Thank you @Titian06! I’m still holding out hope that O&J Pineapple Slushie will be less finicky. 🤞🏼 I love the tone and hue of it. 💛

Here are my picks from the OPI fall collection 🍂 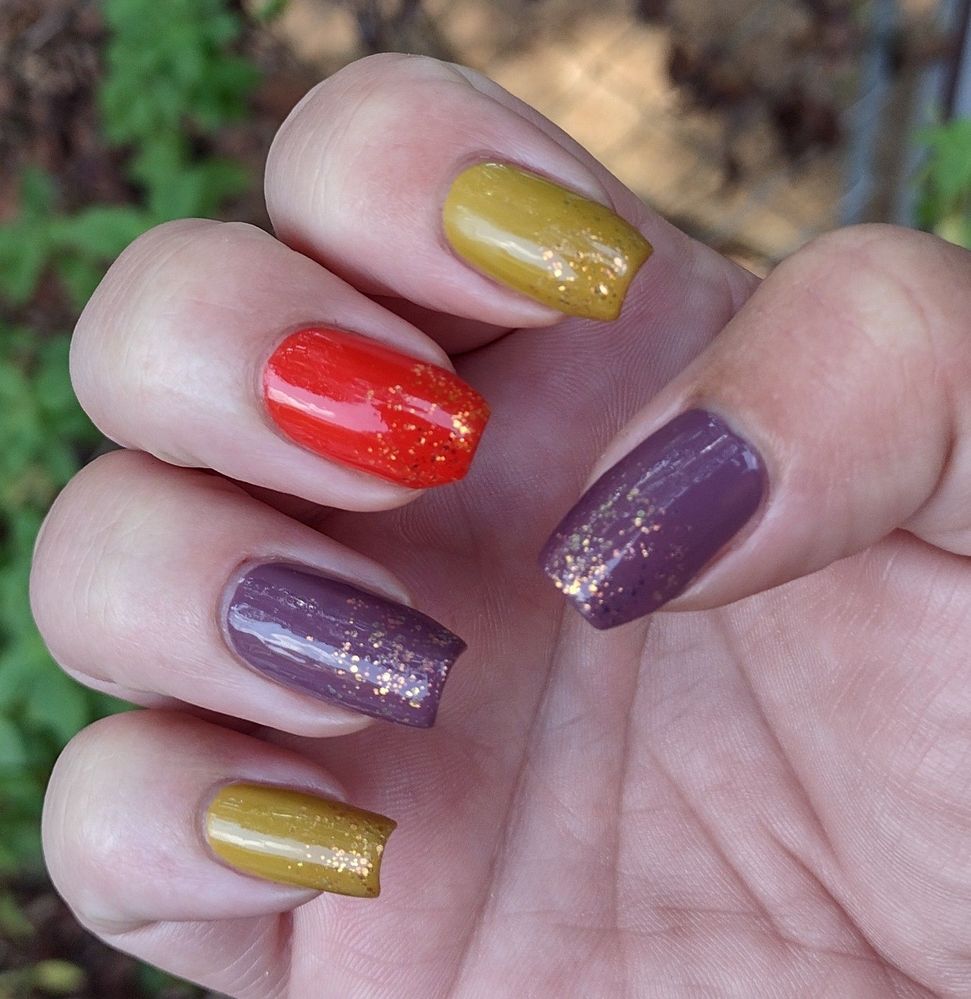 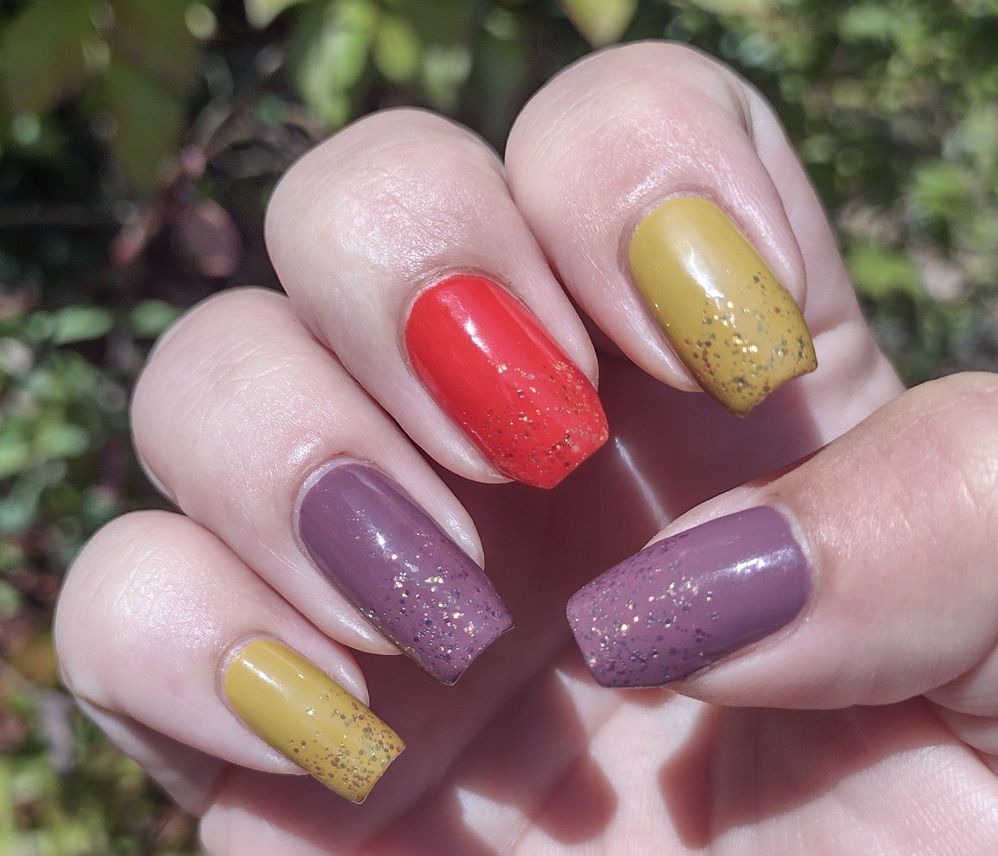 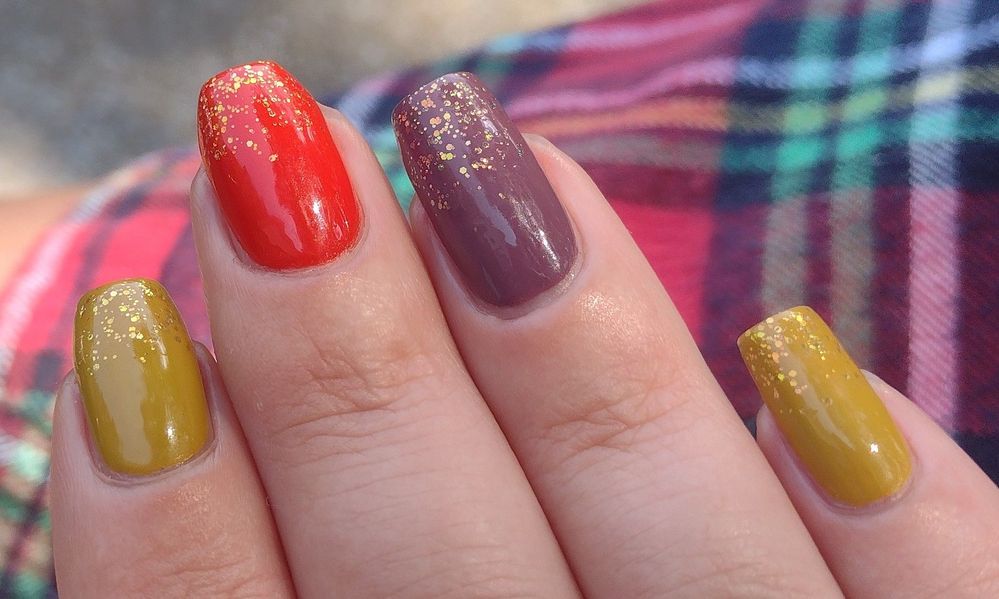 Another angle in the shade, I feel this one captures the topper a bit better, and is perhaps the closest of all three shots in capturing the tone of the yellow

Ochre The Moon: dirty mustard yellow, a hint of brown but I'm fairly certain there's also a pinch of green in it to bring out a touch of split pea undertones. It's gloriously prugly (pretty-ugly)...I really wasn't sure if I'd like it or not, but I definitely give it a thumbs up in looks!

Consistency and application wise, I'm actually surprised at how decent it looks on my nails today. It's a yellow, and that was apparent with the formula last night. A little chalky, doesn't self level well, generally a PITA. After being careful with the second coat, I couldn't quite tell if I had full coverage...were those dark streaks actually bare spots, or were they just shadows between the ridges that formed with each brushstroke? Who knows? Not me! And I don't care, I'm not doing a third coat 🤣 Topcoat smoothed all that out though, and my coverage looks pretty even to me, so I'd rate this as a cautious two coater.

Claydreaming: dirty purple cream. Super duper easy two coater, no troubles at all, and I love the color (though I should probably compare it to others in my collection...I probably have several that are close, if not dupes, but I can never seem to pass up a good purple 😬 )

Rust & Relaxation: super bright reddish orange (or orangey red?). Not quite neon (I checked it under my UV light and it doesn't glow lol), but not far from it either...not sure I'd call this one relaxing at all, it's quite the energy shot 😂. Easy two coater, though I do have a touch of nail line still visible, as this is more of a crelly formula than a full cream.

Topped off the tips with Ciate Starcrossed, a clear base loaded with red/orange/yellow and even a hint of green iridescent glitters in various sizes. This shows up best on the purple because none of the glitters fade into background color, but it's a lovely pop of fire on all three shades 🔥

I was sure I'd have a dupe for the purple and the yellow would be unique...turns out I got that bass-ackwards 😮

(all pics below taken with indoor fluorescent lighting...undertones aren't perfect, or even good lol, especially in the yellows, but differences can at least be detected) 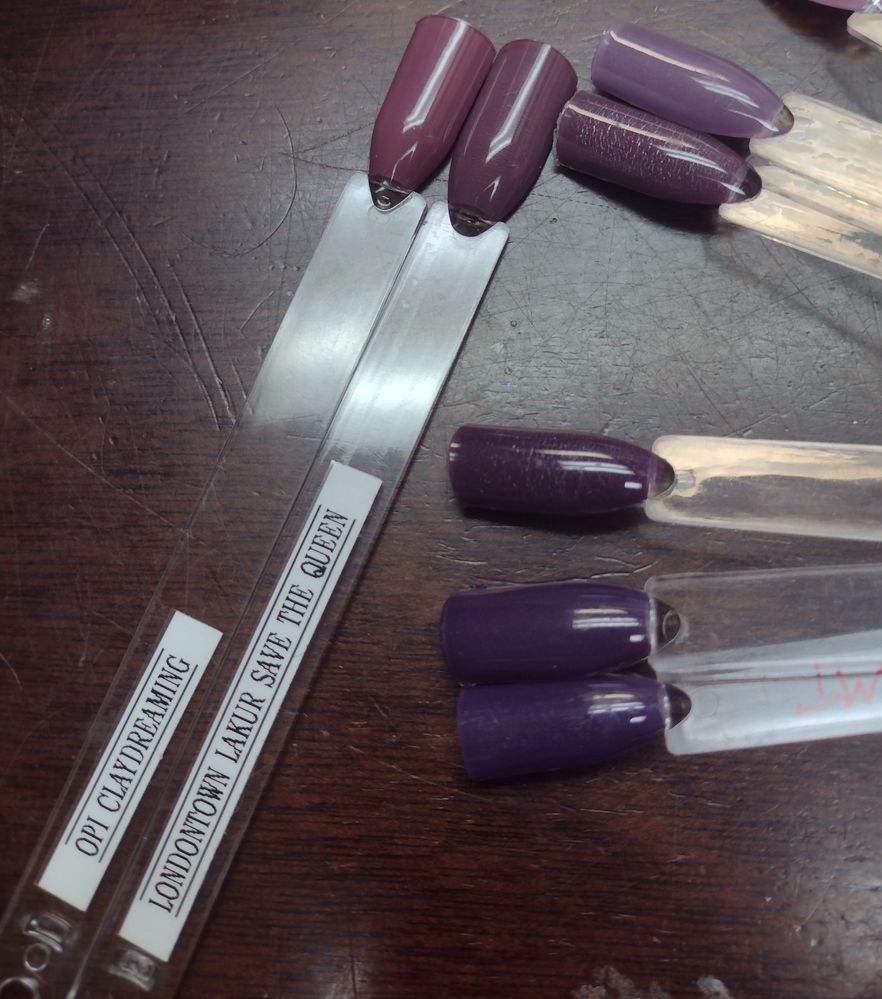 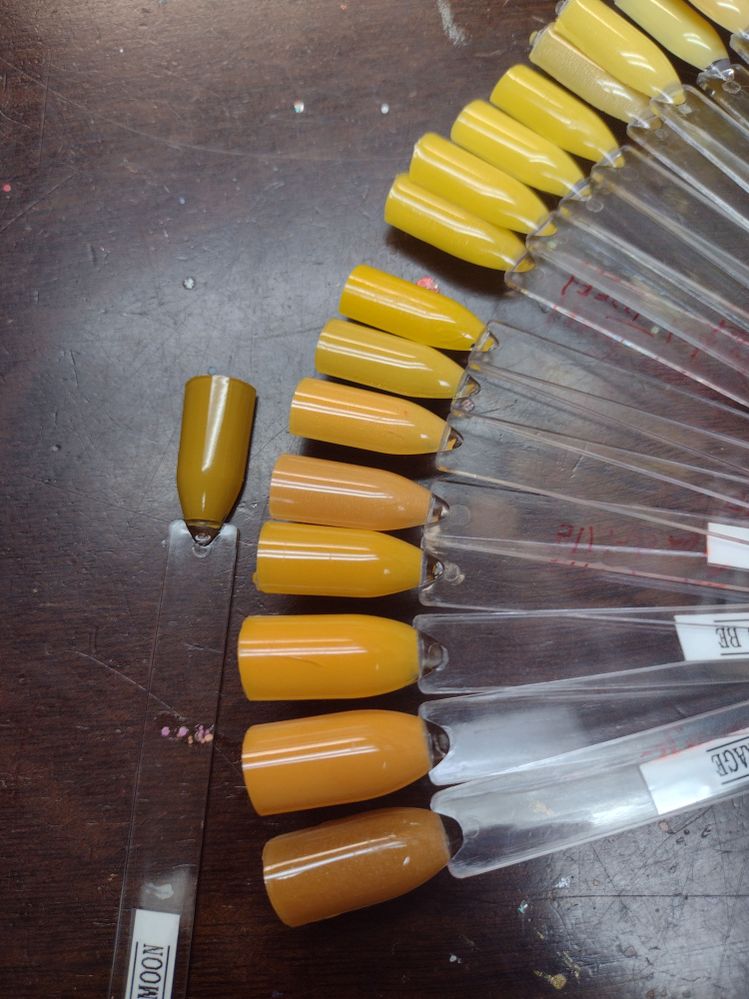 I started off comparing Ochre The Moon to my used yellows, and it was obviously dirtier/greener than any of them. 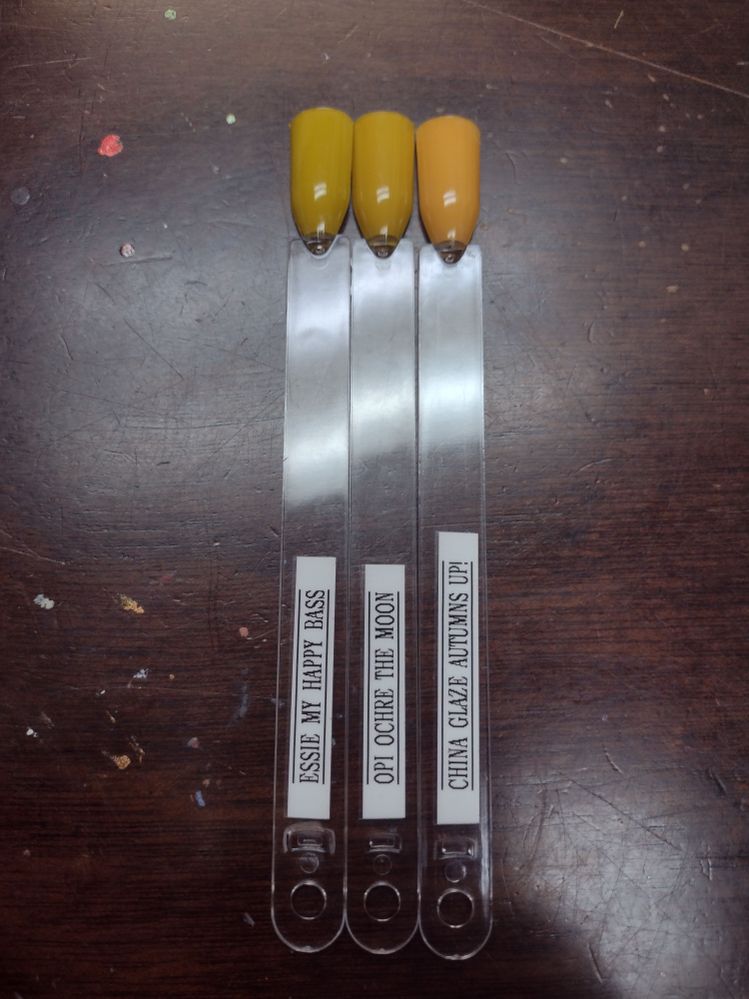 Once I pulled my unused yellows that might be close though, I found Essie My Happy Bass is dang near exact. In the bottle, Essie looks to have a touch more green, but the swatch sticks are nearly indistinguishable.

@RGbrown  Welp, you just saved me a little money: I already have My Happy Bass, and Ochre the Moon is the only polish from OPI's fall collection I really wanted, so... unless OPI's performs better than Essie's (sounds like it doesn't), I can stop thinking of buying it. Still a beautifully unusual color though. I like "prugly."

Now that I see your swatch comparisons, I wonder if I have a Claydreaming dupe. It looks very mauve-leaning to me. Knowing how I love mauves, I'll be surprised if I don't have something like this one—and that'll probably push me to buy it. 😂

The Ciate topper is gorgeous over each shade. 🎇

I specifically went out of my way to get My Happy Bass (and then promptly forgot all about it, but that's neither here nor there lol) but seeing Ochre didn't trigger any sort of "hey I wonder how close that Essie is?" reaction in me...in my head, Essie was firmly in "much greener than that" territory, so this was a surprise to me. Meanwhile, I was kinda shocked by how few purples I had that were close to Claydreaming. I only checked creams (which are a tiny subset of my collection...anything sparkly is definitely my priority), so now I'm afraid that subconsciously I'm going to be checking out allllllll the smoky purple creams to beef up my holdings 😬🤣

I forgot I had the Ciate! It probably would have been a better choice for my fall toppers combo earlier instead of the green/blue ILNP (red orange yellow is way more fall to me), but I didn't see it when picking shades that day. I think it worked out perfectly in the end though, as it was a fantastic choice over these shades instead.

@RGbrown  I am surprised you called Orche the moon prugly. I love it. So unique until you pulled out the dupe Essie one 🤣 still fun and I love the sparkles on top!! The claydreaming I wonder how close it is to CG belowdeck. Maybe that’s too dark to match and to grey. It’s a fun purple for sure!

It's pretty *and* ugly 😂 it really is a fantastic color for anyone that likes the oddballs (as I do...otherwise I wouldn't have two of the same shade now lol).

I wish I had that CG to compare for you, but I don't. This one is lovely though, if you decide to pick it up!

Conversation Stats
Photos2,434
Are you sure you want to uncurate this?
Cancel OK
testing