Start a Conversation
Add a Photo
Turn on suggestions
Auto-suggest helps you quickly narrow down your search results by suggesting possible matches as you type.
Showing results for
Search instead for
Did you mean:
Post in Nailed It
Posted 08-18-2022 | Updated 2m ago

I can see why you've been wanting this shade, it's magic 🎩 ✨️  I haven't seen any single shade look like that before  @CookieGirl1 . I wants it now 🤩😅

@CynthieLu it's too bad that it was ltd edition!

@CookieGirl1 So pretty and cool! Making note of this one!

@Mellmars1185 thank you!  Unfortunately it was ltd edition 😞

Such a bright and fun shade, @CookieGirl1 ! love it!

Ahhhhhhh that's simply stunning! Not sure I've seen a multichrome like that before, I love that's it's a bit lighter/brighter than the usuals...no wonder you hunted it down! 😍😍😍

@Titian06 @RGbrown it was a polish worth stalking 😉.

Wow @CookieGirl1 ! That polish is stunning and the shift impressive! 😍😍😍😍😍

@CookieGirl1  That's gorgeous! I love multichromes with strong shifts. Glad you finally got this polish!

That is a gorgeous color!

What a funny situation!!! It is the first time it happens to me. Yesterday I was doing stuff around the house and one of my nail polishes “shell” (I don’t know how to call it), suddenly fell. And then, later, another one. So I used my nail to remove all the remaining “nail shells” that came off fully in one piece. They look like if they were fake nails. All came easily off but the thumbs. I may save them and glue them on when I don’t have time for a mani! 😂😂😂

I applied many coats, but I didn’t apply more than previous times. 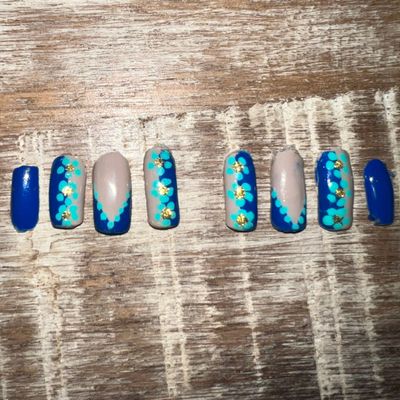 @Saradestin, it was late (or early, I guess depending on how you look at it) when I first saw the photo and I thought "she does her own press on nails"? 😂 Then I went back to read what you wrote later and wow! That's both crazy and impressive that that happened, but now you have your own set of customized DIY nails. That could be really helpful when you're pressed for time.

It was a funny situation @itsfi! They really look like press on nails! 😅

No way @Saradestin they came off all in one piece like that! After you did such an amazing job on them 💙🤍 I'm glad you got a few solid days of showing them off

Isn’t that funny @CynthieLu ? I am glad that I could enjoy them for several days before the funny event, and that I have them for a future quick “press on” mani 😂

@Saradestin Do you know who Simply Nailogical is? She uses a peel off base coat and has a ziploc bag filled with her nail polish peels lol Too bad about the mani, it's so pretty!

(one time I realized I had a naked nail, but didn't know where I lost the polish...forgot I had done dishes or something earlier that day. The next time I put my gloves on, I freaked all the way out when I hit something down in a fingertip...I keep them hanging up to dry, open at the top, and at first was convinced a bug had made its way into my glove. Nope, it was just that chunk of missing polish 😂)

14 Replies
Conversation Stats
Photos2,459
Are you sure you want to uncurate this?
Cancel OK
testing