Start a Conversation
Add a Photo
Turn on suggestions
Auto-suggest helps you quickly narrow down your search results by suggesting possible matches as you type.
Showing results for
Search instead for
Did you mean:
Post in Nailed It
Posted 08-18-2022 | Updated 10 hours ago

Purple is my biggest offender...I had to break down my shimmer/glitter ones by cooler and warmer ones and separate them into two envelopes. Pinks and blues are getting close to overwhelming the envelopes they're currently occupying, but I've still got some time on figuring out how to divide those. Meanwhile orange and yellow occupy one envelope together because I don't have all that many, especially yellows (though I've been trying hard to rectify that lately 😋)

Meant to stick this pic in my other post instead of the one with an envelope on top, so I'll just stick it here instead...here are all of the swatch sticks for my used polishes 😲 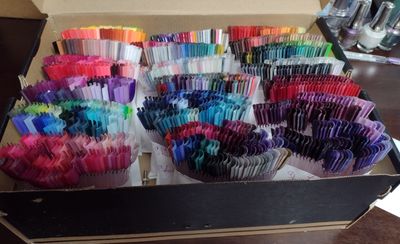 You'd think this would help me stop buying so many, especially when I discover dupes as I file them away, but nope, it doesn't really 😅

@RGbrown  Impressive! Also, this makes me feel better about my lipstick hoard. 🤣 I'm not surprised you have more purples than anything else. 💜

Ah lipstick, my other "I have way too much" collection (ok, eyeshadow too lol). I almost got motivated to go through them all a few months ago and declutter a bunch, and I was looking forward to doing it, but then my motivation just went poof and I never got around to it 🤣 One day though!

@RGbrown  I've been trying to do a 2nd major lipstick declutter for 2 years. 🤣 It... hasn’t gone well.

I'm not at the eyeshadow declutter stage yet; eh, I don’t have that much... it helps that several palettes are minis or quads. And I'm not about to declutter any Motherships. I could probably purge some singles, though. I'm confident I have far less eyeshadow than nail polish, which itself is far less than the amount of lipstick I have. This reminds me to take another pass through all my eyeliners though.

Wow @RGbrown ! I only have one word to describe your collection: IMPRESSIVE! 😍😍😍😍😍😍 And.... there is always room for a new polish here and there 😁

Well, relatively speaking, 20 at a time is not that much @RGbrown 😁

OMGosh, @RGbrown !  This is amazing! 😯  Of course my eyes went immediately to the purples at the bottom right! 😂💜

I go through periods where I force myself to stop buying purples, but I don't think it'll ever not be the largest color in my collection 😅💜

I can understand @WinglessOne! When you have so many polishes, you need serious organizational skills or you would get lost.

Hi, all!  I polished my nails last night for the first time in a good 7 years.  Thank you to @RGbrown for gifting to me her extra bottle of OPI 7th & Flower along with a couple of other colors (so it wouldn't be lonely in its new home 🤣 ). 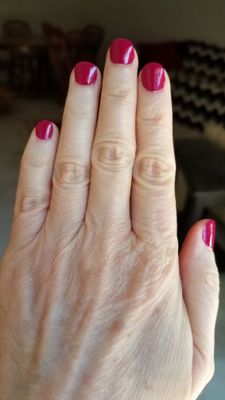 That's a great color on you, @Titian06!  Woohoo to painting your nails 🙂

@Titian06  This is a beautiful colour!!! Happy you are painting nails again!!

Squee!!! It looks amazing!!! Maybe this will be a new addiction? 😋 I hope you enjoy them either way, even if it's only a passing fling 💖

I'm in love, @RGbrown !  I don't remember why I stopped, but my love for wearing polish is still there. 😊  I don't think it'll be an obsession, but it won't be a passing fancy either!

That colour really suits you @Titian06 those nails look fab! 🦄🤩

That’s a gorgeous shade @Titian06 ! I love it so much. Beautiful mani! 😍

Conversation Stats
Photos2,456
Are you sure you want to uncurate this?
Cancel OK
testing