Start a Conversation
Add a Photo
Turn on suggestions
Auto-suggest helps you quickly narrow down your search results by suggesting possible matches as you type.
Showing results for
Search instead for
Did you mean:
Post in Nailed It
Posted 12-05-2021 | Updated 45m ago

@Kim888 they’re so cool and shiny in person. So far it’s all hits with this brand!

Oh yay, they all look great! I think Kaleidoscope is my fave of the bunch, I love a good rainbow!

(now I'm kicking myself for not even looking at their toppers/flakies...what????? How did I miss them?)

@RGbrown Paradox (H) also has a ton of holo sparkles just no flakies. I didn’t get to catch them in the picture. I was looking on their website at my order and apparently I have $13 to spend on their website now bc of the amount I spent which is pretty cool.

I logged in to look at my points earlier today, and while I knew that they gave double points for BF, I think existing points were also worth twice as much during the sale? I had 50 points before I placed my order, and during checkout, it said I could redeem them for $5 off. I didn't spend them, figured I'd bank this order with them and have a nice little chunk for the future, but now my 180ish points are only worth $9, not the $18 I thought I'd have. I'll save them for the next BF sale anyways, where I assume they'll double in value again, but I was thrown off a little seeing that total today.

@RGbrown it might be that they have promos throughout the year where your points are worth double, not just BF. I ended up getting 263 points with my 15 polishes. I’ll try to hold off and see if they run any double point promos before cashing in.

The Tart Peach Black Raspberry is a creamy, deep, dark plummy purple with very, very fine, subtle silver shimmers. The silver shimmers in Essie Set In Stones (ring finger) are a lot less subtle. 😂 ✨ The plummy purple hue wasn't coming through in some of my pics with indoor lighting so I took a closer shot in natural light so hopefully the purple shade shows up truer to what it looks like in real life. 💜 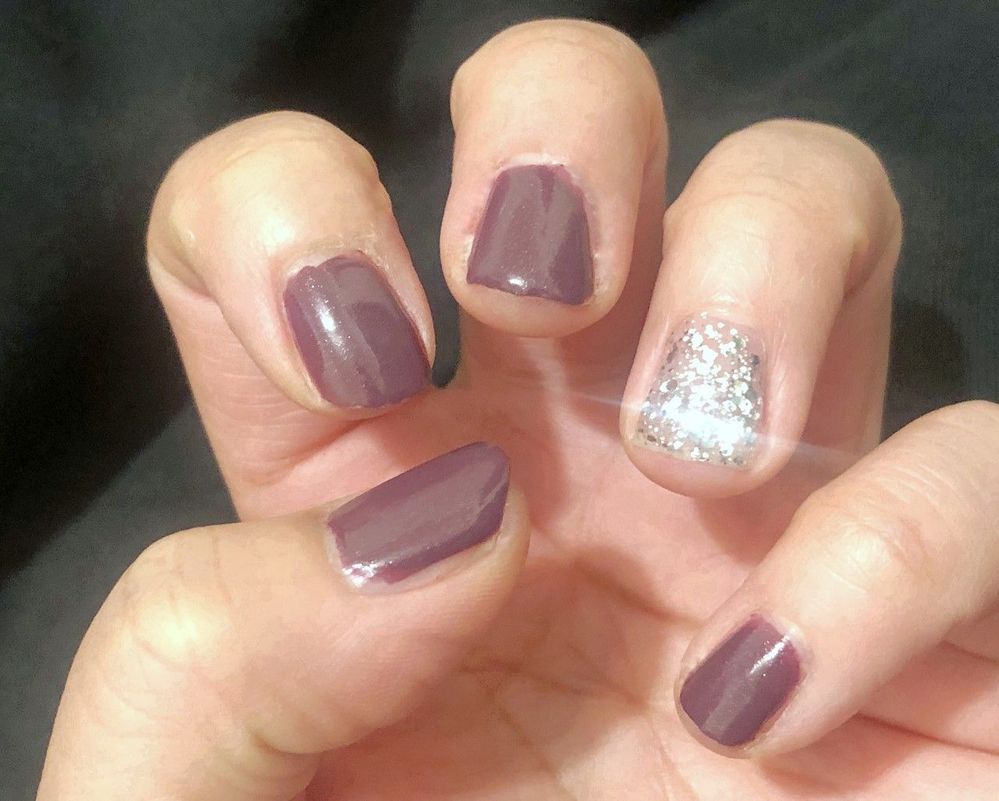 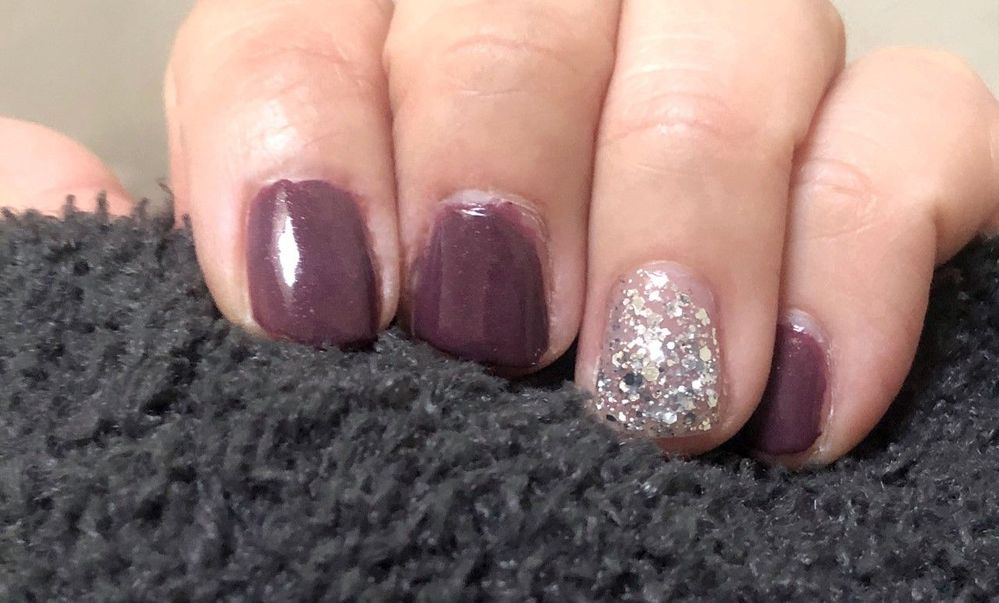 @itsfi - Love the plum color and the accent finger is perfect!  💖💖💖

Thank you @Titian06! 😃 This sparkly silver polish will see a lot of use this holiday season! 😍

Ooohhh, what a gorgeous purple! I love it! 😍 And of course sparkle is always a welcome addition ✨

@RGbrown, thank you! I started with one Essie polish from this collection and looooved the bling ✨ 💫  so much that I’ve picked up two more polishes from this series! Not sure how that is in keeping with a  polish low buy but the sparkle is just too good to resist.

Does having those three keep you from buying other sparkly polishes in similar shades? Then that's your low buy justification 🤣

LOL! I think having these 3 keeps me from picking up more in similar shades for now @RGbrown! 😝 😂

Was the low buy ever intended to be permanent? If not, consider "for now" as a victory 😋

That’s so pretty @itsfi ! I love the accent nail on the ring finger, lt’s blinging!

@makeitup305, oh my goodness! I was so happy when the lighting picked up the bling when I took the photo! 🌟 💫

While I'm (im)patiently waiting on BF/CM purchases, I managed to catch a wee bit of holiday spirit 🎄

Morgan Taylor Mistress of Mayhem is a lovely deep forest green with a smattering of gold sparkle. A touch sheer, it needed three coats, but the end result is worth it

Morgan Taylor All Tied Up...With A Bow is a red jelly loaded with tiny microglitter and a pinch of larger lavender holo glitters. Truly stunning IRL and I hate my camera 😋 Easy two coat sparkle bomb

Cupcake Polish Icing, silver holo, I think meant to be more of a topper, but mostly opaque after two coats.

I did the stripes with vinyls from What's Up Nails, but dang, they were fidgety to work with, and while the end result was pretty nice, it took some careful clean up where some polish bled under the stripes and made blobs. It was after 1am and I wasn't about to repeat the process on my thumb like I had originally planned, so dots became the new (much easier) design 😋 I adore the stripes though, will have to try again one day where I have more time to play and perhaps tweak my technique! 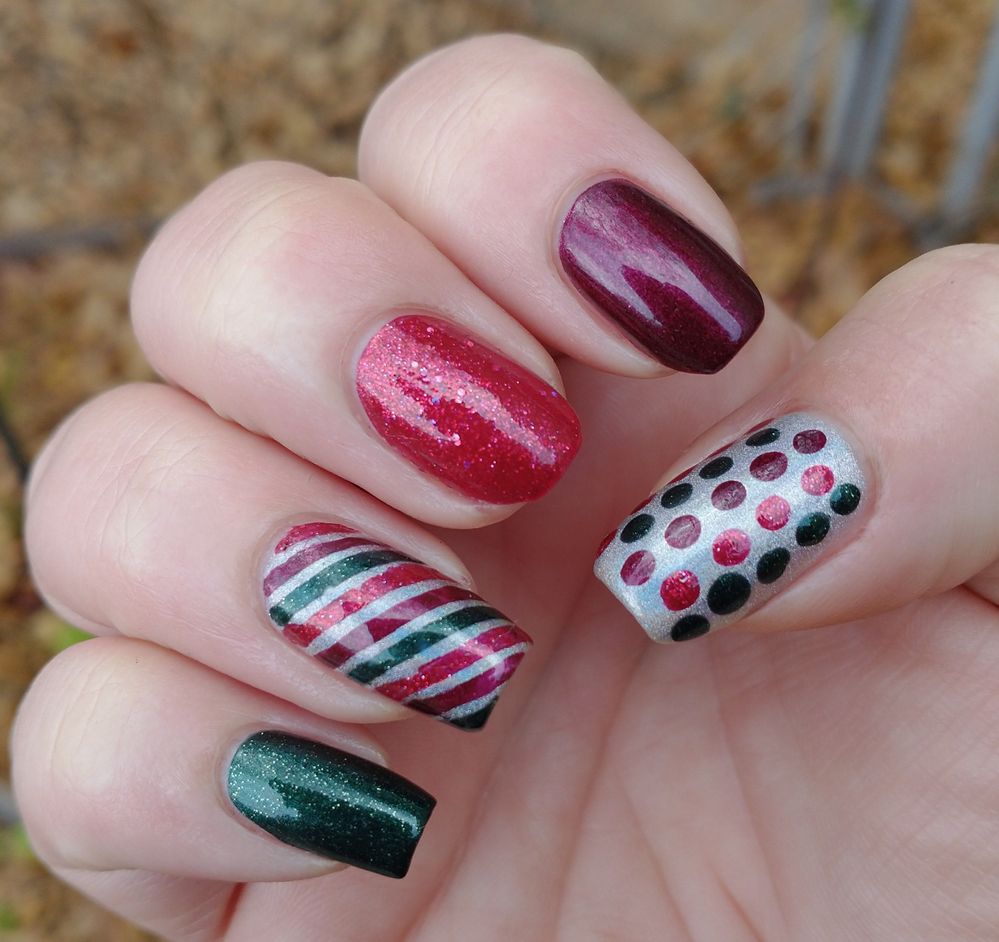 This is just darling @RGbrown ! Love coming on here to see your creations and these by you, @itsfi and @makeitup305 do not disappoint. So festive! ❤️💚🤍💙