Start a Conversation
Add a Photo
Turn on suggestions
Auto-suggest helps you quickly narrow down your search results by suggesting possible matches as you type.
Showing results for
Search instead for
Did you mean:
Post in Nailed It
Posted 10-26-2021 | Updated 6 hours ago

Thanks so much! While the collection may not scream "holiday" to me, the colors are gorgeous 💖 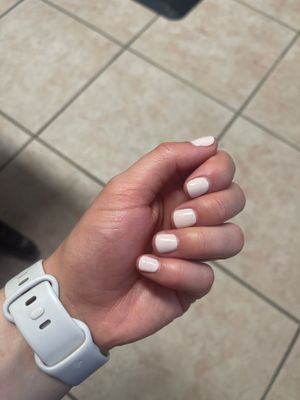 That looks great, so clean and fresh!

@ElyBerg, beautiful mani! 💅 I have the hardest time applying a white polish without streaks; yours looks amazing! 😍 What polish did you use?

Tale of the Midnight Ride by Zombie Claw Polish (PPU Sept 20...yep, a whole year ago now. My backlog is ridic 😂)

This is a glow in the dark multichrome. The multichrome function is fabulous, but so far, the glow in the dark part is disappointing...it says it charges by either sunlight or UV light, but it's cloudy and grey and drizzly today, and my little travel Zoya LED light doesn't do a whole lot for it. I can get a hint of a glow, but just the light from my phone screen (which is almost completely black when it's in camera mode in a dark room) is enough to blot it out and prevent me from getting any sort of picture. Ah well, maybe we'll get some sun one day soon and I can try again.

The shift is great though! Teal and purple are the most prominent shades, but as I move around, I can see a royal sapphire blue and a deep magenta berry that almost drifts into burgundy territory. I can't pick most of those up on camera, unfortunately, so you'll just have to imagine them in your head 😋

Three coats, which is pretty normal for multichromes. The first coat was thin and watery, but streaky and it thickened up quickly. The second coat gave me more even coverage, but still left a few sheer spots, and was also a bit quick to thicken up and get blobby. I added a little thinner before the third coat, and that helped smooth out the application a bit. 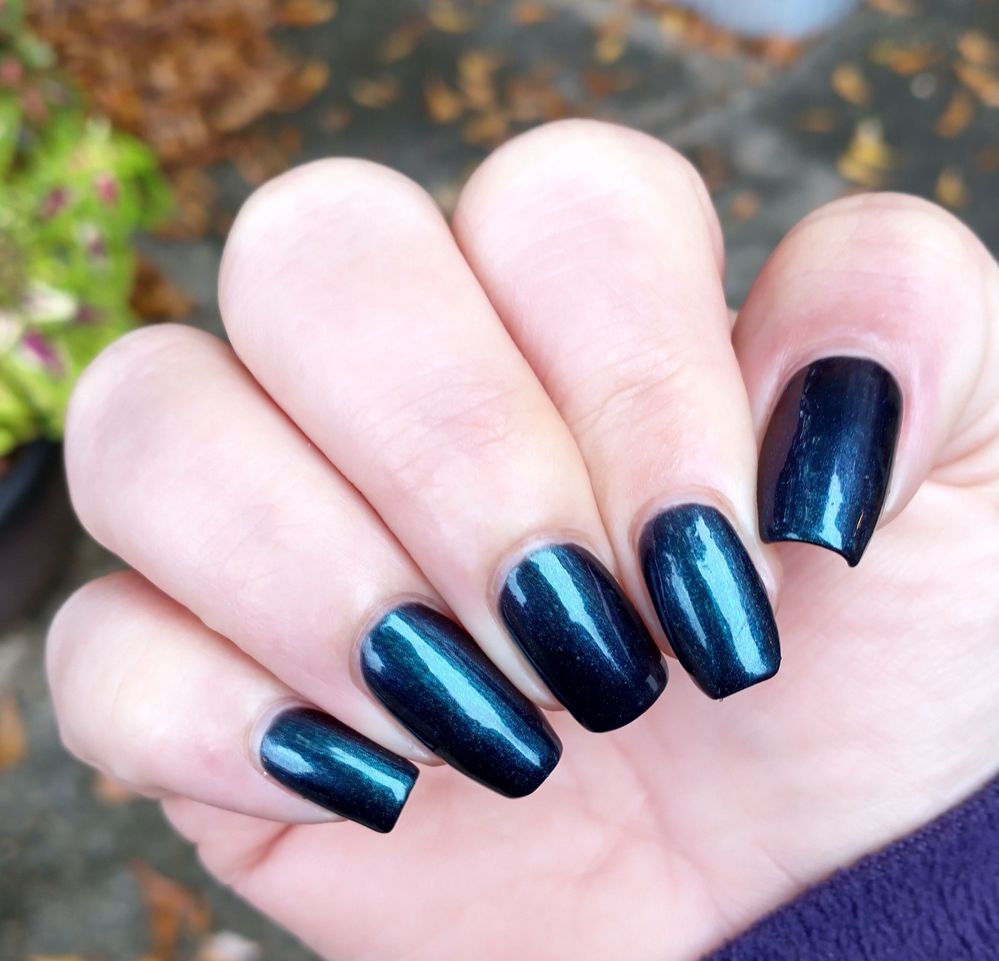 It's a touch greener IRL, but the teal is what I see most of the time 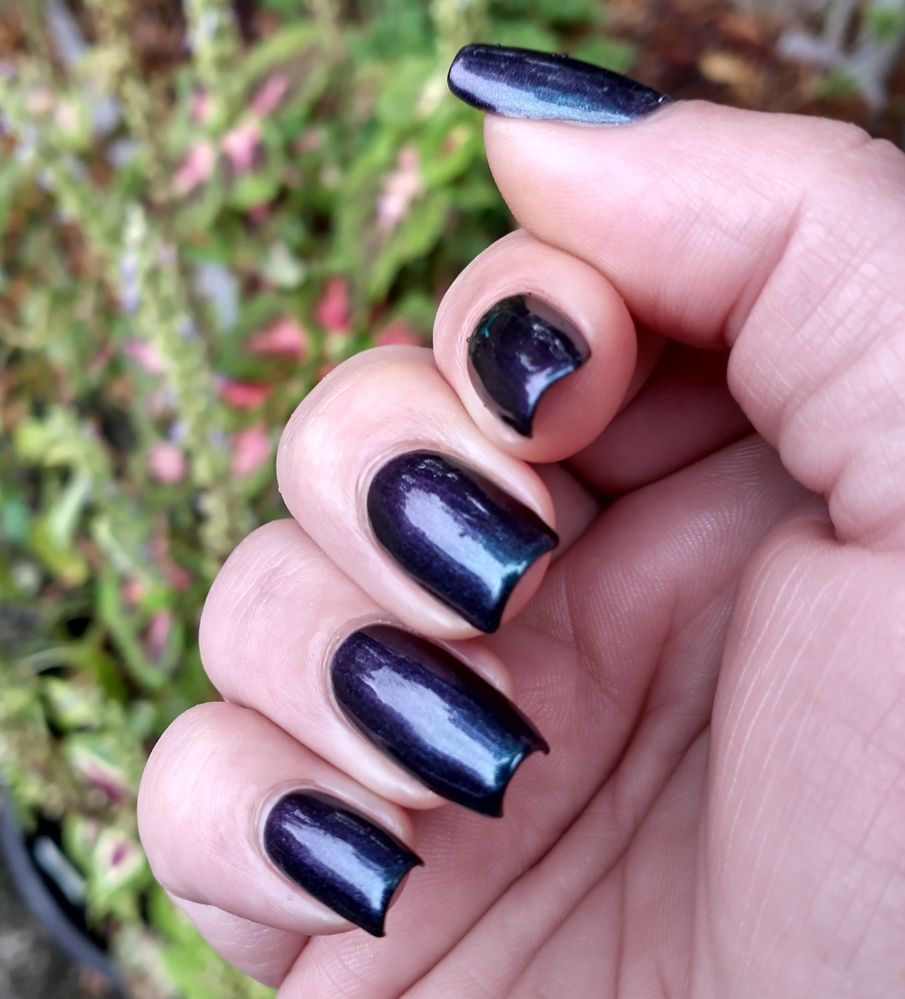 Shifting into blue and purple territory, which is again more vivid IRL 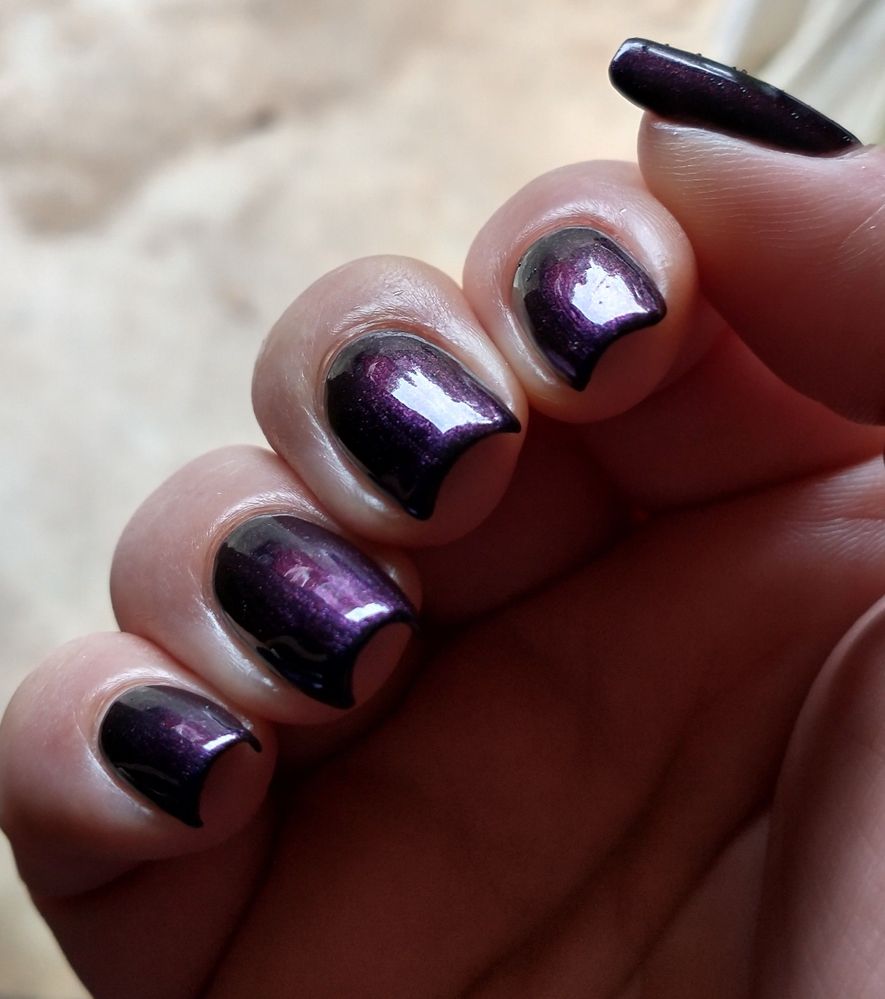 And with my first picture, I gift to y'all the joy of what had been dubbed as the "cursed pose" on Reddit. Someone posted a pic of their thumb lined up with the rest of their fingers a few days ago and it has spread like dang wild fire...it's impossible to navigate redditlaqueristas without seeing dozens of them lately. It makes me deeply uncomfortable, so of course I had to spread the love 🤭 My thumb doesn't actually bend that way very well, and it's a struggle for me to even get it as close as I did...but I'd be curious to see if anyone here can do it better!

@RGbrown, ahhhh, that shift is gorgeous! 😍 To think that your pics doesn't even capture all of it - I can only imagine how stunning all those shades look in one polish in real life.

I chuckled at "My backlog is ridic". 🤣 I ask myself how this happens a lot. 🙄 Well, I don't really think I'm in a position to say anything about a backlog of polish (or a few other things really, lol) so I'll just ask this - would you prefer to be the pot or the kettle? I don't have a preference for myself. Hahahaha!

I'm about to have to give up hope of making it until the end of the year to hit 1000. Even after decluttering Sally Hansen and Formula X, I'm waiting on a couple of orders that will put me at 998. I discovered yesterday that TJM has upped their OPI price to $4.99 from $3.99, so that'll help curb the desire to buy from there, at least 😋

That pose gives me the shivers (and a sore thumb) 😂

@RGbrown I tried and I can't even get CLOSE to doing it.

This took multiple practice sessions over several days...I hate it, but was also strangely drawn to it 😂 Some folks though seem to be able to do it like it's nothing 😯 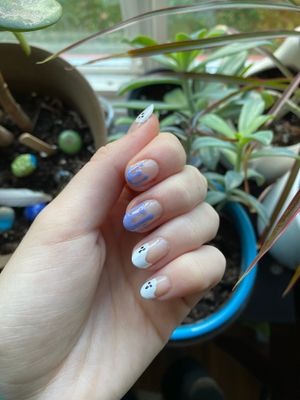 Did some simple Halloween nails and really feeling it:)

Ahhhh, those are so cute! I love the ghosts and slime combo! 👻

@jumproper, love your nail art! Those ghosts in particular are spooktastically adorable! 👻 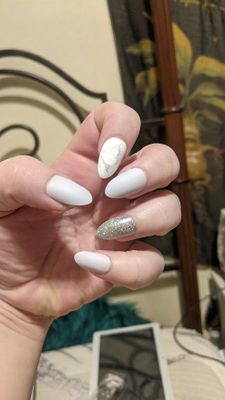 Just went on vacation and used these Kiss press on nails. They actually lasted the whole trip! very hard to text and type with them.

@Samtian, that's impressive that it lasted so long. It's been a while since I've tried press on nails - I have a lot of memories of them popping off at the most unfortunate of times shortly after I applied them - user error on so many fronts. lol. Great to hear these have some staying power. Hope you had a fabulous vacation!

@itsfi Haha that is usually how it is for me too. Thank you I did!

They look fun and fabulous! Press on have really come along way these days, I love the sparkle and marble accents. Longer nails definitely take some work to get used to though! ❣️