Start a Conversation
Add a Photo
Turn on suggestions
Auto-suggest helps you quickly narrow down your search results by suggesting possible matches as you type.
Showing results for
Search instead for
Did you mean:
Post in Nailed It
Posted 10-23-2021 | Updated 10 hours ago

I spent the weekend helping my sis and BIL with some home improvement/remodeling projects, and desperately needed a polish change last night, but was way too exhausted for anything more complicated than one color. Perfect time for a fancy statement polish ❣️

Different Dimension polish, He's Not The Sun You Are

A gorgeous color, hard to describe. A deep but faded raspberry red in most lights, though at lower lights it takes on a purplish berry tint around the edges. It's got a bit of super fine gold shimmer that really only shows up close, but it serves to add another layer of dimension. And the holo flakies, oh my, it's loaded. ✨ Easy two coater!

Lotsa pics because I can't help myself with this one 💕 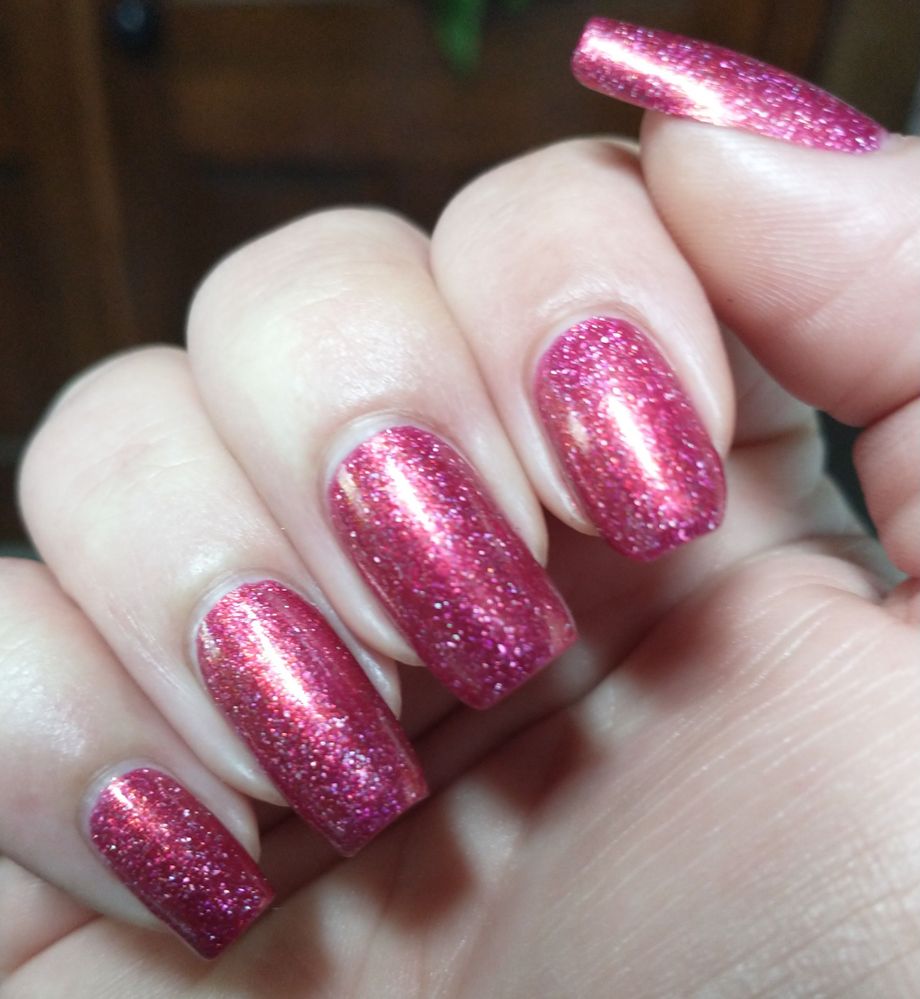 Sparkle is a must! ✨

I came away with some discoveries and “lessons learned” from this mani - first, I rediscovered my fondness for OPI Passion - it’s off the chopping block and back in my nail polish library. 😉 Second, painting a heart on my nails is a heck of a lot harder than I thought. After repeated fails (and some interestingly shaped hearts) over the course of half an hour, 😔 I finally decided to move onto a completely different design on my thumbs. 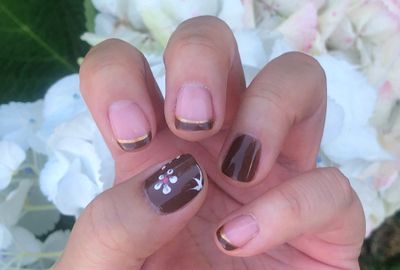 Ring finger and base color for Thumb: OPI Infinite Shine Cliffside Karaoke - this is a  brown polish I can get behind. 🤎

Thank you @Titian06! Doing my nails has served as a nice "time out" from my day-to-day. 😊 It's also helped to sort through and rehome / destash some polishes. lol.

@itsfi  Wow!!! I can’t believe you did this on your own! My mind is blown. You are soooo good. I think this looks way better then the hearts! Classic!

@ather, thank you! 😊 I had an extra day off so I had more time to play and experiment (and watch a YT video over and over and over … to do the flower 🌸 🤣).

Ahhhhh, this is fabulous! I love the mix of designs, and those shades all work fabulously together 💕

How were you doing the hearts? If not by dotting tool, give that a try! (It's still tricky, and it's not something I've practiced a ton, but they came out fairly decent the time or two I've done them that way)

@RGbrown, I hadn’t thought of using a dotting tool; thank you! 😃 I will try that another day. I used a nail art brush. I was able to draw a semi decent looking half heart at each try - it was everything else that did me in. At one point, the “heart” took on the shape of a partially deflated football. 🤪 I know, it’s a true talent to put together a design like that! 😂

Hahahaha I can only imagine! 😅

With a dotting tool, just drop your dot, then lightly drag it down; you'll wind up with a point at the end, and just repeat next to it, dragging the second point towards the first. Some of mine still came out quite goofy looking, but it's a little easier than a brush!

Ahhh!!! Thank you, thank you @RGbrown! That sounds much more doable than trying it with a brush! 😃

@CookieGirl1, thank you. It took a while to get them this way. 😳😆

I had/have plans for stamping on top of this, but was way too short on time last night...hopefully I'll be able to add it on at some point soon!

From pinky to thumb 🎃

Dark grey loaded with silver microglitter. Easy to work with, two coats. While it didn't seem all that textured to begin with, it took two coats of top coat to smooth it out.

Pretty lime green cream. Not terribly difficult, but I did manage to overwork it into a couple of bald spots on the second coat, so I needed a careful third.

Pale orange jelly absolutely loaded down with gold shimmer, giving it a much richer finish on the nail compared to how it looks in the bottle (it looks more like a dusty peach shade before applying). This took three coats, though it wasn't streaky or grouchy about it, it's just sheer.

I believe this is discontinued now, but I picked it up in a private sale a while back. IIRC, the description was "matte black", but to me, it looks more like a dark charcoal, not quite black, though maybe that's a side effect of the super fine silver shimmer running through it. It dries to more of a satin finish, not quite fully matte, and was super easy to work with. The first coat was watery sheer, and I was worried I'd need three, but two coats was plenty.

Gorgeous blue leaning purple shimmer. This was still a touch sheer after two coats and needed a third.

Got some time last night, and used alllllll the stamps 🤣 Stamping done with Morgan Taylor Black Shadow and Zoya Aspen

@RGbrown  Wow it’s crazy how some spooky stamps really change the look of these!!