Start a Conversation
Add a Photo
Turn on suggestions
Auto-suggest helps you quickly narrow down your search results by suggesting possible matches as you type.
Showing results for
Search instead for
Did you mean:
Post in Nailed It
Posted 07-29-2021 | Updated yesterday

Ahhhhh, that is fantastically bright! 😎💚

Hey, y'all!  I decided it was time to update the main post for this thread.  I replaced the pic of my early attempt at nail art with the latest nails my daughter and I got done at the salon.  💗💗💗

Ah yay, it's great to see you 'round these parts again! And I love the swirly nails! ❣️

Thank you!  Abstract nails are so much fun - I may try to do some at home soon - we'll see!💗

I've been considering some sort of swirls/splotches/blobs myself recently...perhaps we both should soon!

I present the Four Day Manicure 🤣

So, while I have decided that orange isn't a bad color after all, and have enjoyed the several oranges I've picked up over the last two years after turning my nose up at it for the previous 43, highlighter neon orange still just isn't my jam. I thought the purple might tone it down for me, but no, all it did was make me sad I "wasted" that gorgeous purple on a mani I wasn't thrilled with 😋 After doing that last one on Thursday, I took it off Friday and attempted to start this one. I got my base colors down, but ran out of time for the gradients, and figured I'd finish up Saturday. But alas, life was not so lenient...I had to redo 7 out of 10 Sat night after I caught a sudden bug to wash my cars (leaving me not enough time for the art, sigh, and breaking a nail in the process) and Sunday night, I was too tired from yard work to mess with them. Thankfully today has been quiet, and I finally got to finish them up! 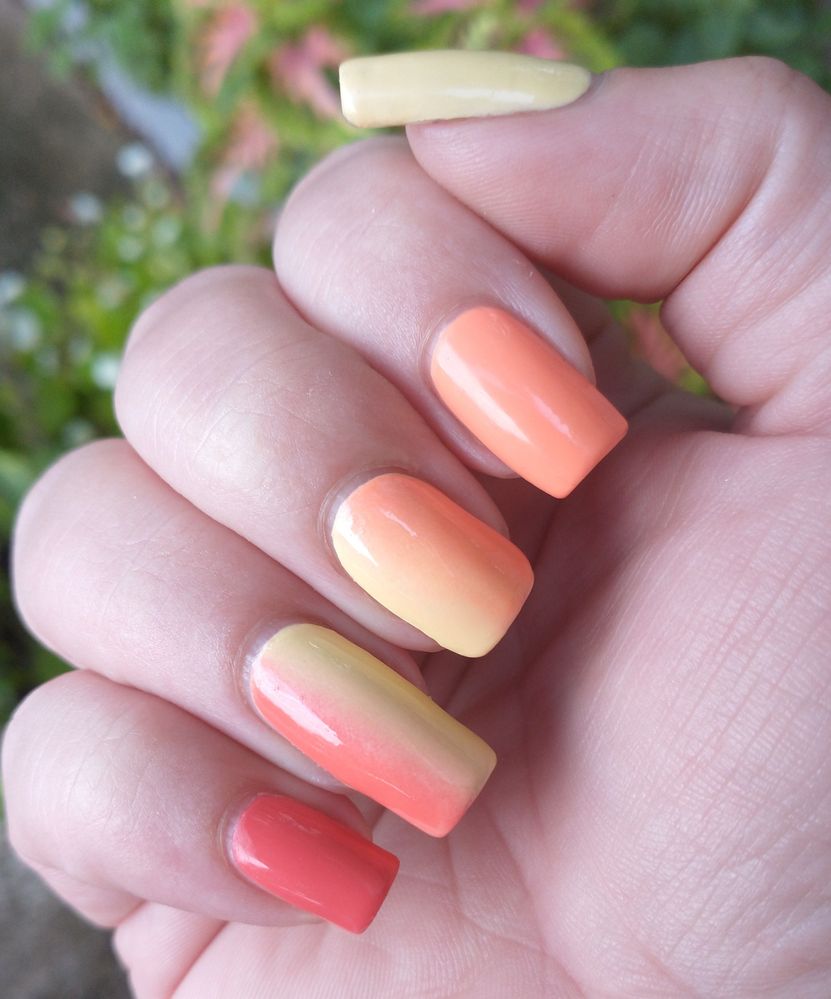 Tried a vertical gradient for the first time 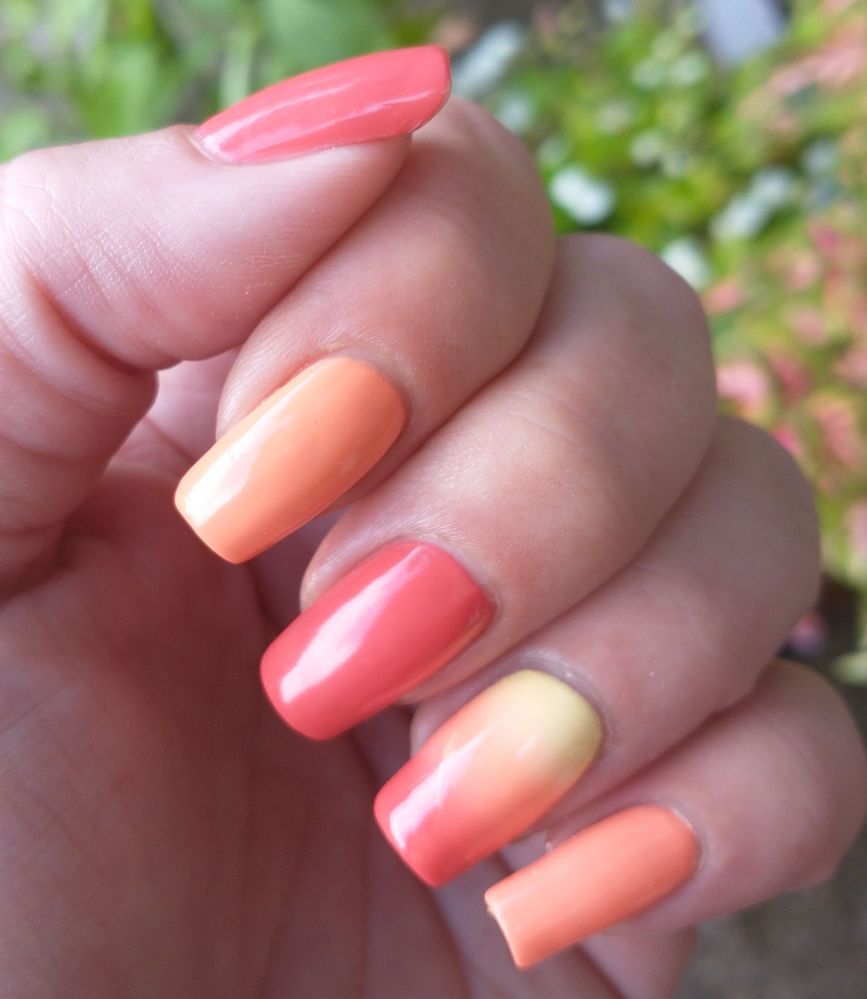 I wish the orange showed up better...my ring finger has quite a bit more oomph to it IRL.

Morgan Taylor Get Sporty With It:

Hard to describe, sort of a washed out neon red with a touch of coral. Super bright, super fun. Apparently this is from a really old collection, as it doesn't have the MT brush I know and adore...it's more like OPI's, flat but not very wide, and with a flat end instead of curved. Somewhat sheer, a touch streaky, required three coats for mostly-full opacity (though I think a better brush might have helped this one).

Morgan Taylor I'm Brighter Than You:

Very bright peach shade, nearly neon maybe, but in a creamy/sherbet way, not highlighter scary lol. As always, my phone just won't pick up bright orange tones well... it's much brighter IRL. This one wanted to get streaky, and took three coats. My first true disappointment with the formula of an MT polish, though I think I dated this one back to something like 2014 or 2015, so perhaps they improved their formula at some point after this collection.

Morgan Taylor Ahead of the Game:

Soft yellow cream with some pearly shimmer in the bottle, but the shimmer is negligible on the nail. Typical yellow behavior...while I was hoping for better since I adore MT, I wasn't surprised when it was fussy. From the same collection as the red with the smaller brush. Three coats.

Overall I'm super happy with how this turned out, even if it was a bit of an ordeal to get here. I love these three together 😍

Ahhhh, forgot to try the white background to amp up the orange a bit. It worked, though I think it skewed the red a bit closer to orange as well, instead of the bright pinky/coral red it is IRL, oops. A couple of new shots in the spoiler! 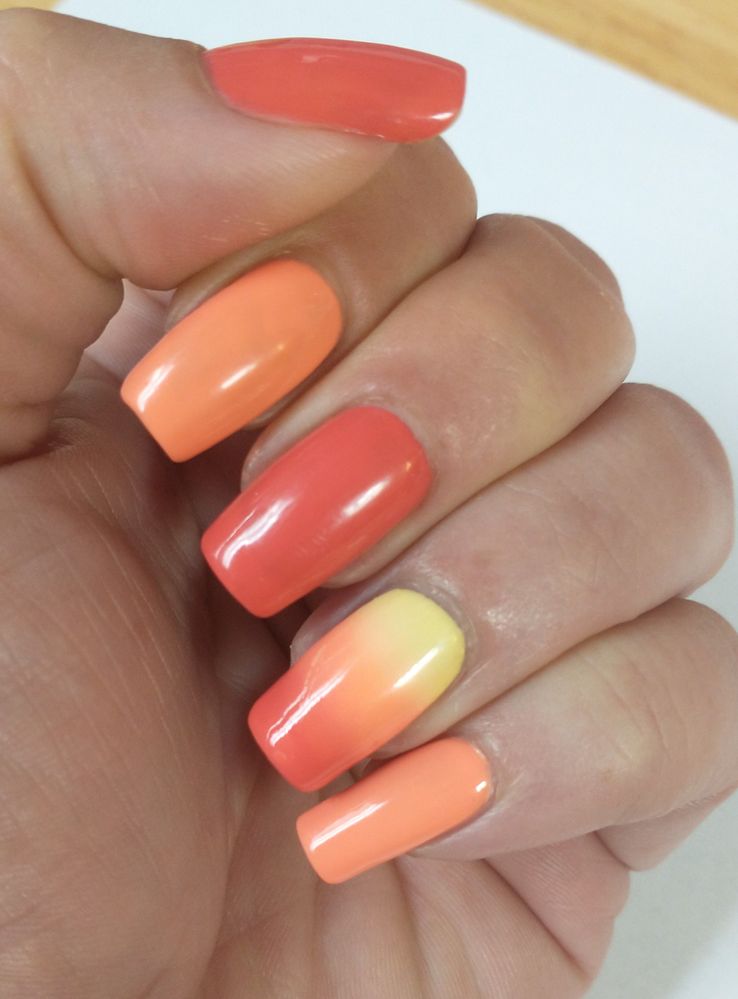 @RGbrown  So pretty!!! Too bad you had to redo some and broke a nail

@RGbrown Oh I love this so much!

This manicure turned out beautiful!!!!  It was worth the long process - lol @RGbrown

Absolutely gorgeous @RGbrown! 😍 Your mani here is making me want to at least look at my orange polishes. The vertical gradient is beautiful. I have on my list for the summer, to make an attempt at a gradient. Have the colors set aside but haven't made a move toward them yet. I imagine the vertical one is harder to do, yes?

Nah, I wouldn't say harder...it's really just a matter of which way you put the stripes of polish on the sponge. With only two shades, making sure I didn't bounce around too much to wind up with my middle completely off center was a bit of a concern, but still a fairly minor issue.

@RGbrown  Wow, you did a fantastic job. I love that!

@RGbrown Wow! This is stunning! Your mani skills are awesome!!!

Aw shucks, thank you! Gradients are definitely not that hard though...if I can do it, anyone can! You just need a damp sponge (like cheapie makeup wedges), and some liquid latex is a nice addition to help minimize cleanup.