Start a Conversation
Add a Photo
Turn on suggestions
Auto-suggest helps you quickly narrow down your search results by suggesting possible matches as you type.
Showing results for
Search instead for
Did you mean:
Post in Nailed It
Posted 05-09-2021 | Updated an hour ago

Ohhh!! 😍 How beautiful! Love the blue and sparkle in this polish @RGbrown! 💙✨💫 Is this beauty part of the China Glaze Sesame Street collection?

Thanks so much, and yup, Sesame Street 💙

Pretty basic b of me, but I thought I’d pick something other than black for spring lol 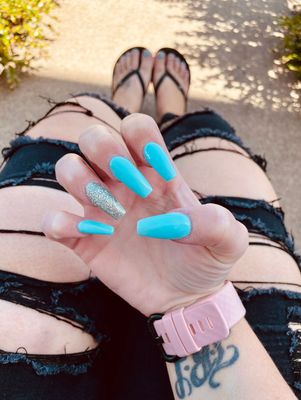 @kaseylemonz, great mani - the pop of sparkle and bright blue are perfect for spring and make a beautiful pairing with a black outfit! 😍

Ahhhh, I wouldn't call that basic at all! Screaming bright blue + sparkle is always a fantastic combo! 💙

@CookieGirl1 sorry for the month late response lol! it’s actually from dollar general’s makeup line, believe! i think this shade is blue lagoon but i’m not positive. i ended up buying every color nail polish they had. they’re like $2-$4 each. literally cannot beat it!

Courtesy of @itsfi's wondering out loud, here are some test stamps with OPI Visions of Georgia. I have to say, I'm surprised and impressed! The purple really comes out over everything that isn't white 💜 Expect this to feature in a mani soon 😍 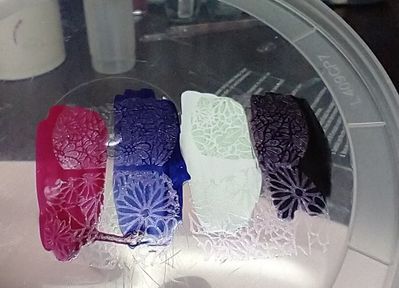 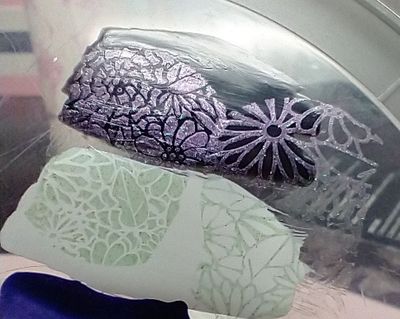 Close up over black and white. It stays purple over the black (with the exception of a few green flakies sparkling in the light) no matter what angle, but over white it shifts from green to purple as I move it around. It's subtle over white, but still noticeable. 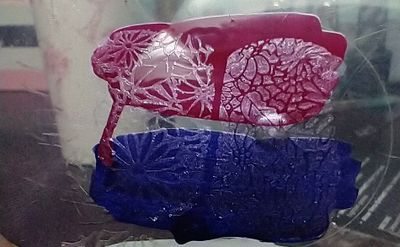 Close up over hot pink and a blue-leaning purple; of the four, I think it's most subtle over the blurple, which isn't terribly unexpected, but even there, it still gives off a lovely shimmer, almost a "hidden secret" surprise 💜

Woah!!! 🤩🤩🤩 Those turned out really well @RGbrown! 😍 It’s awesome how the OPI Visions of Georgia polish creates different looks depending on the base color, especially with the difference between the black and white polishes. ♥️ Very cool! 😎 Love the “hidden secret” effect with that blurple polish! 💙💜

I'm starting to get a vision of a black and white striped mani with this stamped over it 😍 After the rainbow series, of course!

That is one stunning vision you’re having @RGbrown! 🖤🤍🖤🤍 That would make for a gorgeous manicure! 😍 And would highlight the beauty of the OPI polish! Excited!! 🥰

@CookieGirl1, the sparkly blue is so pretty!

😍What a fun and sparkly blue shade! Looks like shimmery flakies? Love!!!

20% off all polishes (stamping and regular) at What's Up Beauty (formerly What's Up Nails) this weekend! They've got a nice selection of indie brands that don't go on sale often, so this might be a good time to take a gander 💸 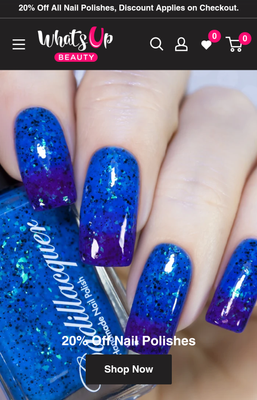 Okay, I guess it wouldn't hurt to look, right @RGbrown?! 😜 Says the gal who may have gone a little overboard with a couple of polish hauls this week. 🤣 My break from PPU has come to an end. 😉 In a glorious way! 😂