Start a Conversation
Add a Photo
Turn on suggestions
Auto-suggest helps you quickly narrow down your search results by suggesting possible matches as you type.
Showing results for
Search instead for
Did you mean:
Post in Insiders
Posted 05-29-2016 | Updated 2 weeks ago

I'm developing a love for brushes of all kinds.  I bought a few higher end brushes and they are amazing.  They are incredibly soft and my makeup glides on like a dream.  There are so many interesting shapes. I am really interested in creating a beautiful brush collection.  Show your brushes and share any cleaning and storage tips and let us know which ones are your favorites. 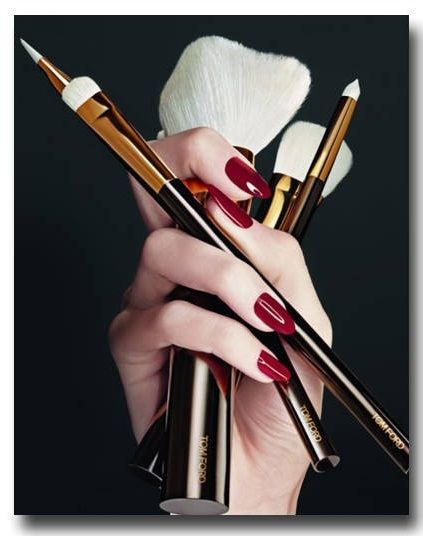 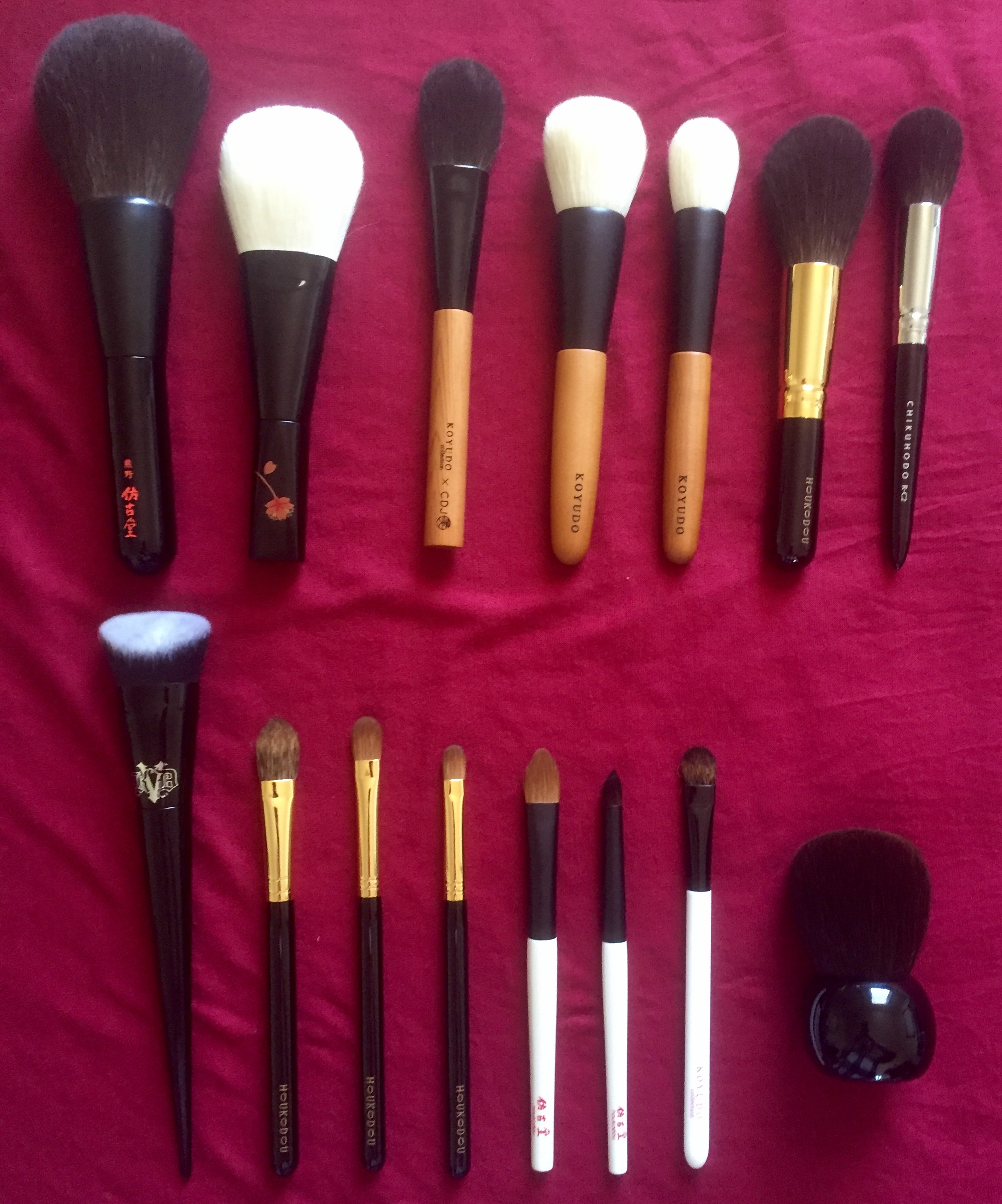 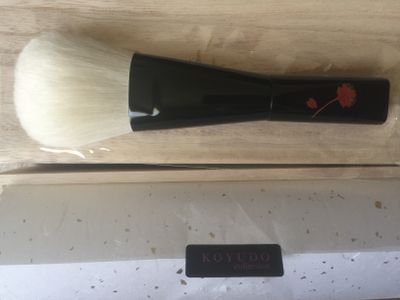 Wow, the Houkodou finishing is a beast, even next to the Saibikoho powder.

I'm been debating whether I wanted it vs just sticking with my P8, but now I'm not so sure... 😮

@Mochapj Has your P-8 come in already? I've been trying to patiently wait for it to come back in stock but to no avail. If you're contemplating owning them both definitely do it. The more the merrier 😄 If you only want one, I would probably say stick with the P-8. They're both huge but the handle on the P-8 is gorgeous!

Every week or so I get an email from Toshiya saying he's still pushing them to get it faster.  I agree; the Houkodou looks gigantic, but the P8 handle does look nicer.  I wish the Houkodou would have a makie handle.

Last week his email also asked me if I wanted something else instead of the Momiji because the handle would take a long time.  I told him I'd keep waiting for it, LOL, even though it's already been about 6 weeks.

Did you manage to snag one?

@Mochapj Sorry for replying so late. I don't get notifications of when someone tags me so I just have to watch out. I did manage to get one but I almost missed it. I had decided to "sleep" on my decision and I woke up at 6am to find 2 left in stock. Needless to say I didn't need anymore thinking and I jumped on it. I popped into this thread to unveil it. had to share it with people who would appreciate the beauty! Did you get one? I was shocked to see them sell out as fast as they did.

I happened to be up around 3am when I first got their email and I debated, but then when I woke up again around 5 I decided to get one.

Mostly because the price was significantly lower than what Toshiya had quoted me for the same brush individually.  I have to imagine they didn't have too many - I feel like when I first went on at 3am it said less than 20.

Mine is still in transit, but I'm hopeful it will be here tomorrow or Thursday 🙂

@Mochapj There were only 5 available in total. The price of the brush was almost half of what I have seen Toshiya post. I was pretty amazed by this and had to double check and see if the brush was the same brush. However, the dimensions seemed to be right and everything checked out. It was too good of a deal too pass up, but still I did not think they would be gone in about 6 hours. Share pictures when it arrives. It's really a beauty and it is so soft. I compared it to the Yakasugi Saibikoho blush brush and the Echizen Saibikoho powder brush is a bit softer. I'm so happy that by some miracle I woke up before it sold out. I normally sleep in if I'm not working.

I know!  I also checked the measurements and even went back to a photo he'd emailed me to double check, but it seems to be the same brush.

I noticed a few re-releases had shown up last night and I thought I was going crazy, because I was sure I hadn't seen them on CDJ before.

I picked up the Yakasugi with my Saibikoho Echizen, but I've been looking at the Wajima for a few months now.  I keep debating ordering it from Toshiya because I want a specific color.  I was also considering the black Makie cherry blossom, since it would match the black blush version I have in red squirrel.

Coincidentally, I ordered the black Momiji from Toshiya a few months ago, but it is still being made :S  If I'd known CDJ would carry it, I probably would've bought it from them instead.

@Mochapj Make sure to share all your new fluffies when they arrive! Which is hopefully soon :(. Sorry to hear about such a long delay on two of your brushes. At least now if you decide to order the momiji black it will be available on CDJapan. I remember eyeing all the Makie brushes when I first started accumulating brushes but then they went out of print for a while. I was really shocked and happy to see them available again. Hopefully CDJapan will have a 20% off soon and then all the brushes will be a bargain. They we can get all the brushes and feel less crazy about doing so 😄

@Mochapj Also, are you eyeing any of the new or rereleased brushes available on CDJapan? I'm planning to get the Koyudo x CDJapan Yakasugi Face brush to match with the blush brush. Also the Wajima Handle Kinoko brush, the Makie cherry blossom red powder brush, and the Makie momiji green moss powder brush. So many beauties out lately!

I purchased My first Chikuhodo brush (MK-1 brush), I received it today, but it has some awful glue kind of smell, do u guys wash your brushes? before use? is the smell common?

I have the MK2 and it doesn't have a smell at all.

Have you tried washing it to see if the smell goes away?

If it was a goat brush, I'd say smell could be possible, but I've never noticed much of a scent on squirrel brushes.

I called Beautylish, they told me to wash and if it still there, I can return, hopefully it go away when I wash

I have found the PERFECT makeup brush cleaner. I have seen how people love to use coconut oil or some other oil to clean their brushes, so I tried that. It was awful and time consuming. Also, the oil would not wash off and I had to shampoo them.

So the other day, I pulled out the beautyblender cleansing liquid and I spied the Clinique Take the Day off Balm. Immediately, I was inspired. This balm is used to take off makeup. It is an oil that emulsifies in water and washes off completely. So I took 2 tablespoons of the balm and put it on a plate. I would rub each brush in a little bit of balm and put it aside. It took me total 10 minutes to wash some 30+ brushes! They all came out amazing. I use the balm for facial massage and when I am too tired to go through whole remove makeup, cleansing etc ritual. Try it and let me know!

Cd Japan is having a 20% off sale on select Koyudo brushes, FYI

@Mochapj If only they would hurry and do a 20% off on the rest of the brushes as well. We could all go on a frenzy buying everything. The sale on the sets was tempting though

I know what you mean @Cahlee!

Ok finally got to play with my new Wayne Goss brush and it's shedding a little - is that normal? This is my first blue squirrel brush (I have goat and synthetic) so I'm not sure. Out of fear since it's LE I purchased another one as backup - it's such a lovely brush *squeee*

How do u all clean your natural hair brushes? what do use to clean? any tips? how u guys maintain brushes?