Start a Conversation
Add a Photo
Turn on suggestions
Auto-suggest helps you quickly narrow down your search results by suggesting possible matches as you type.
Showing results for
Search instead for
Did you mean:
Post in Fragrance Fans
Posted 10-05-2021 | Updated Wednesday

Do you have a box full of perfume vials and/or a vanity covered in perfume bottles? Are you the Goldilocks of perfume, just looking for the perfect signature scent? Do you want an opportunity to post daily about how your perfume of the day smells oaky and smoky with hints of blackberry and currant, like a cigar in a whisky barrel rolling through a Mediterranean orchard on a breezy summer morning?

If you answered yes to any of the above, or you just want to hop on board for the ride, join us for a 31 days of perfume challenge starting January 1st! Some of us from the 25 days of lipstick challenge wanted to continue the fun and exploration, and since many of us have so many perfume samples, we thought this challenge would be perfect. If you don't have 31 perfumes or hate everything that doesn't smell like Meyer lemons and fresh goat cream, that's fine--we're just aiming to use the neglected perfumes we have laying around and incorporate them into our perfume rotations.

And if you want more perfume vials, there's no better time than now to take a peek at Sephora's samples section.

Edit: Anyone can join in at anytime! We're here to support, live vicariously through, and encourage everyone in their olfactory adventures!

Thanks for the suggestion, @Margalee!  I wasn't that impressed with My Way, but if I have the opportunity to test drive the intense version, I will give it a try.

I have Acqua di Gioia--it's one of my favorites!  I didn't pick up a water feel.  I'll keep that in mind for the next time I wear it.  😁

So yesterday I wore Marc Jacobs Fragrances Daisy Eau So Intense Eau de Parfum 3.4 oz/ 100 mL Eau de Parfum Spray  After that wore off I sprayed on Pacifica Himalayan Berry Patchouli. I was so iffy on the Daisy Eau so Intense that I wore it again today. Mostly because it touted strawberries and yesterday I got straight up sparkling and never noticed any strawberries or pear in that sparkling. It's sort of like a champagne scent immediately and that top note lasts for quite awhile. The first twenty or thirty minutes it overwhelms the pear and strawberry. After that you get pear or honey poking out and strawberry too. When the dust settles it is a muted strawberry. Nothing like a full on strawberry. A little warm, a little sugary. Still some of the sparkle. This perfume lasts about three to four hours on me. Also I am not sure this is something that I would purchase a full size of. I'm not crazy about the sparkling part of the fruit. It truly hits your nose like the bubbles in champagne which is pretty neat but I don't prefer the scent. I think the novelty of the effect is better. After the sparkling half of the notes goes it is pretty lightweight. Not much projection. And while I really like the soft, grown up scent that remains it doesn't wow me as a perfume. I think what's left would be really great as a body butter. Maybe that is the key to Daisy intense is to layer it. As for the Pacifica body and hair spray, It is strongly patchouli. Your typical incense yoga shop 1970's style. The berry is there but the patchouli outlasts it. I do love patchouli and I do love that this doesn't set off allergies and has long? far? projection but can still be sprayed in my hair without it overwhelming me.

@Margalee If you want a strawberry one, I seem to recall Etat Libre's Les Fleurs du Dechet having an easy strawberry character. But I can't recall if that lasts long into the drydown.

Today I am wearing Valentino Donna Born in Roma Yellow Dream. I think of it as a "grown up" Jean Nate. To me it's creamy bright lemon with soft powdery undertones. It does last for hours too.

Today I am wearing SDJ Cheirosa '71. It pairs well with Tree Hut Tropic Glow butter. It is warm and sweet and a bit dusty smelling. One review said it smelled like Alfajores cookies. I think it does have a cookie smell. Really wish they would make a butter of this one.

@txcatx Hi! Yesterday I wore Valentino Donna Born In Roma Eau de Parfum . It smelled soft and powdery (but not too much!) off a paper flyer so I was really considering a purchase until I realized I had a small sample from a sampler box and wore it. It wasn't quite as warm and fuzzy. It had a fresh note stuck in that must have faded in the paper swatch. I think I'll be skipping it for now. Today I am wearing Lolita Lempicka Premiere. It is light and airy plus a tad licorice. Like a little field flower in spring.

Oh wow, love that this challenge is still going. I already mentioned this elsewhere, but when I saw someone post that Le Labo came out with a new matcha fragrance, I immediately decided to go to the Le Labo store during my lunch break that same day. Tea notes and fig notes are two of my favorites, so I had to try this out ASAP.

Unfortunately, it was hard to get initial impressions with a mask on in the store, but I was a little sad when I went outside and realized that my wrist smelled like soap with a hint of fig leaf. I remember it as soft and delicate, like green tea, but it also reminded me a bit of soft, powdery florals. I just wished that on me, it would have smelled more like tea.

I sprayed the other tea fragrance, Thé Noir, on my other wrist, and this scent lasted at least 12 hours, the matcha one faded much faster and was barely detectable after 4-5 hours. Thé Noir reminds me of drinking Earl Grey tea by a fireplace, and I've always wanted to pick up a bottle. But, when it comes to tea scents, Atelier Cologne's Philtre Ceylon still has my heart, since it always transports me to drinking sweet mint tea in the labyrinth of Fez's medina.

Hi, @txcatx !  I saw your post on the other thread.  It's too bad that Le Labo Matcha didn't smell so hot.  Thanks for letting us know!  I will add Atelier Cologne Philtre Ceylon and Le Labo The Noir to my list of scents to try.  I haven't heard of either, but both sound good.  Not to mention AC is one of my favorites!  Stop by sometime--it's not the same without you!  🥰

Thanks, @Titian06 ! I stop by every now and then, mainly to check on current promo codes, but I realized I do miss this place! I tend to keep up with the old gang on Instagram.

I've also been wanting to try AC's oolong fragrance, and I really wish Sephora carried it so I could test it out! Guess I'll have to order the discovery sample set from AC's direct site.

@txcatx It has been really weird testing some fragrances while wearing a mask! 😷 But I think it's still good enough to know if you'd be interested in a full bottle. Especially if you spray on your skin and let it dry down.

I'm sorry this one didn't work out, tea is a dificult scent to capture! 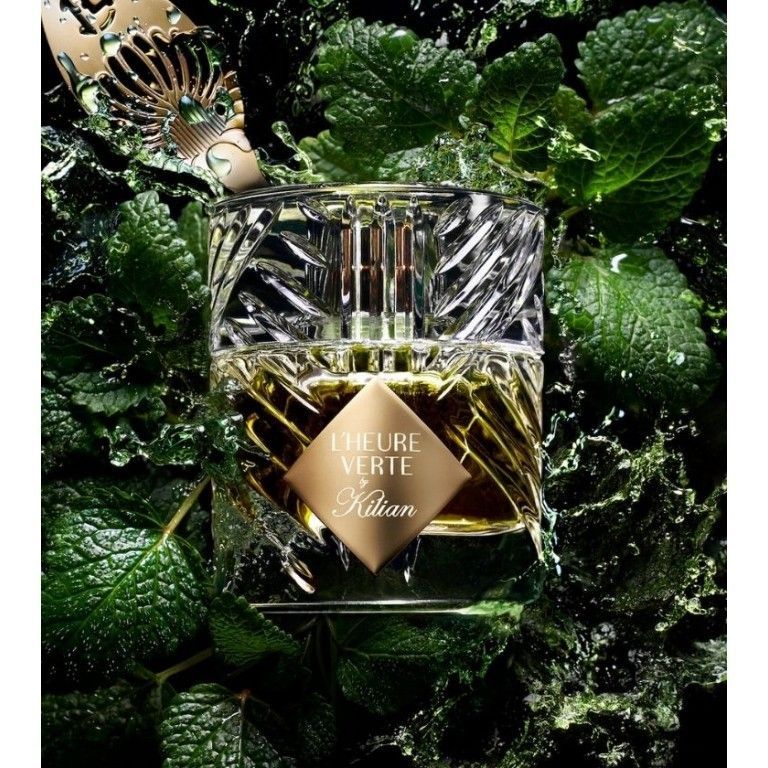 Testing KILIAN Paris L'Heure Verte Eau de Parfum 1.7 oz/ 50 mL Eau de Parfum Spray on my skin today. This is very much true to its notes pyramid, an absinthe scent that opens with a hit of anise that's so cool, there's an impression of mint. It's not bracing though and not at all sharp-edged like some greens can be. This a Kilian so it's smoothed out and sweet but it's not nearly as sweet as something like Angel's Share, which should prove to be more popular, and very much in my personal range of tolerance. There's even a little creaminess which offsets the anise well. Woods and patchouli come out in the dry down, and I'm a little surprized the patchouli here is a bit in the whole chest hair vein, earthy and the barest suggestion of BO. I know that might sound unpleasant but it's hardly a thing, think of it like an anchovy blitzed into your cesar salad dressing. Or imagine the patchouli in Angel and then tone it way, way down. If we are to think of this traditionally, it is a "masculine" scent even though it's marketed as unisex. Of course, absolutely a woman could wear this too. Worth trying if you are looking for an absinthe scent.

Thank you @pocketvenus and @eshoe for tagging me in this below! The cool, minty notes that eventually bring out the woods and patchouli didn’t sound like it would be described as a sweet scent 🤔 so intriguing how this one plays out!

Oh no, @Guessgal! This wasn’t even on my radar and now I feel compelled to hunt it down. I hope you are able to as well!

@eshoe @Guessgal It's funny how you want to obtain something the more the moment it becomes more difficult to obtain! I believe it's still available at Holts 🙂

@pocketvenus Ooh minus the minty part this sounds amazing!

@Samtian I like a nice mint note in a fragrance 🙂 Here, it's definitely more the cooling feeling of mint rather than mint itself - oit's more about a cool, mentholated vibe. I'm guessing the leaves in the photo are patchouli?

@pocketvenus I’ve never thought of absinthe as something to wear. I love the scent itself (well, if Pernod counts) and herbaceous blends in general. This seems worth hunting down, to try, at least @Guessgal

@eshoe If you try it, I'd love to hear your thoughts 🙂

I will certainly let you know if I do, @pocketvenus!

@eshoe Your descriptions are fantastic! I need to take a class from you. I will make a trip to Sephora to smell this for my man and myself. Those bottles are a bonus. So cute! Thank you for your review.