Start a Conversation
Add a Photo
Turn on suggestions
Auto-suggest helps you quickly narrow down your search results by suggesting possible matches as you type.
Showing results for
Search instead for
Did you mean:
Post in Everything Eyes
Posted 09-04-2014 | Updated 09-05-2014

Someone posted this news story on my facebook wall yesterday because I'm kinda known for being makeup obsessed, especially eyeshadows... I replied: "Wish she'd stolen some blending brushes too tho, her color lines are HARSH!"

Guess we're all obsessed with makeup here, but can all feel a bit better knowing we're hopefully not THIS obsessed! 😄 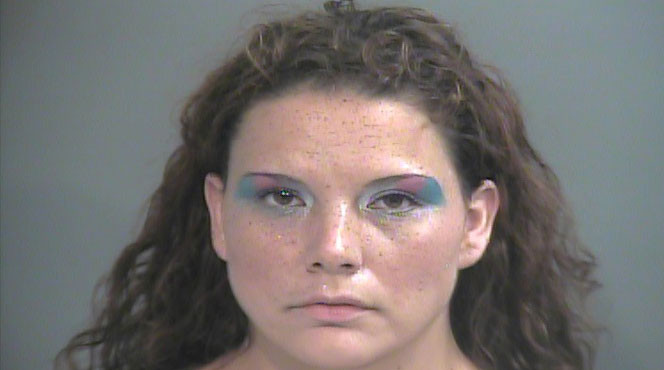 An Arkansas woman was arrested on suspicion of stealing $144 worth of eye shadow, police said.

According to KFSM, Brandy Allen, 31, of Fayetteville, Ark., faces charges of shoplifting and disorderly conduct.

On Monday, police were called to an Ulta Beauty Store to deal with a shoplifter, according to a preliminary report.

The person who called police said she saw Allen grabbing handfuls of make-up without looking at the color or labels, the report said.

After an officer arrived at the store and approached Allen, the original caller introduced herself to Allen as the general manager of the store and asked to see the contents of her purse, the report states.

Allen fumbled through her purse for several minutes before taking out several different packages of eye shadow. According to the report, she started cursing very loudly saying, “No one [expletive] saw me steal anything.”

She also described the situation with two more expletives, the report said.

The officer took Allen into custody, and the report states that the approximate value of the stolen makeup was $144.

Allen’s bond was set at $830, and on the same day she was booked, she bonded out of the Washington County Detention Center, according to the jail’s intake report.

She got picked up before she got to that section....

Yeah, she should have at least picked up a gloss.

And at least a whisper of some eyeliner, sheesh

Haha it's funny to me how little the value of the stolen make up was? Make up adds up fast especially if shes piling them in her purse!

lol, she MUST have been in the drugstore brand sections!

I was totally thinking that too! It must have been high end drug store cosmetics that were stolen. 😉

HAHAHA YES! I thought that too! I was like... "She must not have gotten much? Unless she was in the Maybelline aisle..."

Being Ulta, hard to know if she was getting the good stuff or the drug store stuff. 😉

Wish they'd taken a pic of her haul! 😄

That would make an amazing youtube haul video LOL

Maybe she stole $144 and applied it all which is why we are seeing that wonderful display on her lids.

So glad I decided not to do that same eye shadow today.  That would have been awkward!  I bet she was the glittery-est girl in that jail!

Lol, we could have a who wore it better thread!

Perhaps she was on her way to a bad 80's themed costume party?

Goodness - I didn't see this! Maybe she should have stolen a book giving application advise instead?

My friend posted this on her page too...tsk tsk tsk...

tbh I'm mostly offended at her lack of blending. 😛

oh, so that's what those lines above the eyeshadow were...

Conversation Stats
Photos6
Are you sure you want to uncurate this?
Cancel OK
testing