Start a Conversation
Add a Photo
Turn on suggestions
Auto-suggest helps you quickly narrow down your search results by suggesting possible matches as you type.
Showing results for
Search instead for
Did you mean:
Post in Besides Beauty
Posted 08-11-2021 | Updated 03-16-2022

With Halloween almost here, what scares you? Or do you have a phobia? Have you done or attempted anything to overcome your fear?

I have bathmophobia (fear of stairs). I have no problem at the bottom but looking down from the top is another story. Also related is escalaphobia (fear of escalators) which is even worse because it's moving stairs. I don't know where this fear came from but I read that if you have some weird fear (my mom is terrified of being buried alive), it's because that's how you died in a past life.

@Ispend2much6  That doesn’t look like any house cat I’ve seen. Look at the chomps on him!!!  And he’s so solid!

@lol true.  He had really long whiskers too.  He was not afraid of us at all; just very curious.

On a lighter note, I saw the prettiest young deer when I was leaving our neighborhood last week.  I tried to take their picture but they were too quick.  I saw the first flock of geese flying today too.  I think fall might be early this year.  I feel like a pioneer reading all of these nature signs.

@Ispend2much6   I LOVE seeing deer!!!   Too bad yours were skittish and camera shy but I still consider seeing them good luck:)  I hope they made your day as much as they make mine everytime without fail:)  This guy had not a care in the world- not even the cars phased him.

We’re so lucky to get to see nature on the daily.  It makes me never want to live in a big city.  Walking outside and running into a bear happened a month ago.  I didn’t like that so much but it was still cool and thrilled me once I was back in the house.  He didn’t care I existed either which I appreciated. 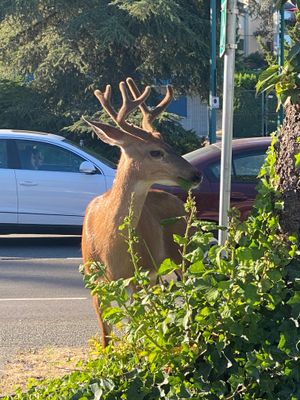 @heartsmyface  That deer is very chill!  So handsome.

I agree; we live in the country and I had those same thoughts recently, that I much prefer living here than in a congested area.  It's just so pretty with all of the trees, fields, bodies of water...we have it all, except for mountains. 🙂

We  actually had a few bear sightings last year.  Several years ago a juvenile climbed out of the river across the street; our neighbor thought it was a person at first!  Glad I didn't witness that.

Do you have luna moths?  My son found one lying on the road one late afternoon- look at how huge they are!  He brought it into our screened porch to rest, and it went straight to my basil.He looks like he's swimming in it!

It amazes me that once they are adults they don't eat; they just procreate and then they're done. 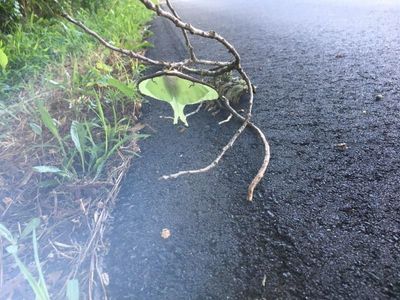 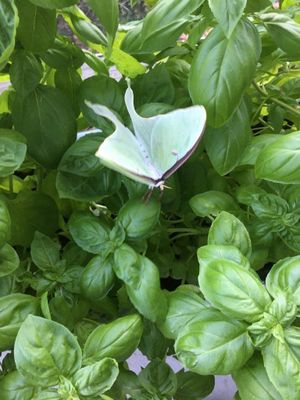 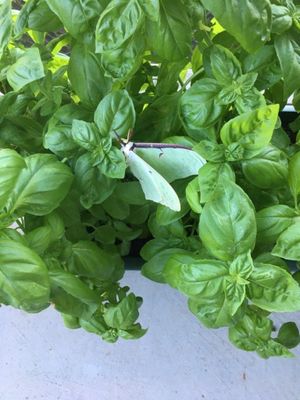 @Ispend2much6  oh what a cool find!!!!  I’ve never seen those before!  How neat they blend into the foliage.  I’ll have to show him in the morning!  I do think he’d like the photos!

There is something seriously icky and wrong about them. One time one got cut in half in my throwing, and then there were two moving around. Noooo no no no @Ispend2much6

@Weetart That is a huge no!

@Weetart same!!!! I hate thunderstorms!! Have you ever seen a huge grub?? I seen one for the first time about two years ago,,, freakiest thing I've ever seen

@lmaster  Ick! Yes, I have. I was visiting somewhere at some point. Ugly suckers. And good thing for those birds! Here all I see are Robins finding worms in the grass. The view of the farmers field behind us is covered with a thicket of trees so I don’t know what’s going on down there.

@Weetart it's a no go for any bugs lol the only thing I can handle are those spiders with very skinny legs and tiny bodies, I call them sketti spiders 🤣 I think they are cellar spiders or something

I am so with you on the bug thing @lmaster . Legit once barricaded myself in a room for several hours until my roommate came back for what ended up being a moth

It's not uncommon for skink lizards to get in our house (gross!)  When we first moved to our current location, I wasn't used to that (although I used to hunt lizards when I was little.)

I flipped out when one  made it inside.  For some reason, I thought I could stun it with Windex, and when that didn't work, I sprayed Raid all over the house!  They have survived thousands of years of adverse conditions, so a little spray wasn't going to bother them!

I ended up having to capture it with an upside down bucket and scooch it out of the house. 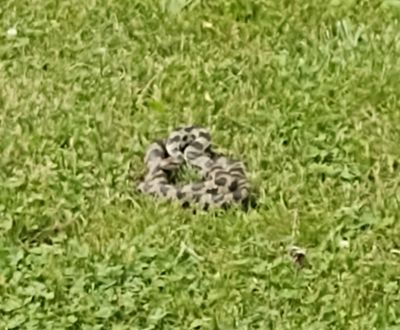 this was in our yard a couple months ago,,, he touched it,,, I'm pretty sure it's a timber rattlesnake. He has no fear, he's picked up non venomous snakes and has been bitten,,, still doesn't phase him,,, I try and try explaining to him, guess Coyote Peterson isn't the best role model for county kids 🤦

@lmasterOh, that is grounds for fainting!!!  You really have to keep your eyes open.  Your son is brave.

We have canebrake rattlesnakes, and copperhead and cottonmouth snakes.  The rattlesnakes keep away from humans, and are pretty much in the woods alone.

The copperheads, however, like our yard.  They like hanging out in azaela bushes , wintering under stuff that is left in the yard, and my favorite- laying eggs under plastic mulch in gardens, only to pop up when you plant flowers in the spring.  I thought they were fat worms, until they coiled...never got bit though.

When I was pregnant we were part of a baptism ceremony in the river across from us.  A cottonmouth coiled right up next to us!  It's where they live, and they are aggressive. It finally left without biting anyone.  I never went back into the river, that's for sure.

Ok @Ispend2much6 you win!! You win!! Yeah,,,I would probably have a breakdown if I seen those snakes!!!

@Ispend2much6 @Oh my gosh!!!  When we were inSt Barths I was laying on the hotel bed and a lizard crawled across the wall!  I took out my camera and did a photoshoot cause I thought he was so cool and that my husband would never believe me!  Little did I know there were hundreds of them just outside.

Looking up ‘skink lizard’.  Edit- I’m back and am a bit horrified at the shape of them.

@heartsmyfaceI have the chills now.  Anything near my bed is evil.  I've had spiders drop on me from the ceiling, which was bad enough. But lizards on the wall?  Nope.

Skinks supposedly were around during dinosaur days.  They are truly acrobatic- they can flatten their bodies to fit under a slat of siding.  Why they would want to do that, I don't know.   Wait- they're not living in our walls do you think????

@Ispend2much6   Ceiling spiders 😭😭😭.  If there’s a spider on a ceiling I will bolt.  I do not like free range spiders and especially ones that are moving and above me.  I just had to look up to be sure I was safe.
ahape shifting lizards though.  Is that to hide or to get it’s prey?
lol, so do you really want to go there?  Cause I heard first hand what’s in the walls from a home demo guy and maybe you don’t want to know- mind you I like to tel myself there’s a reason people are demolishing those homes.

@Kim888 hey lol those things are lethal too!! They will eat your clothes!! 😆

@lmaster. They are pretty ugly. If you see a flock of birds in your yard in the spring, pecking away at the ground, that's their meal. At leastbthey're good for something!

2 Replies
Conversation Stats
Photos14
Are you sure you want to uncurate this?
Cancel OK
testing