Start a Conversation
Add a Photo
Turn on suggestions
Auto-suggest helps you quickly narrow down your search results by suggesting possible matches as you type.
Showing results for
Search instead for
Did you mean:
Post in Besides Beauty
Posted 10-27-2021 | Updated yesterday

What's on your plate?

Hello there, ladies and gents!

Keeping in line with all the fun and interactive threads asking about your most recent halls, items you have your eyes on, what you're currently wearing, what's your hair routine, and more, I've decide to branch out and ask:

The beauty world doesn't just stop at skin care and cosmetics, it also goes hand in hand with your overall health and well-being, so with that, I'm curious to see what we're all chowing down and snacking on be it for breakfast, lunch, dinner, dessert, or inbetween!

For those with apps that help count calories or to those who just want to keep a log, here's a place to share, possibly find and share some recipes, and even tips on maintaining a balanced diet.

Don't just share food items, but even drinks! I'm a huge fan of tea and at least have a cup of green tea a day (anti-oxidants) and drink plenty of water.

For lunch today, I had:

-Gai lan (it's a type of Chinese vegetable/greens)

Now, tell me, Beauty Talk world, what do you have? 😄

@BigMick  That looks yummy, healthy, and artful!  Did you bake the salmon with the lemon slices on top?  I've always wondered how that would turn out.

@BigMick,that looks yummy! 😋 Good for you on your water goals. 🚰 A gallon is impressive.

That does look good @BigMick

Moving on from apple cakes to apple pie (filling.) The picture is three batches of filling from recipe below.

I used 10 pounds or a little more of apples (four of those white plastic bags from the grocery store that look like they came from a farmer's market,) and this batch should make 6 or so pies.

lemon juice to sprinkle on apples once cut (I didn't measure)

1- 2/3 cups sugar (White will do, but I used turbinado. A mix of white and brown would also work.)

A couple of shakes of nutmeg

Peel, slice, cut, however you like your apples processed, and mix with lemon juice.  Let set while you start the filling.

Mix the cornstarch, sugar, salt, cinnamon, and nutmeg in a large dutch oven or saute pan.

Bring to a boil, stirring frequently.

It may clump up with some darker bits from the cinnamon coagulating with the cornstarch, but once you add the apples it will even out.

Add apples, stir until combined, cook for 2 minutes, then turn heat off and let set until the apples are a little softer. 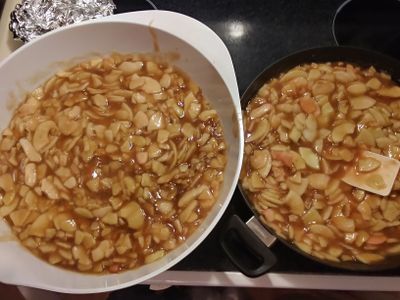 @itsfi  I think so; I was so excited to find a variety of NY apples at a local grocery store.  They're getting harder to find.  Now we have enough filling in the freezer to have on hand for special occasions.

What kind is your favorite apple @Ispend2much6 ? I like Honeycrisp and Fuji. Honeyscrisp is always expensive in my area.

@blackkitty2014   Those two types do tend to be more expensive as they're available all year round here; I think they may even come from New Zealand in the winter!

If you have an Aldi, sometimes they have great deals on bags of organic apples, and regular ones.

For this pie, I used Macintosh, Macoun, Cortland, and Empire.

Macintoshes taste really good fresh, but they lose their flavor quickly and turn mushy when cooking.  I used them for an apple cake I make, but prefer granny smith in it.

I think granny smith would work well in pies too, as they're kind of tart and easy to find.  I tend to think tart types of fruits work well for baking, because of all of the sugar that is added to the recipes!

If apples lose some of their flavor and tartness, I add some or extra lemon juice, and sometimes citric acid.  That's a trick I learned from making homemade jam.

Which reminds me, I'd better get some raspberries before they're gone for the year.

I have one of those apple peeling and slicing gizmos, and they're really nice for processing apples and potatoes, if you use those alot.  I have never regretted using it, as you can adjust it to peel potatoes without slicing.  For my family, I need to use a 5 lb bag to make mashed potatoes!  And yet they are thin...good for them.  Plus, leftovers.

I need to try this @Ispend2much6 . I plan to make carrot cake cupcakes with Halloween decorations. Hopefully I’m not lazy

@blackkitty2014  Yum- carrot cake is so good!  I hope you'll post pictures.  I've never been a good decorator; I can throw icing and sprinkles on though. 😂

This was from last weekend - wonton noodles soup.

I usually cook very simple stuff during the week but the weekends, I tend to make dishes that require more time/steps/etc 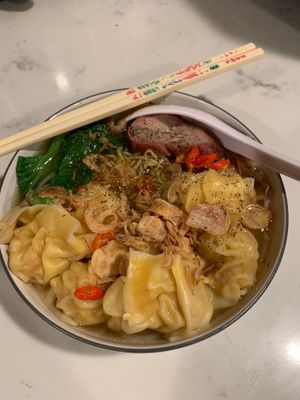 This looks so delicious!  I applaud your effort to make this soup!  We would all like to come to dinner!

@AznAngelLiz This looks so yummy.  Love wonton noodle soup with the yellow noodles.  Brings back so many childhood memories.

I love the egg noodles too @SportyGirly125, makes it more authentic IMO

Wow this looks delicious, @AznAngelLiz! I have never attempted something like this, looks like it took hours. Beautiful!

Thanks @eshoe. The most time consuming was the broth because it's supposed to simmer for hours. I made the wontons and prepped the noodles while the broth was simmering away.

Well I am going to have to try making some, @AznAngelLiz. I make egg rolls once in awhile but I always use store-bought wrappers. I gotta think getting the right consistency (rolling them out) would be key.

Thanks @blackkitty2014 It was definitely time consuming but I'm extra and the family seemed to enjoy it.