Start a Conversation
Add a Photo
Turn on suggestions
Auto-suggest helps you quickly narrow down your search results by suggesting possible matches as you type.
Showing results for
Search instead for
Did you mean:
Post in Besides Beauty
Posted 03-19-2020 | Updated 09-18-2022

I will! Thank you, @CookieGirl1!

I will! Thank you, @CookieGirl1!
2
Reply

@curlychiquita, Thanks for bringing perspective to everyo...

@curlychiquita, Thanks for bringing perspective to everyone's world. Sounds like you have done a fabulous job of keeping your son safe, keep it up❣
7
Reply
1 Reply

Thanks, @Luvstravel! 💓 It's actually a lot less dramatic...

Thanks, @Luvstravel! 💓 It's actually a lot less dramatic living it than it sounds talking about it (well, except the first two months). The last visit was the most stressed out I've ever seen his doctors, and we've been going there a long time.
6
Reply

You have so much care for others @curlychiquita. Hopefully the rest of us appreciate what you've had to handle the past 7 years.

That's really sweet of you, @ShortErica. I really appreci...

That's really sweet of you, @ShortErica. I really appreciate how much we support one another during difficult times. 💖
10
Reply

My sister works for Humana and received this chart. Thought I would share. 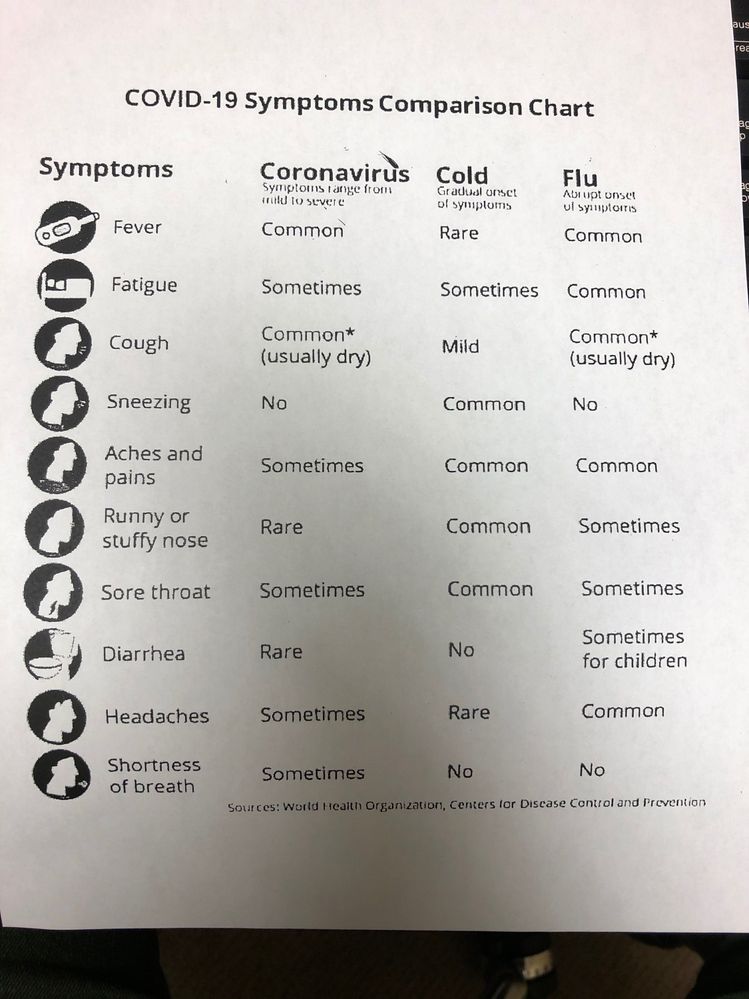 @sprocketta I got a cold about a week ago combined with the ol’ seasonal allergy pick up... and I’ve been referring to these sorts of charts at least once a day because I’m paranoid. I’ve never had a fever or a cough, but I keep having to reminding myself my running nose and sneezing are NOT symptoms 😅

@alexasteph - I'm right there with you!  My allergies picked up last week just as the pandemic hit my state.  I'm glad I saw that chart online earlier in the week.

@alexasteph Sounds like me in February! I had a gnarly sinus infection and then lots of resulting post-nasal drip a couple of weeks ago (with the delightful cough to go with it!) and I spent the entire time second-guessing if I was positive! Never mind that my sinus issues happen EVERY YEAR like clockwork and I know exactly what it feels like, this whole COVID-19 has everyone on edge.

@faeriegirl Haha, thanks. I’m fine though. With the allergies and my job, my nose is pretty much always running and I get a cold like 4 times a year so I’m used to it!

Better to look and check @alexasteph I appreciate everyone who is sick with anything that is taking precautions just in case.

Thank you for posting the chart @sprocketta . I do not feel comfortable sharing my experiences with the pandemic but if I did post it most BIC would be shocked. Everyone take care and we will get through these tough times.

RE: Health and Sanity Check-Ins

Hello from Kentucky. We have two confirmed cases in my town and I think 34 or so in the state. There have been two deaths. I work in retail and we are still open although we have a few people out. One of them got sick at work and they had to call an ambulance to come get her. All they did was give her a mask and told her to quarantine herself for two weeks. Nobody tested her. So we’ve been exposed to who knows what. What makes me angry is that our corporate offices are working at home, yet we’re out here working with the public. They’re not even sure we’re making enough to cover payroll since the store barely has customers. I suppose I should feel grateful to still be working, especially since the restaurant where my husband works has shortened their hours so his shift has been totally cut out, meaning we have less money coming in, meaning we won’t have enough money to pay all of the bills next month. We were already financially challenged so this couldn’t have come at a worse time. My daughter has also been affected. The job she was leaving shut down and the new job she was scheduled to start shut down. So she’s trying to figure out how she’s gonna pay her bills. I’m ready for all of this to be over.
23
Reply
8 Replies

Wow, I'm surprised that you work in retail and you haven't had to close down, @divaknits.  Where do you work?  I hope that you stay healthy and well and that you and your family are able to be ok financially; this must be such a stressful time for you :(.

@divaknits Yes, I worry how we can all self quarantine when not everyone is in a position to do so. What about the grocery store workers and the delivery men and women?  They have to keep showing up to work so the rest of us can self quarantine. The sad part is I see this virus playing out along socioeconomic lines because as you mentioned. Corporate is teleworking and others are stuck out on the floor. We really need the government to intervene if that’s what they’re going to do. There can’t be this playing both sides of the fence business

3,354 Replies
Conversation Stats
Photos155
Are you sure you want to uncurate this?
Cancel OK
testing