Start a Conversation
Add a Photo
Turn on suggestions
Auto-suggest helps you quickly narrow down your search results by suggesting possible matches as you type.
Showing results for
Search instead for
Did you mean:
Post in Beauty Confidential
Posted 08-24-2022 | Updated 09-07-2022

Another month has gone by, and I'm sure it had its ups and downs for everyone.  So, if you had some beauty disappoints, disasters or were just plain underwhelmed, let us know all about it.  We don't live in a perfect world, so all our products can't be winners. 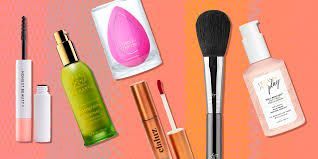 There was an influx of posts in a rosacea subreddit about the Tower 28 Beauty SOS Daily Rescue Facial Spray 4 oz/ 120 mL , and I bought into the hype. I forgot to patch test before spraying it all over...nope nope nope, not for me.

Not so much a miss, but more just falling out of favor… when I had a sample of Summer Fridays Light Aura Vitamin C + Peptide Eye Cream .5 oz/ 15 mL I really enjoyed it and purchased the full size. The first few times I used it, I found similar results to the sample. But then, I sorta stopped liking it after a while. Depending on how sensitive my eyes are that day, it seems to irritate them sometimes too. My FAB retinol eye cream is less irritating! The brightening effect is still really nice, and it plays well with my makeup and especially my under eye concealer, but I dunno, I’m not loving it so much anymore. Eye creams are the worst, I think I’ve tried more eye creams than any other type of product other than cleanser throughout the years.

@alexasteph I know that some people swear by eye creams and it's one of those things that I pretty much never use unless I've gotten a random sample or something.  I'm sorry that this one stopped working for you!

@alexasteph Sometimes I find that products can also fall out of favor (some way sooner than others). I had one particularly odd experience with a Hey Honey Propolis Scrub from ULTA. I got a free sample of it and loved it but when I purchased the full size and started using it the product began to burn/hurt my skin. So strange. Hope you are able to find "the one" in the eye cream department ❤️

I had a few more misses in August that I wanted to post about before I forgot.  One is IT Cosmetics Superhero Elastic Stretch Volumizing and Lengthening Mascara Super Black .  I'd seen it a bunch of times on QVC and the usual model they showcase it on does have her lashes look longer.  But, I felt like she had naturally long lashes AND I wanted more volume and hers looked sparse.  This was 50% off recently at Ulta so I gave in.  The results were what I suspected for years: slightly longer length, and that was about it.  I prefer more volume - way more volume.  I also wasn't a fan of the brush as I felt like it didn't grip onto the lashes enough.  It also had a scent, which I don't care for in mascara.

Since I was on a mascara binge, I happened to see Maybelline Lash Stiletto at Target.  Many, many years ago I had a friend recommend it.  Back then, it had a different brush but I wanted to give it a whirl as Maybelline is known for their mascara (at least, it used to be).  I couldn't get enough mascara to glom onto the wand, so I couldn't get enough product to apply.  Fail.

I bought Redken's All Soft Argan Oil as I've been searching for a new hair oil.  One thing that drew me to this product was the lack of scent.  Well, that was just in-store b/c at home there was definitely a scent that reminded me of baby powder - a scent that I detest.  It didn't linger like crazy, but it was unsettling to me.  Unfortunately, the texture was rather syrup-y and unpleasant to apply.  Finally, I didn't find the results to be remarkable.  I've been using Redken's Frizz Dismiss Oil in Serum recently and it's been adequate.  The All Soft will hopefully be returned this coming week.

Sara Happ The Lip Scrub was another disappointment.  I opened it and was immediately struck by how rock hard it was.  I had to dig some out with my fingernail.  This was strange, b/c it's been pretty warm so I figured this was about as soft as it was going to get.  I also had a lot of difficulty getting it to apply softly/evenly.  I finally gave up as I didn't want to damage my lips.  It didn't improve my lips at all, and if anything they were a little worse for wear.  I chose the Brown Sugar flavor which at first I enjoyed, but then came to regret as it reminded me way too much of maple syrup.  @RGbrown I thought you were a fan of this scrub.  Is this typical?

@greeneyedgirl107 Thanks for sharing your thoughts! The Sarah Happ lip scrub does not sound like a good experience at all, rock hard lip scrub? I think not. So sorry you ended up catching a dud, I've heard great things about this scrub over the years I wonder if it's a one-off situation (hopefully not a tragic reformulation).

@greeneyedgirl107 Hmm that's super interesting and could very well be a possibility.

Ugh, rock hard? I almost wonder if it got too hot and the sugar melted and then hardened. Mine have always been a pretty solid pot of sugar, but not hard, there's just enough oil/binder to keep it soft enough to be easy to get out. I'm sorry that one wasn't impressive! 😖

@RGbrown That's a very good theory - I bet you're right!

Thank you for sharing you thoughts on those, sorry they weren't for you @greeneyedgirl107

@greeneyedgirl107 Sorry things didn't work out for you! I recently got rid of the same Sara Happ Brown Sugar scrub, for different reasons. And that is definitely not typical!

@Samtian thanks for weighing in!!! 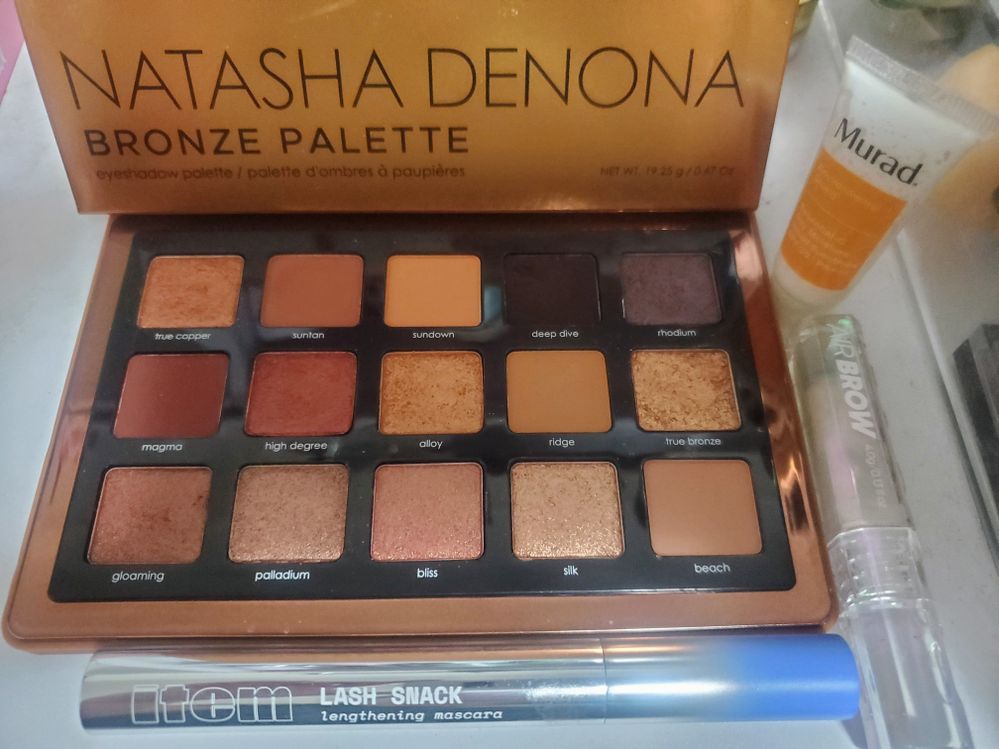 Dug out my Natasha Denona Bronze Eyeshadow Palette to use for some August late summer looks. I don't love ND shadows; they're just okay given the $. This palette is so aggrevating sometimes because a lot of the individual shimmer shades are pretty but they're all too similar. I know none of this is new but I used it again recently. I'm just glad I got this in a Beautylish Lucky Bag and didn't buy it outright.

I think the ITEM Beauty By Addison Rae Lash Snack Clean Lengthening Mascara Midnight Mood makes my lashes look pretty and the small wand makes getting my bottom lashes easy. But blah, if you have sensitive eyes beware. Any bit of watery eyes is an immediate cause of irritation. If my lashes touch my skin (which I'm blessed with pretty long lashes so this happens frequently) it's immediate irritation. At least I got this in a Sephoria box and didn't buy it.

The Murad Essential-C Day Moisture Broad Spectrum SPF 30 PA+++ is bad. It runs and if there is any sweat or water then it gets in the eyes and stings.

At first I liked the Kosas Air Brow Clear + Clean Lifting Treatment Eyebrow Gel with Lamination Effect 0.13 oz/ 4 g. But now this doesn't hold up the front part of my brows (a lot of thick hair), although it only did a passable job before. I've tried more, I've tried less, I've tried a different spoolie. It also now has a weird color and texture.

@haleyvvvv I feel like ND shadows are so hit or miss, most people I know either love them or hate them. I've been curious but thus far I've downright refused to purchase the palette at full price due to the mixed reviews. Have you (anyone else that happens to be reading this thread) tried the Viseart shadows (in particular the fully matte older palettes)? If so, how would you say the ND shadows compare to those?

@QueenMarceline @I had the Viseart matte palette and it was okay for me. I have owned several of their palettes but only bought the matte one to try out the other 2 were from Beautylish Lucky Bags.  The brand didn’t wow me to make another purchase from them.

@SportyGirly125 Have you purchased/enjoyed the ND ones previously? Most people really love the Viseart mattes but beauty items are so personal in general that it can work for someone flawlessly while not working for someone else at all.

@QueenMarceline I actually love ND. I think the last palette I bought was the Love palette. I have owned a bunch of her palettes

@QueenMarceline  I have several (many) Viseart palettes, and I LOVE them!  I have ND's too, but I rarely reach for those.  I think because I do get fallout with ND, and not Viseart.  Viseart's shadows are more subdued when applied; you won't get that super sparkly look like you can with ND and PM.  But, they are very smooth and I love them.  I've been wearing the Viseart Cashmerie and Violette palettes frequently.

107 Replies
Conversation Stats
Photos7
Are you sure you want to uncurate this?
Cancel OK
testing