Start a Conversation
Add a Photo
Turn on suggestions
Auto-suggest helps you quickly narrow down your search results by suggesting possible matches as you type.
Showing results for
Search instead for
Did you mean:
Post in Beauty Confidential
Posted 10-04-2022 | Updated Sunday

There was a ring I wanted from Express that was only $8+ dollars online.  Even though they have it available in-store, BOPIS wasn't available at my local store.  That pet peeve number 1.  Pet peeve number two is that I put it in my cart, as I was hoping Express would see it sitting there and offer me free shipping.  They eventually did, but by the then the ring was sold out online.  I even would have settle for another style, that but one was sold out, too.  I will go in-store sometime this week, but I bet the prices in-store won't be so low.

@greeneyedgirl107  That is truly irritating.  So odd that they don’t offer everyone free shipping but only those who need an extra push.

I just had a beauty pet peeve with Sally Beauty.  A location opened at my mall a year ago, but I made my first purchase there only recently.  I talked to the SA about the rewards program, and she told me there was a free $5 reward for joining.  Of course I joined.  I never got the reward so I contacted CS.  I was told they no longer offer the reward.  I went to Sally this week and even took a pic of the sign advertising the reward for joining.  I contacted them again.  Still, they would not honor it.  Their answer was that they reserve the right to make changes to their policy per their terms and conditions.  I understand this, and I understand that it's only $5.  However, it is a pet peeve of mine when you are told one thing verbally and in print, and in actuality it is something different.  It's amazing how there is disinformation/misinformation within a company.

This kind of reminds me of when my dad tried to buy my sister a Spice Girls doll in the 90s.  They were super hard to get, so we were only able to get her Baby Spice.  By chance my dad spotted a Ginger Spice doll and went to purchase it.  The sign said $19.99.  When the cashier went to ring him up, they claimed the doll was $25.  That was because Geri had just left the group.  My dad made a stink, paid the $25 and vowed never to patronize the store again.  This is a place he had been frequenting since 1984.  He was pretty true to his word, and only went there once in the 2000s b/c he was desperate for a pack of cigarettes and Rite Aid was sold out of Marlboro Lights.

@greeneyedgirl107  Ugh, it’s not about the amount.  It’s just feels sleazy to be offered something that they have no intention to follow through on.  pretty sure your photo has meta data and you could fight for that $5 cause that’s a legal issue if they had signage up.    Is it worth the time? Absolutely not, but sometimes it’s worth it for principle.

@greeneyedgirl107 I feel you on this. A couple of months ago Rose Inc had a set on their site that was a bronzer, a blush, and a highlighter, and they were all advertised in their regular packaging, including the “deal” was based on if the products were full-size/in their packaging. When I received my package, the blush was only a refill. I went to look at the website and yes, when selecting the blush shade, it showed that it was a refill, but all the promo shots were in regular packaging . I contacted their CS chat and they came off as kind of rude, telling me I couldn’t return it because it was a set, when all I was trying to point out was that the way it was marketed was misleading. Email was the same. It kind of soured me towards the company. I eventually saw a post on IG about the set and someone had made the same comment. Rose Inc actually responded that they had decided to change the product to a full size and to contact CS for a new blush. After that, I had no issues getting a new one but I was still kind of annoyed at the company. They have to have gotten so many complaints about it that they had no choice but to honor it.

@makeitup305 Glad you had power in numbers with this one, but it still sucks that you needed other people to make a stink before they'd do the right the thing.  And I know that your a fan of this company as I've seen your posts online.  So hence, you've been promoting the company for them - and this is what they do to you.

Yes, @greeneyedgirl107 I was a little sour about it. I'm half convinced that it was a mix-up and it was always supposed to be a full size and someone just messed up when doing the page. I just remind myself that people at CS are just doing their jobs and sometimes that is limited by the information they have.

Oooh, that irritates me too. Why is it so hard for corporate to honor it? @greeneyedgirl107

@Buootiful  Right?  They should have paid the $5 and taken the signage down.

@greeneyedgirl107 Sorry to hear about that. I had a similar experience at a restaurant. I had enough points to take my fiance out for dinner. I googled what restaurants accept the points before going out. When i went to pay with my points they would not accept them. It was really disappointing. Like your Dad I will not return to that establishment. The food also went downhill. So dissapointing. I also spent extra on drinks thinking everything would have been covered with my points.

@Mellmars1185 I'm so sorry to hear that!  What a bad end to an evening!  It's like you have to triple check everything these days.

@greeneyedgirl107 , yeah this gets me to.  Like why put it in print and not honor it once, then remove the sign 🤷🏽‍♀️🤷🏽‍♀️🤷🏽‍♀️. If they honored it, you might've felt more inclined to make purchases there in the future, but nooo 😑🙄.

Props to your Dad for holding onto a grudge staying true on that promise.  I have made a similar promise.

If I buy an expensive foundation Im hoping it matches my skin tone and that there is a shade that works for everyone.

some brands reccomenbed buying multiple shades of their foundation to “find my perfect match”. Why would the consumer want to buy multiple shades? Especially if its expensive- thats not realistic for people.

So true @sarahfogel , or y'know make enough shades for all, so you don't have to buy two.

@danielledanielle @sarahfogel - I so agree with both of you!  I am pasty white.  Buying multiple shades won't help me if you don't make shades light enough in the first place! 😖  Oh, and don't assume all light skinned individuals have pink undertones...grrrr.

Yes !! Brands can absolutely make enough shades that work for everyone if they want to. ✨

Psyched to post a haul after being in a funk and then.... 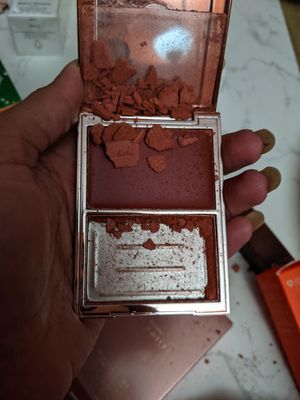 @danielledanielle that's seriously SO disappointing.  Like, you get that anticipation buildup and then *poof*

14 Replies
Conversation Stats
Photos902
Are you sure you want to uncurate this?
Cancel OK
testing